A research team from Moscow says it can identify when your chicken has been grilled just right, without even smelling or seeing it… 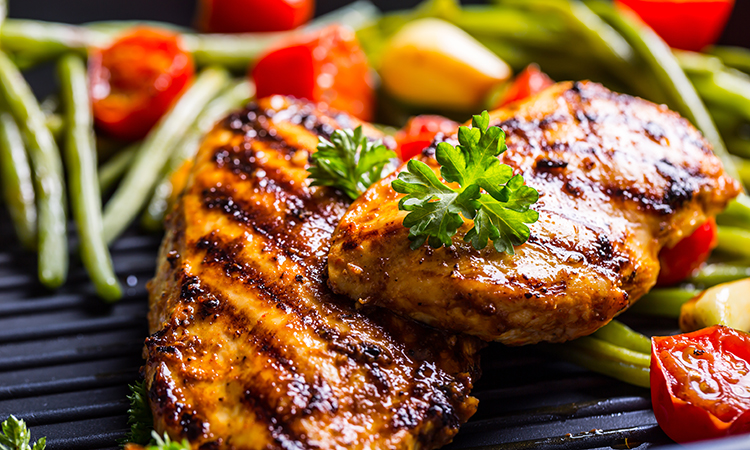 Researchers from Skoltech (The Skolkovo Institute of Science and Technology in Moscow) have found a way to use chemical sensors and computer vision to determine when grilled chicken is cooked just right.

These tools could help restaurants monitor and automate cooking processes in their kitchens, and perhaps one day even end up in your ‘smart’ oven, say researchers.

How do you tell that chicken breast on your grill is ready for your plate? You probably look at it closely, check the colour and temperature, and smell it to make sure it is done the way you like it. However, if you are a restaurant chef or head cook at a huge industrial kitchen, you cannot really rely on your eyes and nose to ensure uniform results up to the standards your customers expect.

As such, the hospitality industry has been actively looking for cheap, reliable and sensitive tools to replace subjective human judgment with automated quality control.

Professor Albert Nasibulin of Skoltech and Aalto University, Skoltech senior research scientist Fedor Fedorov and their colleagues decided to develop an ‘e-nose’: an array of sensors detecting certain components of an odour, to ‘sniff’ the cooking chicken and a computer vision algorithm to ‘look’ at it.

According to the research team, ‘e-noses’ are simpler and less expensive to operate than, for example, a gas chromatograph or a mass spectrometer, and they have even been shown to be able to detect various types of cheeses or pick out rotten apples or bananas. On the other hand, computer vision can recognise visual patterns – for example, to detect cracked cookies.

“To determine whether food is ‘done’ or not, one cannot rely on an ‘e-nose’ only, but instead has to use computer vision. These tools give you a so-called ‘electronic panel’ (a panel of electronic ‘experts’). Building on the great experience in computer vision techniques of our colleagues from Skoltech CDISE, together we tested the hypothesis that, when combined, computer vision and an electronic nose provide more precise control over cooking,” Nasibulin said.

The team chose to combine these two techniques to monitor the cooking of food accurately and in a contactless manner. They picked chicken meat, which is popular across the world, and grilled chicken breast (bought at a local Moscow supermarket) to ‘train’ their instruments to evaluate and predict how well it was cooked.

The researchers built their own ‘e-nose,’ with eight sensors detecting smoke, alcohol, CO, and other compounds, as well as temperature and humidity, and put it into the ventilation system. They also took photos of the grilled chicken and fed the information to an algorithm that specifically looks for data patterns.

To define changes in odour consistent with the various stages of a grilling process, scientists used thermogravimetric analysis (to monitor the number of volatile particles for the ‘e-nose’ to detect), differential mobility analysis to measure the size of aerosol particles, and mass spectrometry.

But perhaps the most important part of the experiment involved 16 PhD students and researchers who taste-tested a lot of grilled chicken breast to rate its tenderness, juiciness, intensity of flavour, appearance, and overall ‘doneness’ on a 10-point scale. This data was matched to the analytical results to test the latter against human perception, who will after all end up eating the chicken.

The team have reported that their system was able to identify undercooked, well-cooked and overcooked chicken quite well, so much so that it could potentially automate quality control in a kitchen setting. The authors do however note, that to use their technique on other parts of the chicken – such as legs or wings – or for a different cooking method, the electronic ‘nose’ and ‘eyes’ would have to be retrained with new data.

The researchers now plan to test their sensors in restaurant kitchen environments.

One other potential application of this technology could be ‘sniffing out’ rotten meat at the very early stages when changes in its smell profile would still be too subtle for a human nose.

“We believe these systems can be integrated into industrial kitchens and even in usual kitchens as a tool that can help and advise about the ‘doneness’ degree of your meat, when direct temperature measurement is not possible or not effective,” Fedorov said.

The paper detailing the results of this study, which was supported by a Russian Science Foundation grant, was published in the journal Food Chemistry.