Claire Milligan of R-Biopharm Rhone examines the issue of aflatoxin M1 in milk and dairy products, and explains why it’s a problem that has not yet been solved by the food industry despite being around for a while. 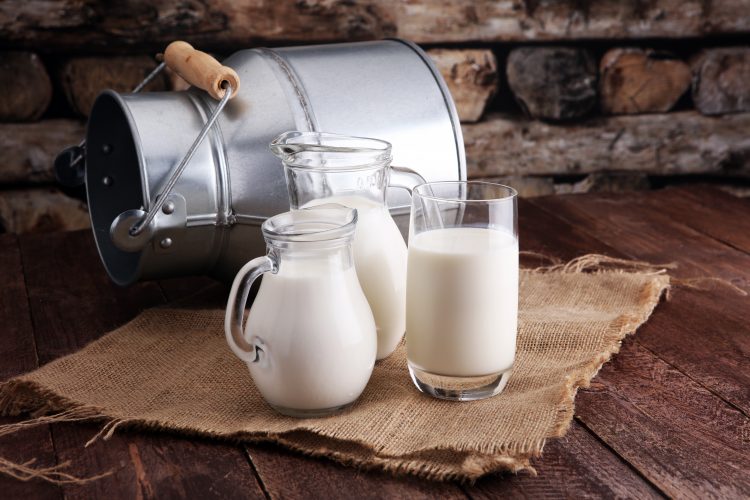 If animal feed intended for use for dairy cattle contains the fungal metabolite aflatoxin B1, it will be metabolised by the cow in the rumen. Between one and four percent of the aflatoxin B1 metabolite (known as aflatoxin M1) will be transferred into the milk. This hydroxylated metabolite, although less toxic than the parent compound, is nevertheless classified as a probable human carcinogen.

As might be expected, tough measures are in place to control and mitigate the presence of aflatoxin B1 in animal feed, and thereby minimise milk contamination. Nevertheless, due diligence by the dairy industry is essential to ensure that both raw milk and dairy products contain minimal levels of aflatoxin M1 and certainly amounts below the demanding regulatory limits. 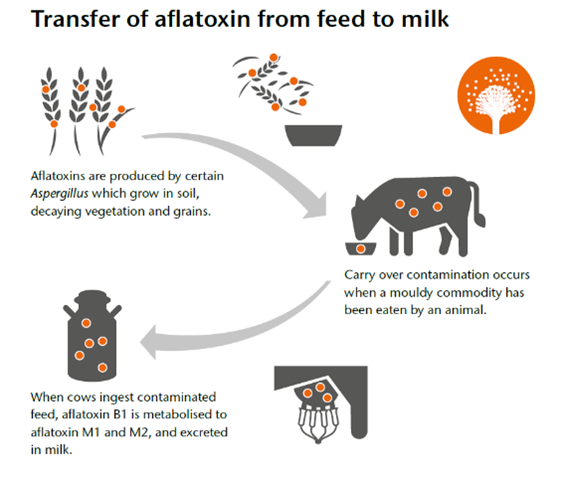 Aflatoxin M1 survives heat treatment so pasteurisation or sterilisation of milk has little impact on reducing levels of contamination. The toxin is not very fat soluble, so it does not readily transfer into cream and butter, but some concentration can be expected into other low-fat products such as yoghurt and soft cheese.

Also, where milk is used as an ingredient of other products (and in particular one thinks here of infant formula), vigilance is again required concerning potential aflatoxin M1 contamination. Some other mycotoxins can also transfer from animal feed into milk and there is some recent evidence of ochratoxin A (OTA) being found in milk samples from different parts of the world.

The EU has the strictest regulatory limits in the world for aflatoxin M1 for raw milk, heat-treated milk and milk for the manufacture of milk-based products with a limit of 0.05 μg/kg (ppb). For infant formula and follow-on formula, the limit is even lower, set at 0.025 μg/kg.

Other jurisdictions around the world have either adopted limits in line with those of the EU, or in the case of the US, have adopted a higher limit of 0.5 μg/kg for aflatoxin M1 in milk. There are no formal regulatory limits for mycotoxins other than aflatoxin M1 at the present time, although regulations are constantly under review being kept in line with risk assessments.

Fortunately, there are excellent well-established methods of analysis for monitoring aflatoxin M1 in milk, dairy products, and infant formula. Official methods recognised by AOAC International,1 European Standards Organisation (CEN),2 and International Dairy Federation (IDF)3 all use an immunoaffinity column (IAC) for sample preparation. The attraction of this technique is that a milk sample can be directly passed through the IAC and the aflatoxin M1 is selectively removed. After washing the column, the toxin can be eluted and then determined by HPLC with fluorescence detection.

Employing an official method which has been fully validated by an inter-laboratory collaborative study provides assurance as to the accuracy of results, which are reproducible by others following the same procedure. Whether analysis is conducted in-house by the dairy industry or by contract laboratories, mutual recognition of results is important and can only be guaranteed by pursing fully validated methods. 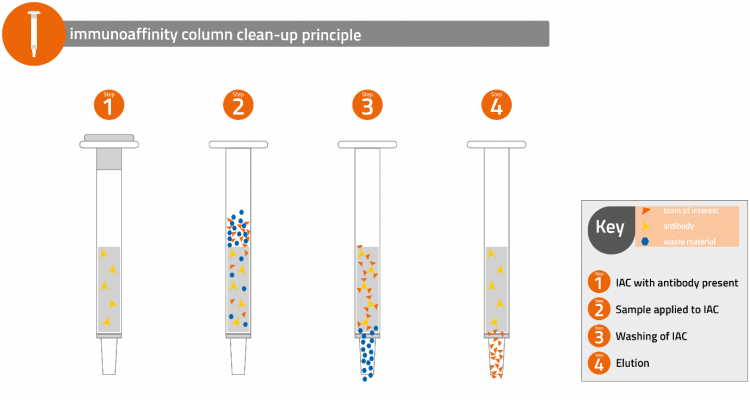 In the future there may be a need to determine more than one mycotoxin in milk and there are IACs available for multi-toxin analysis4 which are ideal for this purpose, eg simultaneous determination of aflatoxin M1, B1, B2, G1, G2 and OTA.

There have been a huge number of surveys carried out across the world to try to assess potential human dietary exposure to aflatoxin M1 and to understand the extent of compliance with regulatory limits. Compiling data from scientific publications to try to gain an overview is not an easy task. Data is frequently reported in different formats, such as percentage numbers of samples containing detectable aflatoxin M1, mean and maximum levels and range of levels of aflatoxin M1, as well as percentages exceeding regulatory limits.

There are also differences in levels of aflatoxin M1 in milk depending on when surveys were conducted, as invariably levels are higher in winter periods, when dairy cattle are more dependant of feed rather than outside grazing. Differences also exist between years, as climatic conditions from one year to the next can impact the extent of aflatoxin B1 feed contamination. Data from more than a hundred scientific publications over a 10-year period reporting aflatoxin M1 survey data have been summarised in the figure below. Surveys conducted in different countries have been aggregated by geographical region into Africa, Asia, Europe and Americas and the results shown in terms of the percentages of samples exceeding either the EU or USA regulatory limits for aflatoxin M1. 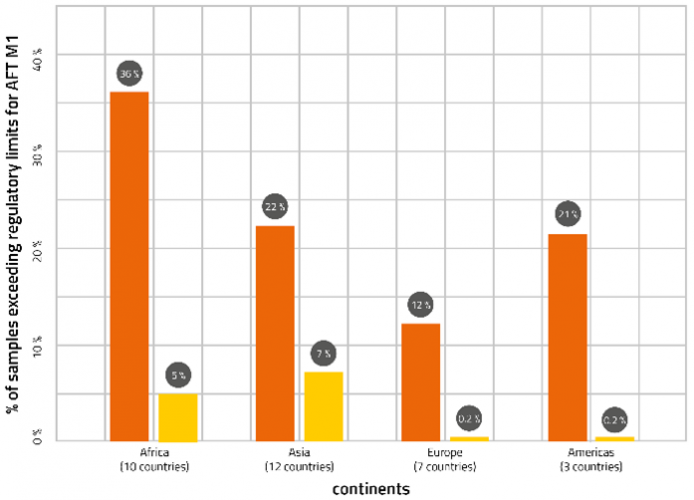 Exceedances of the EU limit range from 12 to 36 percent, while exceedances of the US limit range from 0.2 to seven percent. In one worse-case survey of 35 milk samples, all exceeded the EU limit and 80 percent exceeded the US limit, while in a best-case survey of 170 milk samples 11 percent contained detectable aflatoxin M1, but none exceeded regulatory limits for either jurisdiction.

It is interesting to note that aflatoxin M1 contamination is not limited to cow’s milk – buffalo, goat and ewe milk have also been found to be contaminated. A diverse variety of dairy products have been found to contain aflatoxin M1 including yoghurt, whey and whey products, fermented milk products and cheeses as well as many different types of milk based traditional foods. There is also considerable interest in monitoring human breast milk for levels of aflatoxin M1, as this is indicative of the mother’s exposure to aflatoxin B1 from diet. The same method of analysis can be applied for human breast milk as for cow’s milk, the data providing insights into overall exposure of babies to aflatoxin M1.

A future need for continued surveillance

Aflatoxin M1 contamination of milk is not a new problem, but one which has been known and recognised for some decades. Some progress has been made in enforcing strict regulatory controls on animal feed and in the use of aflatoxin binders in feed for mitigation.

Nevertheless, monitoring milk for aflatoxin M1 is still essential for the dairy industry to ensure an adequate level of consumer protection. It is important to note that in order to generate accurate and reliable aflatoxin M1 data, laboratories should use methods involving IAC extraction and clean-up which represents the ‘gold-standard’ in aflatoxin M1 analysis.

Claire Milligan has been working in the food and feed industry for over 20 years primarily focusing on mycotoxin analysis using a variety of test kit platforms. She initially started her career within a production environment, but moved into Product Management upon joining R-Biopharm Rhône. She is currently responsible for the immunoaffinity product range and provides technical and field support where required.

R-Biopharm Rhône is a developer of test solutions for food and feed analysis offering products for various applications, including the analysis of allergens, mycotoxins, vitamins, antibiotics and many more. 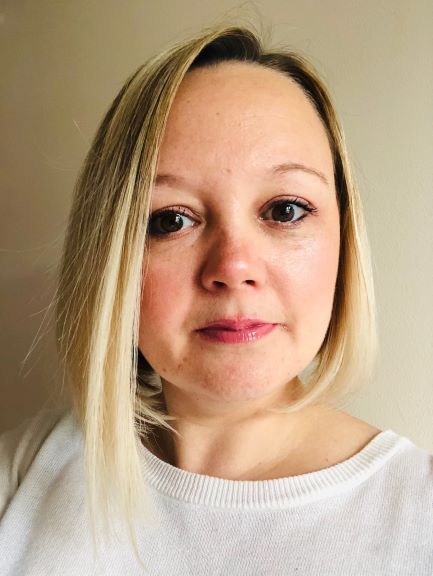