Rebranding without limitations – an interview with Small Giants

Small Giants Co-Founder, Francesco Majno, discusses why it was necessary to rebrand his insect-based snack company, and why insects are more sustainable as a food than traditional meat and fish products. 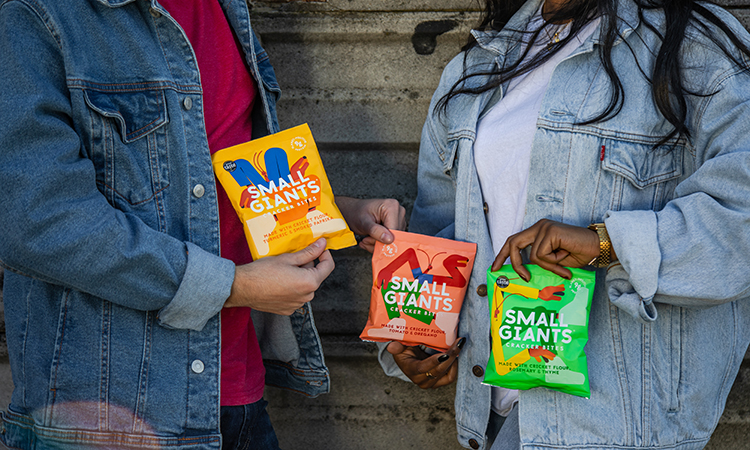 Insect protein is on the rise. In fact, just last month the European Food Safety Agency (EFSA) approved mealworms for consumption, making the darkling beetle larvae the first insect to be given the green light by the agency.

We spoke to Francesco Majno, co-founder of Small Giants (formerly Crické) to ask what’s changed since his last contribution to New Food, and discuss the nutritional and environmental benefits of insects as a food.

Francesco Majno (FM): Since we last spoke, we built a new brand, transforming Crické into Small Giants, and created a new range of insect-based healthy snacks. We won Great Taste award stars and have launched nationwide in UK supermarket Sainsbury’s.

After launching our first range of insect-based snacks as Crické, we have been growing quite fast and there were opportunities to scale-up even further; we closed an investment round of £150K in March 2020, for example.

Q: How did you come to launch your business?

FM: I have been friends with Eduardo (Edoardo Imparato, Co-Founder and Managing Director) for a long time. At the time, we were learning about edible insects. We were discussing why we don’t eat them ourselves when they are a normal part of people’s diets elsewhere, most notably in East Asia.

We started to think about how best to introduce them to Western diets. We came up with the idea of using insect flour to make crackers as high protein snacks. Our first Crické product launched in March 2019 to test the readiness of the market. We then took all the lessons from that first product and fed it into the development of our new brand Small Giants, which launched last November.

Despite the massive growth of the savoury snacks category, there is a gap in the market for high-protein products with a strong focus on innovation. Apart from roasted peas or nuts, all other products have less than 15 percent protein.

Cross-product innovation between potato chips and biscuits is one of the most important drivers of growth in the UK and in continental Europe – the boundary between traditional potato chips and savoury biscuits is being constantly blurred. Challenger brands and established companies invested a lot in developing new products that are in between the two – for example United Biscuits relaunched Jacob’s in 2016.

Nevertheless, there is no real challenger brand in this space and, especially on the savoury biscuits side, there has been no or very little innovation in the last 10 years. 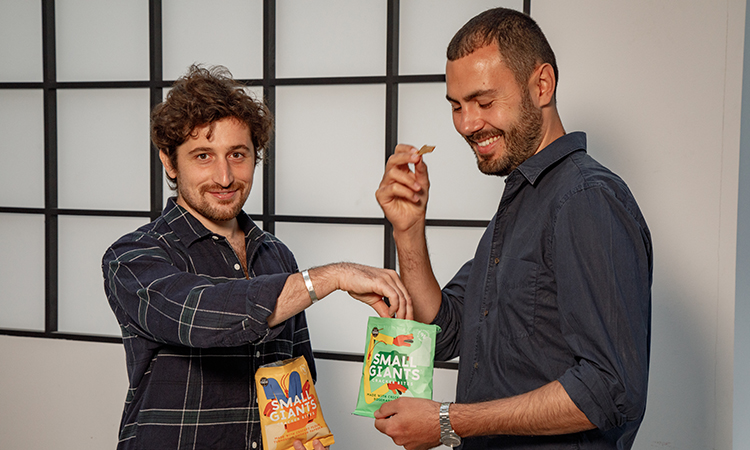 Q: Why did you rebrand to Small Giants?

FM: The first brand, Crické, had been entirely crafted by us with a very limited budget, so it had a few drawbacks and areas to improve on. These included difficulty in pronouncing Crické, as well as the name not supporting the product expression and not clarifying the product‘s nature.

Crické referred exclusively to crickets, limiting the possibility of expansion to other insects. The brand expression did not always meet our customers’ expectations and its ‘essence’ needed to be better aligned to our brand values.

The new brand needed to be both visually and verbally striking to make people sit up and listen. By creating some giant cricket characters entirely covering the front of the pack, we’ve certainly grabbed people’s attention.

Product-wise, we had a completely different approach. We want people to be reassured by the familiar shape, texture and taste of our snacks. How do you tackle the ‘yuck’ factor? We think the only way is by giving edible insects a familiar form that can help anyone to try them for a first time and to understand that they are tasty and nutritious. That’s why we make mini crackers with high protein cricket flour instead of whole insects.

Q: Can you explain why insects are a sustainable food source?

FM: It’s very simple really; we have a growing population to feed, but our food system is broken. Protein, in particular, is a problem. We are currently relying on unsustainable protein sources.

One of the most promising sustainable sources of protein is insects. They are a natural source of protein, but they require a fraction of the resources in terms of water, land, feed and energy, for the same amount of protein.

The greenhouse gas emissions of insect farming are much lower than those of typical livestock farming. You can also farm insects vertically, which you can’t do with cows or pigs. It’s even possible for people to farm insects in their own urban homes.

Q: How does the nutrition of your edible insects compare to meat?

FM: Crickets contain the same quality of protein with all the essential amino acids. In meat and fish the protein content is usually around 16-25 percent, in cricket powder it’s 70-75 percent.

Cricket powder, similar to beef, is also high in vitamin B12, which is important for the immune system and something vegan and vegetarian diets tend to lack. Typically, we find that vegetarians are open to trying edible insects, but vegans are not. It really depends on their reasoning for undertaking that particular diet. If they have chosen it for environmental reasons, we find they are normally open to trying insect-based food.

Francesco Majno is co-founder and CMO of Small Giants – a new food brand specialising in insect-based savoury snacks. He has an MA in Communication Design and has worked for five years as Information Designer and Project Manager in business consultancy and international design firms.