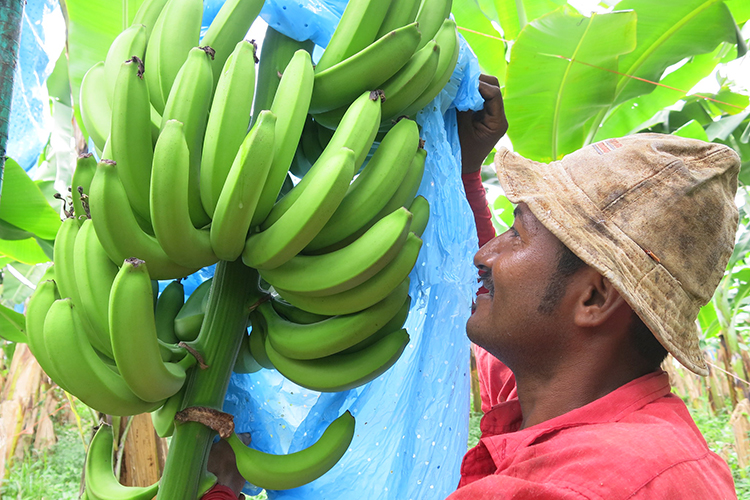 The disease is threatening bananas in Latin america, which is the world's biggest exporter of the fruit. Credit: Rainforest Alliance

Bananas are facing a significant threat, which could lead to them being wiped out entirely unless something is done very soon.

Rich in Vitamin B6, Vitamin C, Manganese, Potassium, dietary fibers and protein, bananas are a popular snack, breakfast topping and dessert. In fact, bananas, including dessert banana, plantain and cooking banana, are the eighth most important food crop in the world, and the fourth most important in the least developed countries.

What is Tropical Race 4?

Tropical Race 4 (TR4) is a fungal disease discovered in Asia during the 1950s, (known then as Panama Disease). It ripped through farms in Asia before spreading to Central America. Despite coping with the blight for over half a century, the spread of the disease has accelerated in recent years. TR4 can now be found in Australia, Africa, the Middle East and Latin America.

The world’s leading exporter for bananas is Ecuador, followed by the Philippines, Costa Rica, Guatemala and Colombia. While the biggest importers are the European Union and the United States.

Research is underway for a solution to overcome this banana pandemic, which will be particularly important for South America. According to BBC, scientists in Australia have developed a genetically modified banana that is resistant to TR4, but this is yet to be approved by regulators as safe for human consumption. For now, all farmers can do is use containment methods such as washing boots and making sure infected plants are quarantined.

Leonie Haakshorst, Sector Lead Banana & Fruit at the Rainforest Alliance, was keen to stress the broader threats to the banana industry beyond TR4. “Banana farmers are at the front lines of the climate crisis,” Haakshorst noted. “Because bananas are the world’s most popular fruit, their production is often linked to high pesticide use, low prices and wages, and violations of workers’ rights.

“The Rainforest Alliance started its banana certification program nearly 30 years ago, pioneering more sustainable production in this challenging sector. We focus on helping farmers practice profitable, more climate-smart agriculture with respect for nature, workers and communities. Together with many allies – from farmers to retailers and other stakeholders in the sector – we are working on raising the bar for more sustainable banana production”.