Dr Sylvain Charlebois from Dalhousie University explores how the banana industry is adapting to modern needs and constraints. 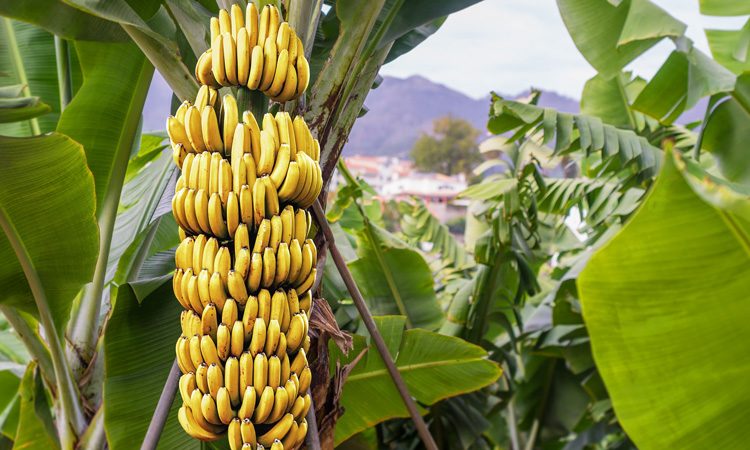 The world could run out of bananas. Over the summer, reports suggested that a banana-killing fungus, Fusarium TR4, also known as the Panama disease, reached Latin America for the first time and could spread further. It will affect crops sold to the US and Canada. After having been detected in the Middle East, Asia, and Australia, many experts were expecting the highly contagious fungus to reach the Americas within the next five years. However, Columbia discovered its first case early August, and some suggest Ecuador could be next. Even though this deadly fungus poses no threat to humans, the situation could be devastating for the crop, and for the thousands of farmers who rely on bananas for survival.

Fusarium TR4 typically spreads at the rate of about 100 kilometers a year. Banana plants are asexual, which means the disease can spread more quickly through genetics. It spreads through human activity, on clothing and footwear, and can remain dormant in soil for decades. Most bananas we consume in Canada are from Latin and South America. Our top suppliers are Guatemala, Costa Rica, Columbia, and Ecuador, and some experts expect most of these markets to be infected by the deadly fungus within the next few years. Bananas are not only an important food source for Latin Americans domestically, they are also one of the most important exports coming out of the region.

No known fungicide or other treatment has proven to be effective against the disease. Given that these crops grow in poorer regions of the world, support for research in plant science has not been a priority. Breeding bananas is also extremely difficult and expensive, due to their botanical nature. Other than strict bio-security measures, nothing can stop the disease from spreading further. Banana growers are taking steps, asking workers to clean their clothing as they enter the plantation, to limit risks.

The crop is suffering from what is known as monoculture. Commercial plantations grow almost exclusively one clonal variety called the Cavendish. This is the type of yellow banana that most Canadians are acquainted with. With similar genetics, monocultures are always unsustainable, as the disease can spread much more rapidly. As a contrasting example, Canada is home to over 7,000 different varieties of apples. More cultivars, fewer risks.

Ironically, the Cavendish variety was created in the early 20th century to offset the spread of another disease. An earlier strain of Panama disease nearly eradicated the global supply of the Gros Michel banana. Chiquita and Dole switched production to a variety they knew to be resistant to Panama disease. That’s how the Cavendish was born. Almost half of all bananas around the world are Cavendish, which is known for its adaptability to large-scale production, and extended shelf life when being transported around the world. But now, companies have nothing in the pipeline to replace the Cavendish, which may explain why the industry is currently in a state of panic.

Meanwhile, in Canada, we go bananas for bananas. They are a major staple in Canadians diets. We import well over $600 million worth of bananas annually, and the average Canadian will consume more than 15 kilos of bananas per year. More than nine percent of all fruits imported into Canada are bananas. Furthermore, bananas are adapting well to modern food inclinations. They are portable, can be eaten anywhere, require no refrigeration, have a natural peel for food safety, require no plastic wrapping to carry them around and are quite nutritious. Bananas have also survived the attacks of many dietary preferences. Few diets exclude bananas. What’s more, they have always been affordable, well, at least until now.

Bloomberg has reported that the price for US imported bananas are breaking records these days due to diseases. The price exceeded $1,200 per metric tonne for the first time this year, and markets are expecting prices to rise further. At some point, retail prices will start to reflect these higher farmgate prices.

But we don’t expect to run out of bananas anytime soon. Both Chiquita and Dole have much to lose. Several plantations are already under quarantine and will be protected by highly restrictive bio-security measures. Bananas will continue to be sold in the US and Canada, but you can expect your budget to suffer in the months to come because of what is happening to the Cavendish variety.

For the sake of the fruit itself, farmers need more cultivars. For its survival, banana breeding will be key moving forward. In fact, in the past few years, breeders have even been able to create an edible peel, but this type of banana costs $8 each. This is a great solution for our food waste problem, but it is not the price point you want. So much work remains to be done. And if you think Canada should grow its own bananas, well, we are already doing so. Canada Banana Farms, located in Ontario, produces bananas, but on a very small scale. The Halifax Public Gardens also has bananas now, growing outside. Some reports suggest that farmers in Saskatchewan, Alberta, and Quebec are also setting up their own tropical fruit greenhouses. Interesting projects, but Canada’s plant scientists, many of whom are international renowned, could perhaps help Latin America with its breeding program. That might be more worthwhile.

But before Canada becomes a banana powerhouse, we continue to rely on imported fruits, so let’s hope our friends down south can figure out how to mitigate risks from Fusarium TR4, with or without our help.

Dr. Sylvain Charlebois is a professor in food distribution and policy in the Faculties of Management and Agriculture at Dalhousie University in Halifax, Canada. He is also the Senior Director of the Agri-food Analytics Lab, also located at Dalhousie University. His current research interest lies in the areas of food distribution, security and safety.