Dr Sylvain Charlebois reveals all to New Food as he reports the findings of the first ever Global Food Innovation Index. 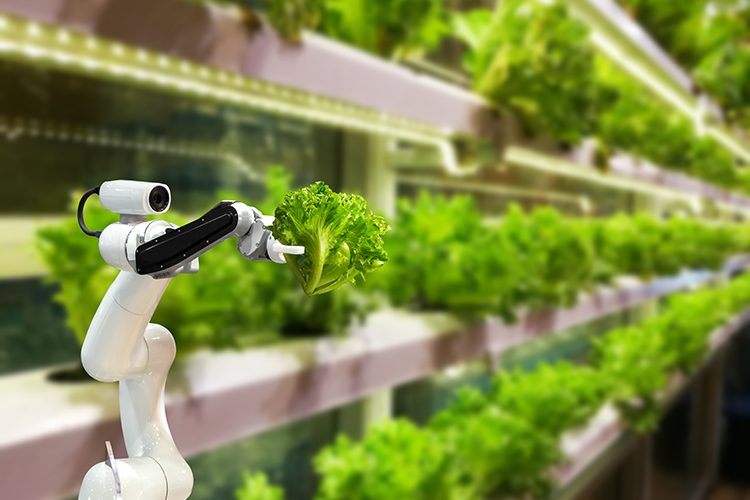 The Global Food Innovation Index judges countries on four distinct categories before coming up with a final results table.

Food innovation has become a focal point for most countries in recent years as Governments recognise the importance of growing economies in both rural and urban settings. However, some countries have achieved greater success in fostering a culture of innovative thinking for the food industry than others. Benchmarking countries using specific innovation pillars has never been conducted, until now. The Agri-Food Analytics Lab at Dalhousie University in Canada compares how countries have been enabling proper conditions for the industry to innovate further. To our knowledge, this is the first attempt to compare countries on food innovation specifically.

The Global Food Innovation Index compares factors contributing to innovation in the food, beverage and agri-food industries across the following 10 countries: Canada, US, Mexico, UK, France, Germany, Italy, the Netherlands, Japan, and Australia. Each country was selected to provide geographic diversity within the sample, as well as to compile a sample of mid to top performing countries in terms of GDP. Considering this index was generated from a Canadian context, countries were also selected based on trade capacities and competitiveness.

How was the index compiled?

The index was developed with the support of Innovation, Science and Economic Development Canada, and with Food Health Consumer Products Canada, the association representing food processors in Canada. The index is separated into four main pillars: Regulatory Environment, Business Competitiveness, Market Readiness, and Intellectual Property and Research and Development. The model of the Index (Figure 1) is shown below. 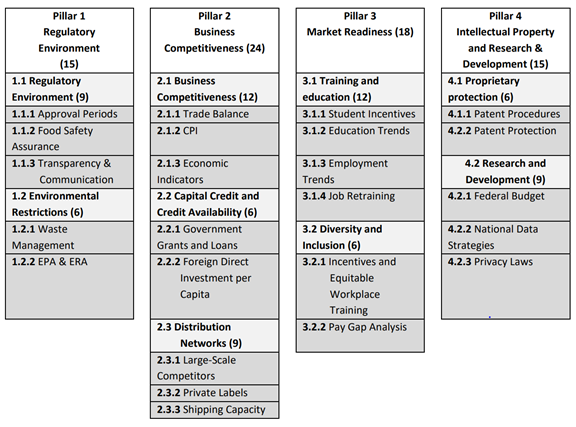 ‘Regulatory environment’ contributes to innovation through implementing guidelines and laws that businesses must follow when releasing new food products. Business competitiveness provides context of how new products may perform based on a country’s economy, how products can be distributed within a country, and what the competition is like for new food products or businesses. Market readiness is important for encouraging innovation, as it provides an overview of employment and earning prospects as well as incentives for minorities to enter the food production industry. Intellectual property examines how new inventions are protected, how information is shared, and what sort of funding exists to support innovators.

For the Global Food Innovation Index, each pillar was divided into sub-pillars, with each one consisting of several criteria that countries would be evaluated on. Each criterion was worth three points, which were added to create a total possible score of 75 across all four pillars. Data was collected mostly from Government websites, where available, in the summer of 2020.

Based on the scores for each pillar, the results were weighted so not to penalise countries in cases where data was not available/accessible. Weighted results re-balance the data to more accurately reflect how countries are performing based on metrics where we could find data. It has thus been concluded (Figure 2) that the UK ranked first, the US second, Germany third, Australia fourth, Canada fifth, the Netherlands sixth, Japan seventh, Mexico eighth, France ninth and Italy tenth. 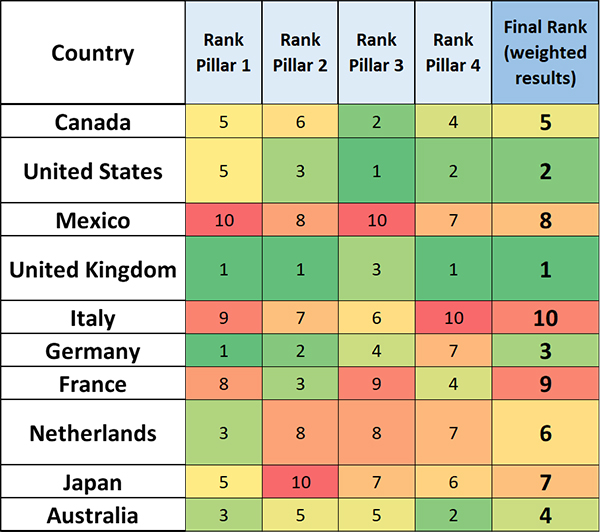 This new index offers a glimpse of the innovative environment countries offer to the food industry, from a macro-perspective. That said, most of the survey results were not surprising. In fact, some results were expected. Larger countries were favoured under pillar one (regulatory environment). Both the UK and Germany ranked well in this category. Europe’s continental regulatory approach to innovation appears to support larger countries, although France’s performance is difficult to explain. The US also scored well, as the regulatory environment tends to be less cumbersome, especially when compared to Canada. France did poorly with metrics outlined under pillar one. Canada’s lengthy approval period is what penalised the country for this metric.

The UK also performed well under pillar two (business competitiveness). The Netherlands also showed promise, as its macroeconomic metrics were very strong compared to other countries. Whereas Italy and Mexico did not do well under pillar two. Market readiness (pillar three) pushed both North American countries to the top. The US and Canada did very well when training and education, and diversity metrics were considered. Policies in other countries were not considered as robust. Mexico, France and the Netherlands did poorly when evaluating metrics under pillar three.

Finally, for pillar four (intellectual property, research and development), the UK, Australia and the US came out on top. On the hand, Mexico, Italy, France, and Germany, did not accumulate many points for this pillar.

Limitations to bear in mind…

Some limitations ought to be considered when reading these results. The most significant limitation affecting data collection was language. While there is translation software available, some information was difficult to translate. Government policies on data sharing also posed a barrier to data access. For example, many Governments do not share a public, detailed budget, reflecting a different level of comfort with – and expectation of – Government transparency. Also, many Governments do not share their transportation data, although this is likely for national security reasons.

The Index will officially be released in early 2021.

4 responses to “Which countries are true food innovators?”