Kombucha and the fermentation wave

New Food’s Joshua Minchin speaks to Remedy’s UK General manager, Anna Dominey, about kombucha, and finds out why the beverage is riding high on a wave of interest for fermented foodstuffs. 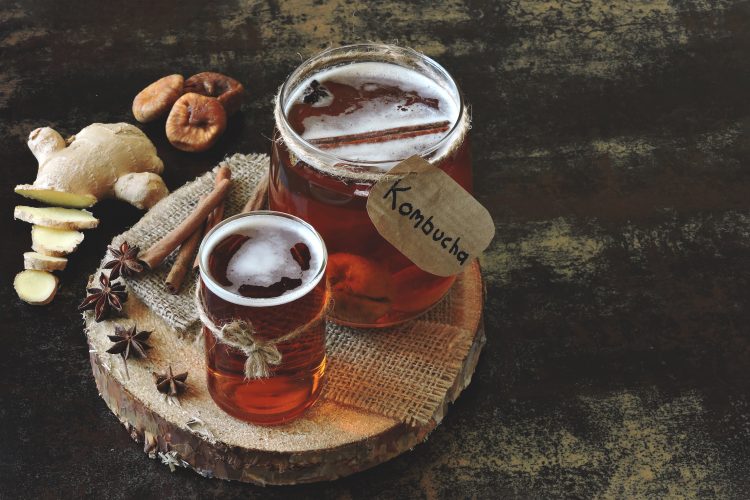 Kombucha is on the rise. It’s a beverage many are perhaps unaware of, yet one that is continually growing and has been a part of the surge of fermented drink products making their way to supermarket shelves and bars the world over.

Kombucha is a fermented drink made with tea, sugar, bacteria and yeast; or as Anna Dominey, UK General Manager at Remedy (which specialises in kombucha and other fermented soft drinks) describes it “a healthy, tasty, natural, soft drink”.

Dominey, however, isn’t keen on the ‘fermented tea’ description, suggesting it has a less than appealing sound. “As soon as you say that people kind of screw their face up a bit and say, ‘that sounds weird’!”

The beverage dates back around 2,000 years, when fermentation was one of the key methods of preservation. “Essentially to make kombucha you just need tea, sugar, water, and a live culture,” she explained. The bacteria and yeasts convert the sugar into ethanol and acetic acid, which gives kombucha its distinctive sour taste.1

How do the professionals make it?

The manufacturing process of Remedy’s kombucha is slightly more complex than simply adding culture to a pot of tea.

“We brew our kombucha for about 30 days,” explained Dominey. “The challenge with kombucha is it can have a vinegary taint to it – I think for the amateur homebrewer it can be a bit of trial and error at the beginning.

“One of the reasons we brew ours for 30 days is all of our drinks are naturally sugar-free. You need to put sugar into the original liquid to feed the fermentation process – you can’t make kombucha without sugar. Over time that sugar is ‘consumed’ by the cultures that are created through the fermentation; they store it inside their cells for energy. This then all gets converted into live cultures and organic acids.

“We then sweeten at the end with a plant-based sweetener, just to balance that taste out (stevia and erythritol), because otherwise it would be a little on the sharp side.” 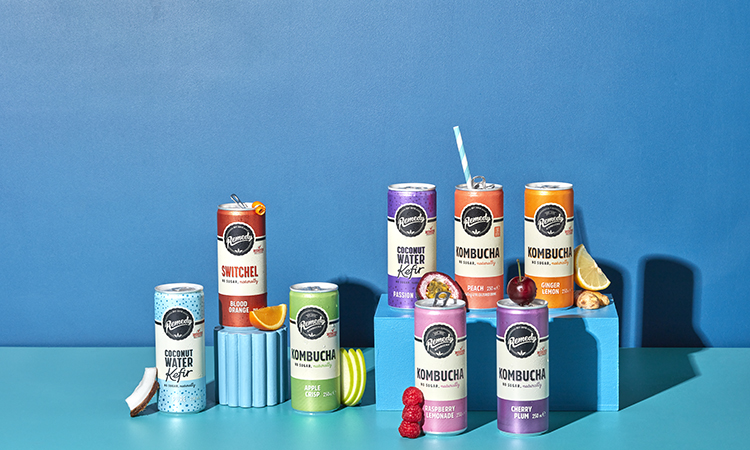 Remedy’s range of fermented drinks includes not only kombucha, but also kefir and cider vinegar based beverages

Why is kombucha seen as a healthy drink?

The global kombucha market size was worth $1.67 billion in 2019 and this is expected to expand at a revenue-based CAGR of 19.7 percent between 2020 and 2027.2 One reason for this fairly rapid rise is its perceived health benefits3,4 although it’s worth noting studies providing evidence of such health benefits are sparse.

Reducing sugar in food has been a big topic for some time now. The National Food Strategy, recently published by Henry Dimbleby, has called for a tax on foods high in sugar and salt, and brands which produce foods high in fat, salt and sugar will not be allowed to advertise their products before 9pm in the UK.

“We know people are increasingly aware of sugar in their diet and trying to find easy swaps to reduce the amount of sugar they’re consuming,” said Dominey. “Our drinks and sugar-free and we only use natural ingredients.”

She cited the rising interest from consumers over ultra processed foods and links to longer term health issues. As such, she believes that products made through natural fermentation have a bigger appeal.

“In a 250ml can of Remedy kombucha there are only seven calories.” She compared Remedy to bigger named soft drinks, citing them as “very calorific” in contrast. “I can have a couple of cans of kombucha a day and not really think about it.”

Another aspect alluded to by Dominey was the increased interest around fermented foods in general. “I think fermented foods, such as kimchi, sauerkraut, and kefir, have really witnessed a boom in the last few years alongside kombucha.”

She continued: “People are increasingly exploring gut health, and understanding the role that fermented foods and drinks can play in their diet.5 A can of Remedy has 250 million live cultures per 250ml can, plus organic acids. In addition, because it’s tea-based you also get a lot of tea polyphenols, which are a natural antioxidant.”

But when would you drink kombucha?

It’s perhaps fair to say that a drink based on fermented tea sounds like it has very few use cases. However, the truth is actually somewhat different, as Dominey revealed.

“That’s one of the really interesting things about kombucha – it can slot into lots of different occasions; about 20 percent of our consumers drink it in the evening instead of having an alcoholic drink, for example. Because it’s kind of got the complexity of flavour, it’s a bit more interesting than having a glass of squash or cordial in my opinion. As it’s very low in caffeine, it’s also fine to have at night!” she said.

It’s as an accompaniment to alcoholic drinks that kombucha has seen a real demand around the world though, which might surprise a few. Without trying it first, it could be difficult to understand how the seemingly strong flavours that a fermented product produces could marry with a spirit, but in according to Dominey, in some places it is the norm to use kombucha as a mixer for an alcoholic beverage.

“We have a cocktail on a menu in a big pub chain and that sells extremely well because it’s quite low in calories. Cocktails traditionally can be quite high in calories, due to the sugar contents and I think people are conscious of that,” she said.

“When I was in Australia, a lot of people were having gin and kombucha parties – not that I got invited, the young people were having them! Because you’ve got the sweet and sour notes in the drink, it has that kind of depth and complexity of flavour, which works really well as a mixer.”

Kombucha has certainly benefitted from an increased interest in fermented products. Kefir, cider vinegar and kimchi are all food products that were not on anyone’s radar five years ago, yet are now household names. Although it’s fair to say that kombucha isn’t quite as universally recognised as much as say kimchi is just yet. But Dominey is confident that both Remedy and kombucha in general are heading in the right direction.

“I think the market is evolving so rapidly. COVID-19 did slow the development of the kombucha market down a little bit, just because that on-the-go occasion ceased to exist. But that was where I think a lot of people were discovering kombucha,” said Dominey. It’s true that the opportunities for consumers to discover new products by accident whilst buying their lunchtime have been limited, and indeed Dominey is correct in suggesting that the lack of footfall in supermarkets like Marks and Spencer, a stockiest of Remedy, has had an impact on the sector.

But as people begin to return to offices and social appointments, and that need for on-the-go food returns, who can say that many will not eye up a can of kombucha over their normal choice of soft drink?