The making of a superfood? The key relationship at the heart of kefir

Research teams from around the world have been investigating how kefir is made and how can it be made more appealing for consumers. 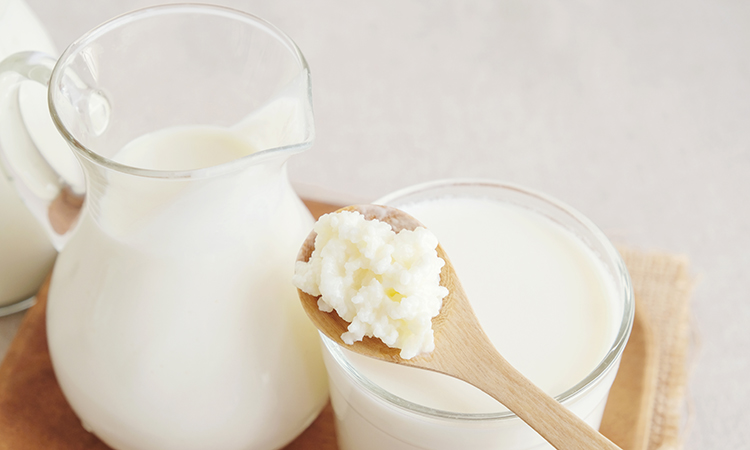 Kefir is considered by many to be a superfood with several health benefits.

New research from the European Molecular Biology Laboratory (EMBL) and Cambridge University’s Patil group and collaborators, published in Nature Microbiology, has revealed the complex microbiological relationship central to the production of kefir.

Kefir is one of the world’s oldest fermented food products and considered by the research team to be a ‘superfood‘ with many purported health benefits, including improved digestion and lower blood pressure and blood glucose levels.

After studying 15 kefir samples, the researchers discovered to their surprise that the dominant species of Lactobacillus bacteria found in kefir grains cannot survive on their own in milk – the other key ingredient in kefir. However, when the species work together, feeding on each other’s metabolites in the kefir culture, they each provide something another needs.

“Cooperation allows them to do something they couldn’t do alone,” said Kiran Patil, group leader and corresponding author of the paper. “It is particularly fascinating how L. kefiranofaciens, which dominates the kefir community, uses kefir grains to bind together all other microbes that it needs to survive – much like the ruling ring of the Lord of the Rings. One grain to bind them all.”

A model for microbial interactions

Consumption of kefir originally became popular in Eastern Europe, Israel, and areas in and around Russia. It is composed of ‘grains’ that look like small pieces of cauliflower and have fermented in milk to produce a probiotic drink composed of bacteria and yeasts.

“People were storing milk in sheepskins and noticed these grains that emerged kept their milk from spoiling, so they could store it longer,” added Sonja Blasche, a postdoc in the Patil group and joint first author of the paper. “Because milk spoils fairly easily, finding a way to store it longer was of huge value.”

To make kefir, you need kefir grains. These can’t be artificially made, but must come from another batch of kefir. The grains are added to milk to ferment and grow. Approximately 24 to 48 hours later (or, in the case of this research, 90 hours later), the kefir grains have consumed the nutrients available to them. The grains grow in size and number in this time and the kefir process is complete. The grains are removed and added to fresh milk to begin the process anew.

“The kefir grain acts as a base camp for the kefir community, from which community members colonise the milk in a complex yet organised and cooperative manner,” said Patil . “We see this phenomenon in kefir, and then we see it’s not limited to kefir. If you look at the whole world of microbiomes, cooperation is also a key to their structure and function.”

Despite the supposed health benefits of kefir, consumption levels remain fairly low worldwide. In addition to understanding how kefir is made, scientists have also been looking into making it more appealing to consumers through the use of sweeteners.

In an article appearing in the Journal of Dairy Science, scientists studied the effects of kefir sweetened with five different sugars on sensory acceptance and emotional profile in regular consumers of fermented dairy products.

The results of the study suggest that demerara sugar or fructose should be used as a substitute for sucrose in the production of sheep milk kefir to increase consumption after they elicited the best sensory response. The study found that kefir sweetened with brown sugar rated poorly with participants.