Professor Chris Elliott outlines how price increases are serving fraudulent activity and the ways in which food fraud is beginning to manifest in the UK using rice as a key example.

Like many other commentators, I have discussed the massive rise in food prices; and based on what I understand from economic experts, this will keep increasing until at least the end of spring, with the potential to continue into the summer.

Price pressures which are passed down supply chains is one of the main drivers of fraud. Some contracts in the food industry are long term and suddenly suppliers have to try and find ways to reduce their cost base to stay in business. In some cases, contract prices will be voluntarily adjusted due to the economic situation, but this is less common (at least to the best of my knowledge).

Against financial pressures, businesses may try and take short cuts; use practices they would not normally; and then see this as an opportunity to cut costs, deciding it’s the right thing to do to protect their business. We call this the ‘fraud pyramid’ phenomenon. 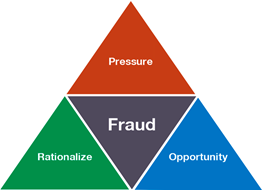 However, it’s not just further down the supply chain where fault lies – far from it. All companies that sell food to the consumer are equally aware of the supply chain pressures. Due to their own commercial pressures, they will want to keep the increase in costs of their products to consumers as low as possible. As such, they are also victims of the fraud pyramid. This can manifest itself in the quality of specifications for sourced ingredients and commodities. It’s important to note here, that this is not fraudulent behaviour unless the claims on the labels don’t ring true. Saying this, we do sometimes see what I describe as ‘the Nelson Behaviour’, when a blind eye is turned – buying from supply chains at prices that cannot be met in the marketplace without companies losing money or turning to some form of fraudulent practice, for example.

A lack of integrity in supply chains

Using rice as an example, alongside my own research and information gathered from extremely reliable sources, I will demonstrate what I can see going on in the market currently in this next segment.

The substitution of high value types of rice such as Basmati and Thai Jasmine with inferior types has been a long-standing problem and even caused a scandal in 2008 in the UK. Since then, fraudulent activity in rice has largely dissipated – but, as of late, we are seeing it creep back in.

Hands up, who would like to read the headline that toxic rice is on sale in the UK?

Much more to my surprise (and horror), I was recently contacted by a food company in the UK, who informed me that they’d found that around 10 percent of the rice they’d purchased from a European outlet contained plastic rice – about 10 percent of its weight.

We’ve been hearing of plastic rice incidences across the globe and it appears as though this has now reached the UK. I did try and investigate this further but the company who contacted me got cold feet when they understood the consequences of what they had purchased. They returned the ‘faulty batch’ to their supplier.

My team and I have also obtained a number of samples from the retail sector which have been found to contain residues of an illegal pesticide known as Carbendazim. To me, this is evidence that some rice is not being sourced from the normal supply chains where high levels of inspections and testing occur. Some may not think of this as a fraud issue, but in my book, it is a major warning sign in terms of a lack of integrity in supply chains.

We have also been finding some evidence of very high levels of broken rice – up to and beyond 15 percent. My understanding is that the industry norm is around four to five percent (as was the case in most samples we looked at). The market price for broken rice is a fraction of whole rice, so this is clearly a way to cut costs. It might be that much greater amounts of broken were requested by the purchaser to help reduce the impacts of supply chain price, for example. Alternatively, it could be that it had been introduced by the seller to keep costs lower than that of competitors. In my mind, there are major integrity issues linked to both of these possibilities.

I have also been told that rice previously sourced from India is now being imported from other countries where prices are lower. Of course, this could just be down to global sourcing in a global market. I am very aware of the fact that India has an excellent control programme for food safety risks and, in particular, aflatoxins, whereas other countries do not. So hands up, who would like to read the headline that toxic rice is on sale in the UK?

I believe all these rice examples fall within the fraud pyramid definition and I have no doubt many other ingredients and commodities could be equally at risk. Companies need to thoroughly examine what is being bought and sold in their supply chain. A lack of awareness around fraud is not a defence that consumers accepts anymore, and culpability – at least in the eyes of the public – will reside with where an organisation purchased sub-standard or unsafe products from.