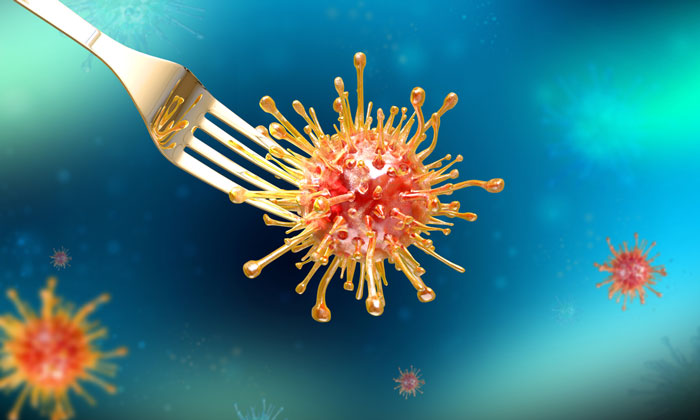 TIME SAVING: The current testing process involves gathering a physical sample and then shipping it to a lab and waiting several days

Purdue University scientists worked on the technology, which involves both hardware – a smartphone cradle – and software in the form of an application that is downloaded on the phone. The combination allows the smartphone to be used as an on-site luminometer, an instrument used to measure light.

The lettuce or other produce is rinsed with an enrichment liquid containing a modified phage, a virus for bacteria. The phage then infects harmful foodborne bacteria so that when a substrate is added, they emit light, which is detected by the smartphone’s camera through the downloaded app and a green dot appears on the screen.

According to the researchers, the cradle on the phone maximises the photon collection by using diffusive reflection material to help capture a maximum amount of light, which may not be visible by the naked eye.

“This technology could be used on a farm or in a food processing factory to provide on-the-spot detection,” said Euiwon Bae, a Senior Research Scientist in the Purdue School of Mechanical Engineering, who developed the technology along with Bruce Applegate, a Professor in the Purdue Department of Food Science. “This rapid detection is critical for getting safe produce to consumers.”

The smartphone technology, coupled with the phage, helps reduce the typical amount of time it takes to test food samples for possible foodborne illnesses. The current process involves gathering a physical sample and then shipping it to a lab and waiting several days for the results.

The Food and Drug Administration estimates there are about 48 million cases of foodborne illness annually in the U.S. — the equivalent of sickening one in six Americans each year. These illnesses result in an estimated 128,000 hospitalisations and 3,000 deaths annually. Foodborne illnesses have been in the spotlight recently because of the deadly E. coli O157:H7 outbreak tied to romaine lettuce.

The special phage used with the smartphone technology was developed by Applegate and is being commercialised by Phicrobe, a Purdue University-affiliated startup founded by Applegate. The phage technology can be used to detect not only E. coli O157:H7, a harmful and potentially deadly strain, but also other foodborne pathogens that cause Listeria and Salmonella infection outbreaks. The phage technology also has applications for detecting contaminants in water.

“It’s sort of like reprogramming a computer,” Applegate said. “We take the technology and manipulate it to detect various harmful pathogens that are present.”

The U.S. Department of Agriculture provided some funding for the technology research. A patent application has been filed by the Purdue Office of Technology Commercialization, and the technology is available for licensing.