The cost of importing food is expected to soar by 6 per cent this year, reaching the second highest since records began. 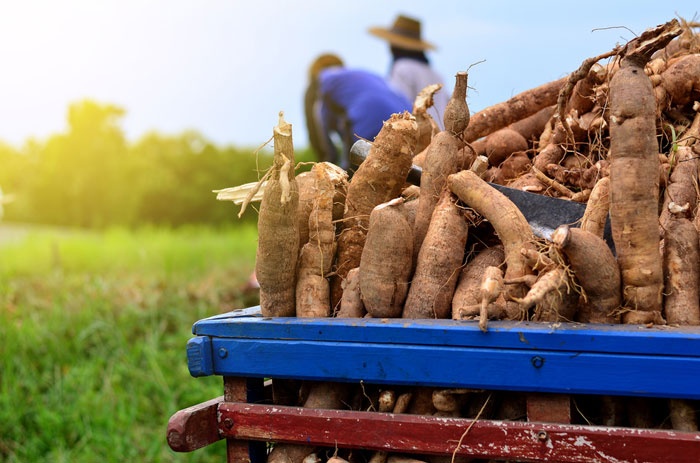 SHOOTING ROOT: Cassava is one of the big movers - good news for African farms where the bulk of the world's supply is grown.

The UN’s Food and Agricultural Organization (FAO) released its Food Outlook today (November 9) predicting food exports will reach US$1.413 trillion by the end of the year.

The report highlights eight areas ranging from wheat to fisheries and breaks down the movements within those sectors.

The higher import bill over most of the sectors is driven, according to the FAO, by increased international demand for most foodstuffs as well as higher freight rates.

Of particular concern to the organisation is the economic and social implications of the double-digit increases in the food import bills for Least-Developed Countries (LDCs) and Low-Income Food-Deficit Countries (LIFDCS).

“Higher bills do not necessarily translate into more food being bought by them as the cost of importing has greatly escalated” said FAO economist Adam Prakash.

The higher import costs come at a time when inventories are robust, harvest forecasts are strong and food commodity markets remain well supplied.

While production trends are broadly strong across the board, average prices in international transactions can mask more specific trends.

For example, while international wheat prices have been flat, U.S. hard red spring wheat, a popular high-quality variety with enough protein content to make noodles and pasta, was 40 per cent higher in July 2017 than a year ago. Aromatic rice varieties have risen eight times faster than the FAO All Rice Index, which is up 4 per cent on the year. Likewise, the FAO Butter Price Index has risen 41 per cent so far in 2017, more than three times as much as the Dairy Price Index of which it is a component.

The livestock and dairy sectors are particularly dynamic. The meat import bill is set to reach an all-time high of USD 176 billion this year, up 22 per cent from 2016. World milk production is predicted to grow by 1.4 per cent, led by a robust 4 per cent expansion in India, even as more stringent environmental regulations and quality controls in China may lead to a contraction there.

World output of oilseeds oils – vegetable oils and animal fats are the largest items in the LIFDC import bills – is expected to increase slightly this year after last year’s strong season. But global soybean production, despite a planting boom in the Northern Hemisphere, is set to decline as yields return to normal levels after last year’s nearly optimal weather.

Tropical fruits are increasingly stars in global trade, with export volumes of mango, pineapple, avocado and papayas on course to achieve a total combined value of USD 10 billion this year.

According to the FAO, their popularity is promising for poverty relief and rural development as almost all production takes place in developing countries, usually through smallholder farmers with fewer than five hectares.

FAO estimates that total production of the four fruits could reach 92 million tonnes this year, compared to 69 million tonnes in 2008. Currently 95 per cent of that output is consumed locally, but rising incomes and changing consumer preferences will likely boost export volumes, especially if freer trade and better market access stimulates further technological gains in distribution.

Major producers of tropical fruits include India, home to around 40 per cent of global mango production, Costa Rica, which supplies a large share of the world’s pineapples, China and Brazil – and also Mexico, which is the largest exporter.

As well as providing detailed analyses of the production, trade and demand for major cereal and oilcrops, the Food Outlook updates trends for cassava, which has been one of the fastest-expanding staple crops at the global level and is the third most important source of calories in the tropics, after rice and maize.

Production in sub-Saharan Africa may reach a record high this year of 156 million tonnes, buoyed by various commercial expansion programmes aimed at curbing reliance on food imports in the region.

Still, global production of this root will likely contract slightly in 2017 – to 278 million tonnes – after two decades of uninterrupted growth, due to a combination of drought conditions, depressed prices and policy changes, FAO said.