Could leftover grain from brewing become an alternative protein source?

Scientists in the US think they may have found a use for the leftover grain produced as a result of brewing beer, which involves both shrimp farms and a newly discovered bacteria from Yellowstone. 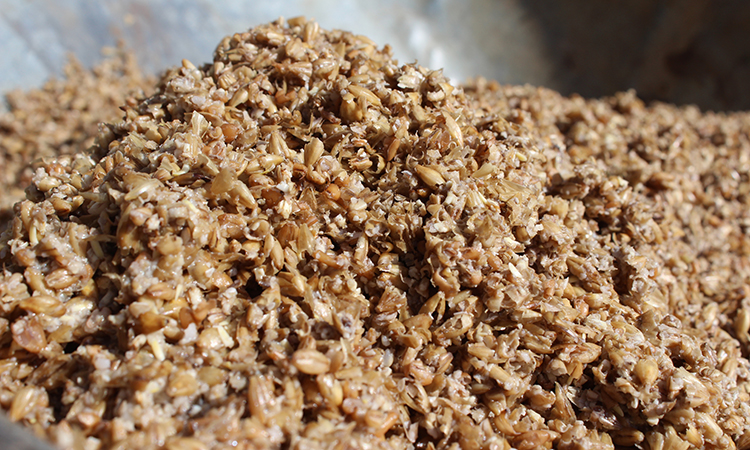 Spent or "wet" malt grains are a by product of brewing

Home brewing enthusiasts and major manufacturers alike experience the same result of the beer-making process: mounds of leftover grain. Once all the flavour has been extracted from barley and other grains, what’s left is a protein- and fibre-rich powder that is typically used in cattle feed or put in landfills. A group of scientists however has reported a new way to extract the protein and fibre from brewer’s spent grain and use it to create new types of protein sources, biofuels and more.

“There is a critical need in the brewing industry to reduce waste,” said Haibo Huang, PhD the project’s principal investigator. His team partnered with local breweries to find a way to transform leftover grain into value-added products.

“Spent grain has a very high percentage of protein compared to other agricultural waste, so our goal was to find a novel way to extract and use it,” said Yanhong He, a graduate student who is presenting the work at the spring meeting of the American Chemical Society. Both Huang and He are at Virginia Polytechnic and State University (Virginia Tech).

Craft brewing has become more popular than ever around the world, and this increased demand has led to an increase in production, something the scientists say is generating a major uptick in waste material from breweries, 85 percent of which is spent grain. This byproduct comprises up to 30 percent protein and up to 70 percent fibre, and while cows and other animals may be able to digest spent grain, it is difficult for humans to digest it because of its high fibre content.

In order to transform this waste into something more functional, Huang and He developed a wet milling fractionation process to separate the protein from the fibre. Compared to other techniques, the new process is more efficient because the researchers do not have to dry the grain first. They tested three commercially available enzymes (alcalase, neutrase and pepsin) in this process and found that alcalase treatment provided the best separation without losing large amounts of either component. After a sieving step, the result was a protein concentrate and a fibre-rich product.

Up to 83 percent of the protein in the spent grain was recaptured in the protein concentrate. Initially, the researchers proposed using the extracted protein as a cheaper, more sustainable replacement for fishmeal to feed farmed shrimp. But more recently, Huang and He have started to explore using the protein as an ingredient in food products, catering to the consumer demand for alternate protein sources.

However, that still left the remaining fibre-rich product without a specific use. Last year, Huang’s postdoctoral researcher Joshua O’Hair, PHD, reported finding a new species of Bacillus lichenformis in a spring at Yellowstone National Park. In the paper, they noted that the bacteria could convert various sugars to 2,3-butanediol, a compound that is used to make many products, such as synthetic rubber, plasticisers and 2-butanol, a fuel. He pre-treated the extracted fibre with sulfuric acid, then broke it down into sugars from cellulose and hemicellulose. He then fed the sugars to the microbe, producing 2,3-butanediol.

Next, the team plans to work on scaling up the process of separating the protein and fibre components in order to keep up with the volume of spent grain generated at breweries. They are also working with colleagues to determine the economic feasibility of the separation process, as the enzymes currently used to separate the protein and fibre components are expensive. Huang and He say they hope to find suitable enzymes and green chemicals to make this process even more sustainable, scalable and affordable.