Behind bars: reflecting on chocolate production and what the future might hold

Carol Oldbury of Hames Chocolates discusses how the brand develops flavour within its chocolate, and talks through the sustainability policies it has implemented to protect farmers and growers. 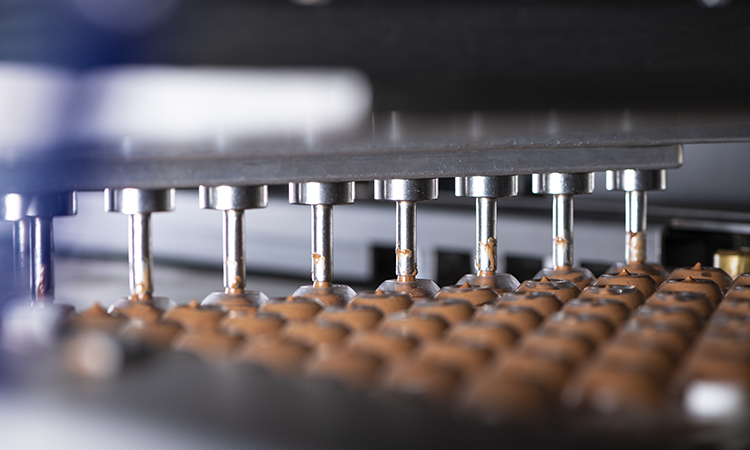 Chocolate is such a ubiquitous product, it’s easy to overlook the hard work and creative flair that goes into producing one of the world’s favourite sweet treats. New Food interviewed Carol Oldbury, Managing Director of Hames Chocolates, to discuss the latest trends in this indulgent market and learn about its challenges over the past year.

Hames Chocolates is the “biggest smallest manufacturer” according to Oldbury; despite not being a household name, plenty of Brits will have unknowingly eaten Hames Chocolates at some point. Hames’ business model is built around providing chocolate for other well-known brands to package in their own branding. In fact, Oldbury revealed that 95 percent of the firm’s chocolate is sold under private labels to more familiar brands and retailers.

Chocolate journey from tanker to wrapper

This operation is by no means as simple as shipping off bars of chocolate to be wrapped by somebody else, though. “Every brief is different,” Oldbury explained. “Sometimes that might be an advent calendar with chocolate brussels sprouts, or it might be shavings for a chocolate cake.

“In an ideal world, we’d like the customer to specify the amount, flavour profile and grade of chocolate, as well as the audience for the product.”

In terms of the actual chocolate itself, Oldbury explained that the majority of their cocoa comes from West Africa. “It arrives to us in large tankers; it is then tempered and moulded into whatever format we desire.

“The cocoa pods are picked, dried and roasted. Then they are conched – a process that essentially squashes the beans – we have another business conch on our behalf, just like the majority of chocolate makers. The beans then go through a machine that grinds them, before the sugar, milk and emulsifiers are added.” 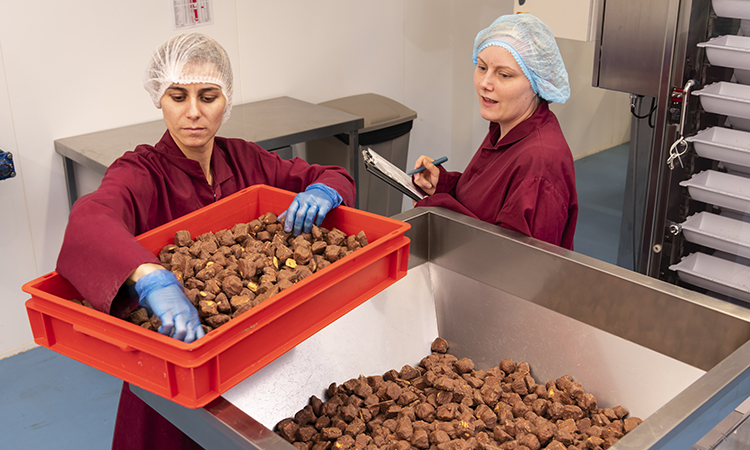 Hames Chocolate is used in many applications and branded products

The science behind chocolate flavour and new trends

Oldbury explained that the process of creating flavoured chocolate is a complex one, with certain flavours lending themselves to chocolate more readily than others – for example, caramel and orange. Both the intensity and length of time that flavour lingers in your mouth are also crucial considerations and a big challenge.

“Take an orange truffle, it should have a sweet flavour but no lingering quality. Similarly, the effects of a chilli-infused chocolate shouldn’t last too long – you don’t want to be tasting that for the next hour! Whereas, a strong flavour like mint should stick around.

“It’s my job to run the business forwards,” she continued. “We have a tasting panel that marks each product based on mouth feel, taste linger, and aesthetics. If there are any doubts regarding a product, then it comes back to me for the final say.”

She added playfully: “It’s not a great hardship – we were making chocolate animals yesterday, there were five on my desk and now there are none!”

As with any food product, there are always developments and trends to be aware of. Interestingly, it’s perhaps a political situation that may be a driver for one particular current chocolate trend. “British chocolate is going to be a big thing, especially with Brexit,” explained Oldbury. “There has never been a better time to shout about Britishness!

“British chocolate used to have a poor reputation, but like everything else, it has evolved. I think people want to know the provenance of food and celebrate that; in my opinion, British chocolate is equally as good as Belgian or French chocolate.

“Dark chocolate has also become very popular, with all the health benefits which are now associated with it – and this will only continue to grow. Aside from that, we have seen a big upswing in vegan products. We are currently working on a vegan ‘milk’ chocolate – recently, we’ve all been drinking a chocolate oat drink in the office.”

Chocolate as a sector is one that has been marred by accusations of unsustainable and unethical practices. Just last month, New Food’s editor Bethan Grylls spoke to Tony’s Chocolonely to discuss modern slavery within the industry. Sustainability and ethical practice is close to the heart of Hames Chocolates, according to Oldbury.

“As I said, many of our cocoa beans originate from West Africa. Since October, farmers who source cocoa beans in this area have been paid a living wage. This translates to around an extra $400 per tonne, which goes directly to the farmers.

“We also work with Cocoa Horizons and the Rainforest Alliance to trade fairly with farmers and ensure we’re looking after the environment.”

Sustainability is rightly permeating the entire food industry at present, and the chocolate sector is no different. “Our chocolate is sustainable; that’s a given,” explained Oldbury, “but now we need to look at our packaging.

“We currently use compostable lolly sticks and have started to introduce compostable flow wrap to ensure that we are environmentally friendly.” 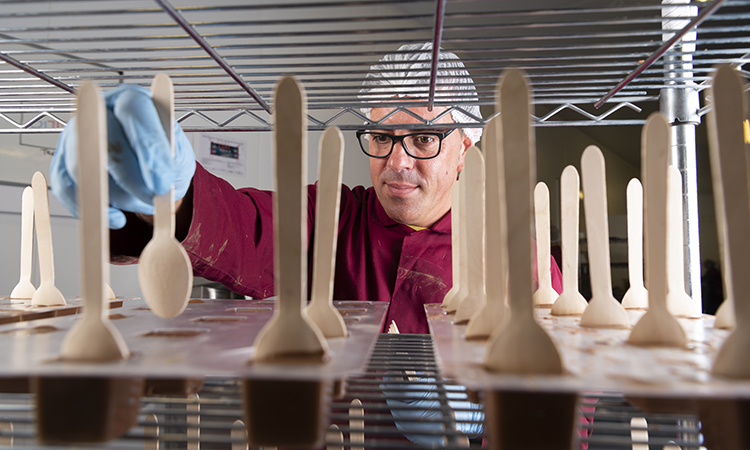 There are few sectors of the food industry, if any, that have not been impacted by COVID-19 at some point in the last ten months or so. Hames Chocolates did not escape unscathed either, as Oldbury revealed: “Ninety eight percent of our customers temporarily closed – both in the hospitality and food sectors.

“We were forced to close for the first lockdown for three weeks, but we don’t envision that we’ll have to again, as we are deemed an essential business.”

Commenting on how the company navigated these particularly tricky times, Oldbury said: “We needed to be agile; we developed a new website and took the time to future-proof the business. We put in a new energy-efficient production line, created new product offerings, and more vegan products. We are cautiously optimistic that the situation will improve from March 2021 onwards.”

But it’s not just the pandemic that has caused Oldbury headaches this year. “Brexit will also be a challenge ” she told New Food.

“Belgium is still the chocolate capital and any materials that come in may occur a tariff, which is variable depending on the contents.”

Yet there is still plenty to be positive about for the family-run business. Despite being forced to close for part of the year and dealing with ever-developing trade conditions as a result of Brexit, Hames still secured an abundance of contracts, including new vegan offerings.

“When we came back from lockdown, we had a lot of orders to fulfil! We produced a lot of vegan chocolate, which has seen a big increase this year.

“There’s more of a demand for this kind of product, so people are more willing to spend time creating it. With that, better vegan chocolate will come.”

Carol Oldbury is the Managing Director of Hames Chocolates. She is also a shareholder in other confectionery companies and has over 25 years’ experience in the chocolate and confectionery industry.