Honey and wild salmon used to trace lead in the environment

Scientists have been able to trace sources of lead (and other metals) by analysing the presence of lead isotopes in honey and Pacific salmon. 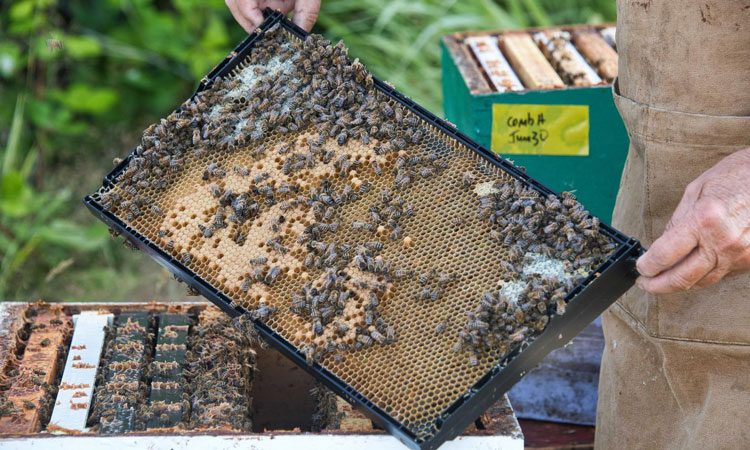 Scientists have combined analyses from honey and salmon to show how lead from natural and industrial sources gets distributed throughout the environment.

By analysing the presence of lead isotopes in honey and Pacific salmon, Vancouver-based scientists have been able to trace the sources of lead (and other metals) throughout the region. 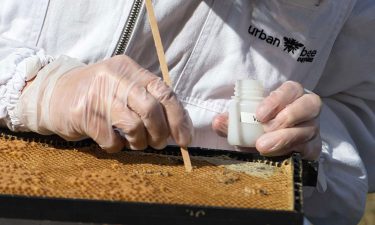 “We’ve found that we can let the bees do the hard the work for us…” Researcher, Kate Smith, sampling honey (credit: Dominique Weis).

“We’ve found that we can let the bees do the hard the work for us: they go to thousands of sites where metal-containing dust particulates might land, then bring samples back to a central hive. From there we can take the honey to have it analysed and begin to identify the source of pollutants like lead,” said PhD candidate Kate Smith, part of a team working at the Pacific Centre for Isotopic and Geochemical Research, University of British Columbia.

Once they have sampled the honey gathered by the bees, it is taken to a specialised geochemistry lab to be analysed. This allows scientists to distinguish between different types (isotopes) of certain metal pollutants, like lead.

“Looking at the lead isotopic composition of the honey samples, we can tell the difference between honey gathered in the city centre of Vancouver and honey gathered in rural areas,” Smith continued. “We see that the trace amounts of lead in urban honey samples contain higher 208Pb/206Pb ratios that have no local natural equivalent, indicating that they come from man-made sources like aging city infrastructure and fuel combustion (e.g. cars and ships).

“Lead ratios measured in rural honey, on the other hand, reflect those of natural sources, like the local geology or particulates from nearby forest fires.”

“This work with honeybees is mirrored in initial findings from shellfish and salmon, ” added Dr Miling Li, postdoctoral researcher. “Juvenile salmon breed and live in remote freshwater ecosystems in British Columbia, and their lead composition reflects that found in nature, e.g. the nearby Garibaldi volcano range. Adult salmon that forage in the open ocean off the BC coast reveal isotopic compositions consistent with downtown Vancouver honeys.

This indicates that Pacific salmons were exposed to lead during their sea life mostly from anthropogenic sources in the Northeast Pacific Ocean.”

Although the sources of lead can be identified, the lead concentrations in both the honey and salmon from Vancouver and the surrounding areas are low and well below the reported world-wide average of lead in honey.

The UBC team has now developed standardised protocols for measuring lead isotopes in honey to apply the technique to other cities.