Study finds white striping disease in 85 percent of standard factory-farmed chicken on the shelves of the top UK supermarkets. 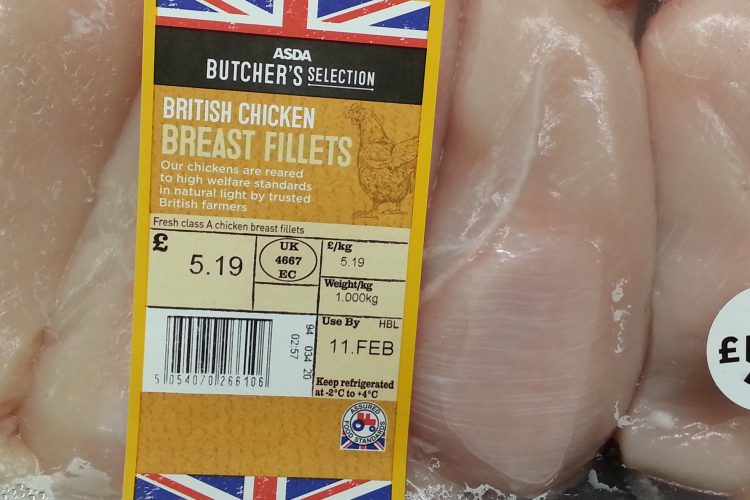 An investigation has revealed “shocking levels” of chicken with white striping disease being sold throughout the UK.

White striping is a muscle disease caused by rapid growth and development and appears as thin white lines that run across the poultry, mostly impacting the breast area.

In its study, animal protection charity, The Humane League UK, discovered that more than eight in 10 samples of ‘standard’ chicken packets showed the disease. In comparison, 11 percent of the samples of higher welfare chicken showed signs of white striping – including free-range and organic – of which “the majority was very low grade”.

“It is now more urgent than ever for supermarkets to move away from fast-growing breeds of chicken, which are not only the source of so many health and welfare issues for chickens, but also result in a much lower quality end product,” urged Vicky Bond, Managing Director at The Humane League UK.

The problem with white striping

The disease reduces the nutritional value of the product as it increases the fat content; some studies have shown this can rise by as much as 224 percent. Findings have also found that the disease can lower protein content up to nine percent and increase collagen by 10 percent. White striping can also have an effect on the texture and make it difficult for marinade to bind.

The Humane League UK carried out the investigation by photographing and examining ‘standard’ factory-farmed ranges of supermarket own-brand chicken which are the most commonly available choice on their shelves. These were rated against a recognised scientific scale from ‘zero – none present’ up to ‘three – severe white striping present’. According to the findings, the disease was present in 94 percent of Asda samples, 92 percent of Aldi samples, and 92 percent of Lidl samples.

The Humane League UK is calling on UK retailers to eradicate fast-growing breeds of chicken from their supply chains by adopting the Better Chicken Commitment (BCC), which bans this form of breeding. Marks & Spencer became the first UK retailer to commit to the BCC in 2017, followed by Waitrose in 2019.

Tesco, Aldi, Lidl, Asda and Morrisons are yet to commit, according to The Humane League. Yet in France, many of all major supermarkets, including Aldi, have committed to making the improvement.