The commitment is said to sit alongside Aldi’s existing policies to only sell British products across multiple categories, with 100 percent of its core fresh meat, milk and egg range all coming from British farmers. 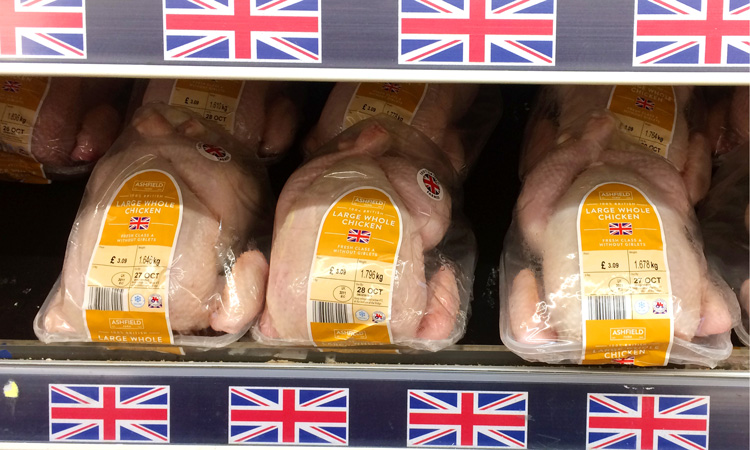 Aldi UK’s CEO, Giles Hurley, has vowed that the supermarket will only ever sell fresh chicken and beef from British farmers and will never sell chlorinated chicken or hormone treated beef, regardless of any future trade deals.

The UK’s fifth largest supermarket’s chicken and beef range is already 100 percent British and the company has confirmed that this will never change, regardless of the associated potential cost benefits from trade deals.

“Aldi is one of the biggest supporters of British suppliers and we want to make it clear that will always be the case,” Hurley said. “We are a signatory to the NFU Back British Farming Charter and our entire core range of fresh meat and milk is from Red Tractor-approved farms in the UK. We will never compromise on the standards or specifications of our products, and that includes a commitment to never selling chlorinated chicken or hormone injected beef.

“Britain has some of the highest food quality standards in the world, and our commitment to only source chicken and beef from this country means our customers know they are always buying high quality Aldi products at unbeatable value.”

Charity campaign group The Soil Association published a list in 2018 of 10 key food safety ‘risks’ it believes could arise if Britain confirms a trade deal with the US, with chlorinated chicken listed as number one.

The organisation said that this is where the US poultry industry “uses acid washes to eliminate bacteria at the end of the meat production chain rather than preventing infection in chickens across all stages of rearing and slaughter. Essentially, chemical washes hope to make up for inadequate hygiene on farms and abattoirs.”

Hormone-treated beef and genetically modified crops were also both on the list.

Honor Eldridge, Policy Officer at the Soil Association, said: “British farming has a reputation for high food safety and high animal welfare. It is imperative that any future trade deal does not result in a dilution of these standards for consumers. Nor should any deal competitively disadvantage UK farmers.”