With the global population on course to be 9.9 billion by 2050 and the ever-more intense race to reach Net Zero, our methods of food production need a drastic rethink. Will technology be our saviour? 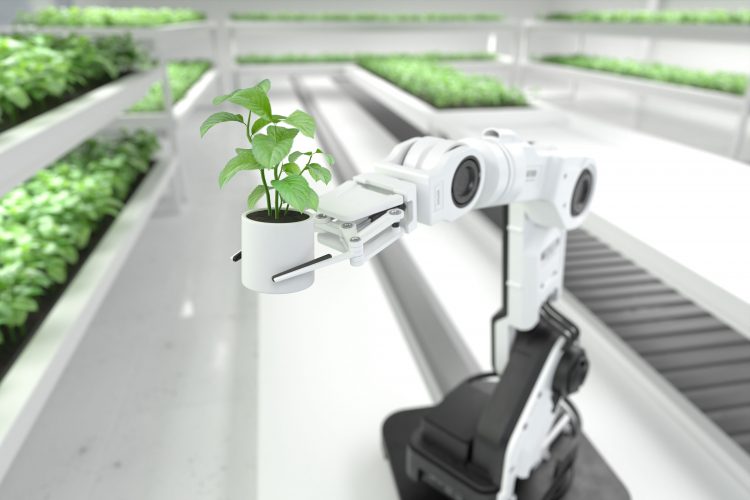 Old Macdonald had a farm E.I.E.I.O, and on his farm he had an autonomous tractor which maps the entire field and collects data…Not as catchy as the original, I’ll admit, but certainly a more accurate depiction of what the future farm may look like.

As the population grows and we struggle with harsher climates and pesticide-resistant plants, growers have had to take a step back to jump several forward. Artificial intelligence (AI), automation, gene editing (GE) and indoor farming – concepts that were once the tales of science fiction – now hold the future of our food system in their hands.

Fifty percent of global topsoil has been lost by intensive farming.1 Why does this matter? Because 95 percent of food is grown within this uppermost layer as it contains all the goodness plants need to survive. We’ve also seen an 84 percent rise in herbicide-resistant weeds and a 150 percent increase in costs over the last two decades.1 It’s a fair summation then, that traditional farming just isn’t working.

Fortunately, as destructive as we humans are, we’re also pretty good at finding solutions. Smart Robot Company in the UK, for example, has created an intelligent tractor (known as Tom) which is capable of mapping and monitoring crop fields independently. Unlike a conventional tractor, Tom is lightweight and designed to have minimal impact on the soil. The company has also developed an AI engine in which data from the farm is gathered via Tom and converted into ‘per plant intelligence’ – ie, information that can be used to make informed decisions about what each crop needs.

We’re also seeing waves in the GE arena. Despite not yet being widely accepted by consumers, GE crops will likely play a vital role in the future, as they offer significant benefits in terms of lowering our environmental impact, while increasing yield and making crops more resistant to harsh weather and disease. Crops could also be edited to reduce allergens and exhibit more nutritious attributes.

It would be naïve, however, to think there won’t be unintended consequences – there always are – and there are those who have raised concerns that such genetic manipulation could bring about accidental mutations, such as new toxins or allergens.2

Around the globe, the stance on GE is varied. In a post-Brexit world, the UK is steering a different direction to the EU, with GE getting the green light so long as the food doesn’t pose a health risk, deliberately mislead consumers, or lower nutritional profiles. In Japan, GE is moderately regulated without safety evaluations so long as the techniques meet certain criteria.3,4

But it’s regions such as Africa and India where GE could offer the greatest enhancement of food security. It has already demonstrated its worth in this respect; consider IR8, the first ‘miracle rice’, and the ways in which GE has helped farmers adapt to rising sea levels through crops that can survive long periods underwater.5 But will costs be too prohibitive?

Lastly, I must flag the prospects of vertical farming (find out more in Issue 6 2021 of New Food). The indoor farming technology market was valued at $23.75 billion in 2016 and it’s predicted to be worth $40.25 billion by next year.6 With plants grown indoors, GE needn’t even be a consideration; the perfect environment can be created and the use of pesticides eliminated, as is the case with US-based Square Roots. It also offers the benefits of significant reductions in water usage and farmland, condensing hundreds of acres to the size of a shipping container.

Technology and innovative thinking arguably hold the key to our future success/survival. It will be interesting to see how our food systems evolve in the coming years, but one thing is for certain: change is sorely needed.

How to minimise organic contamination and product loss

By Sievers Analytical Instruments by SUEZ