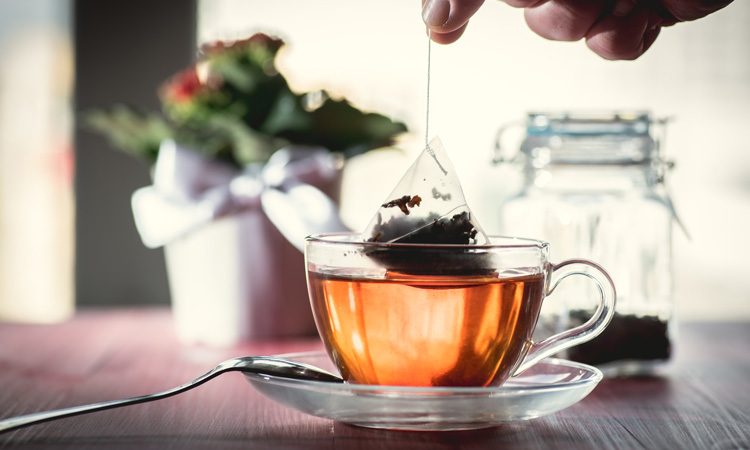 Canadian researchers have found that some plastic tea bags shed high levels of microplastics, defined as small (less than 5mm in length) pieces of any kind of plastic debris, into water. Microplastics have widely been found in the environment, in tap and bottled waters, and in some foods.

The World Health Organization (WHO) point out that such particles in drinking water do not appear to pose a risk. However, the WHO said that the findings were based on “limited information” and it called for greater research on the issue.

The researchers of the study, from McGill University in Montreal, Canada, also called for more investigation into the health effects of microplastics.

Most teabags are made from paper, with small amounts of plastic used to seal them shut. But some premium brands have switched to using greater amounts of plastic mesh for their product. This is so that the tea bag is held in a pyramid shape, which producers claim helps the tea leaves infuse better.

Four different commercial teas packaged in plastic teabags were used in the study. The researchers removed the tea and placed the empty teabags in water heated to 95°C, as if they were brewing tea. They found that a single plastic teabag released about 11.6 billion microplastic and 3.1bn smaller nanoplastic particles into the hot water, which are completely invisible to the naked eye.

The level of “particles released from the teabag packaging are several orders of magnitude higher than plastic loads previously reported in other foods”, according to the study.

Researcher Laura Hernandez outlined that they were surprised by the amount released compared to those recorded in other studies into things like bottled water. She said the discrepancy could be, in part, due to the fact they focused on the tiniest of particles – both microplastics, which are about the thickness of one hair, and nanoplastics, which are a further thousand times smaller. She also said it could be due to the fact “it is a piece of plastic being exposed to boiling water” and not just water at room temperature.

She encouraged consumers to choose loose teas that are sold without packaging or other teas that come in paper teabags, arguing that there is “no need to package tea in plastic”, which she pointed out become single-use plastic, contributing to not only the possible ingestion of plastic but the environmental burden of plastic pollution.