Only two weeks remain for farmers and food sector workers to have their say in a Government consultation on the future of British farming. 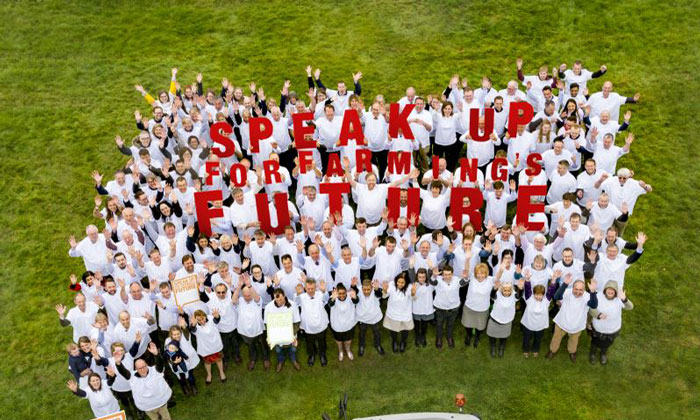 OR FOREVER HOLD YOUR PEACE: Defra described the consultation as a "once-in-a-generation" opportunity

More than 150 farmers and members of the public have taken part in a photo-call organised by the NFU urging people to show their support for British farming and food production by responding to the Government’s consultation on the future of farming.

The NFU has been working to get people to answer the Government’s call through its Speak Up For Farming’s Future campaign.

The Health and Harmony proposal, put forward by the Department for the Environment, Food and Rural Affairs earlier this year, outlines how the department would change land use once the United Kingdom has left the European Union.

Perhaps the most significant clause in the proposal is to have money redirected from direct payments under the Common Agriculture Policy (CAP), which are based on the amount of land farmed, to a new system of paying farmers “public money for public goods” – principally their work to enhance the environment and invest in sustainable food production.

The consultation closes on May 8.

NFU President Minette Batters said: “This is both a historic and influential time for the farming sector with the current consultation looking to develop our future farming policy. This is the time for the voice of farming to be heard loud and clear. It is also fantastic to see such a positive response from people out in force on social media and online saying why they think British food and farming is so important to the nation, both now and post-Brexit.

“The Government’s Health and Harmony consultation gives every single person in this country the chance to make clear the importance of British food and farming to the nation.

“This is a vital moment in time where we must emphasise the need for a profitable, progressive and productive industry – one that keeps farming businesses viable for generations to come – with food production at the heart of everything we do. The continued availability of high quality, safe and traceable food, affordable for everyone, is key to a successful Brexit.

“The NFU has listened to the views of its membership in over 30 meetings across the country and is now starting to form its response. But there’s still time for farmers to ensure their voices are heard by government ahead of the 8 May deadline.

“We are also galvanising our public supporters to have their say with a targeted digital campaign on our website for NFU Countryside members.

“I urge everyone to join the debate and speak up for farming’s future. Those messages plus strong support from the public will mean a united and positive voice that government cannot ignore.”