Using a miniature oxygen measuring probe – the first time this has been done in grapes – scientists compared oxygen profiles across the flesh inside grapes of Chardonnay, Shiraz and Ruby Seedless table grape in a study that could have a significant impact on the wine industry. 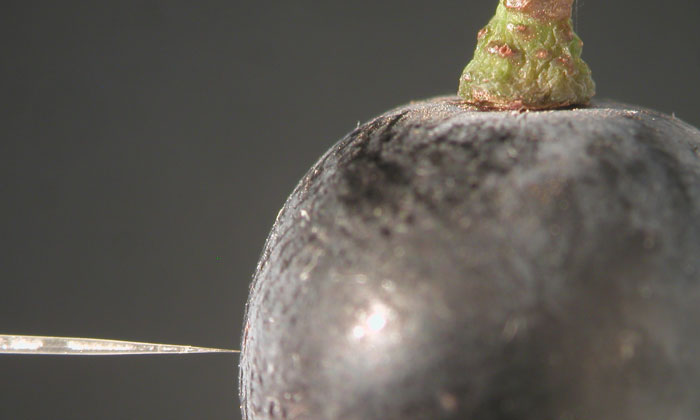 University of Adelaide researchers have discovered how grapes “breathe”, and that shortage of oxygen leads to cell death in the grape.

The discovery raises many questions about the potentially significant impacts on grape and wine quality as well as flavour and vine management, and may lead to new ways of selecting varieties for warming climates.

“In 2008 we discovered the phenomenon of cell death in grapes, which can be implicated where there are problems with ripening. We’ve since been trying to establish what causes cell death,” said Professor Steve Tyerman, Chair of Viticulture at the University of Adelaide’s Waite campus.

“Although there were hints that oxygen was involved, until now we’ve not known of the role of oxygen and how it enters the berry.”

Published in the Journal of Experimental Botany, the researchers describe how grape berries suffer internal oxygen shortage during ripening.  With the use of a miniature oxygen measuring probe – the first time this has been done in grapes – they compared oxygen profiles across the flesh inside grapes of Chardonnay, Shiraz and Ruby Seedless table grape.

They found that the level of oxygen shortage closely correlated with cell death within the grapes. Respiration measurements indicated that this would be made worse by high temperatures during ripening – expected to happen more frequently with global warming.

“Shiraz has a much smaller area of these oxygen pores on the berry stem which probably accounts for its greater sensitivity to temperature and higher degree of cell death within the berry.”

Professor Vladimir Jiranek, Director of the University of Adelaide’s ARC Training Centre for Innovative Wine Production, added: “This breakthrough on how grapes breathe will provide the basis for further research into berry quality and cultivar selection for adapting viticulture to a warming climate.”

The study was supported by the Australian Government’s Industrial Transformation Research Program with support from Wine Australia and industry partners.