Scientists have developed magnetic nanoparticles that can detect traces of a popular pesticide chemical in under two hours without the need for costly preparation procedures. 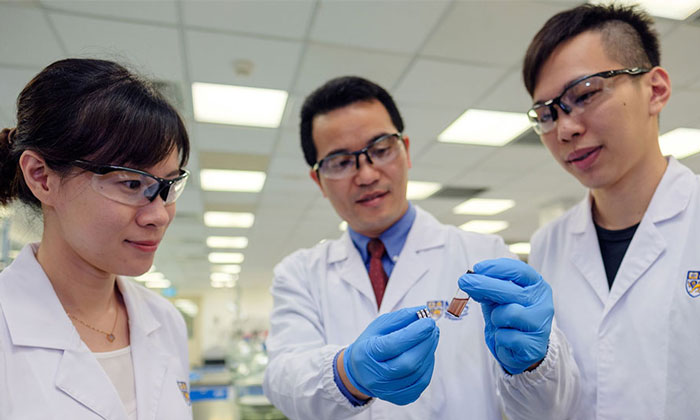 QUICKER APPROACH: The research team led by Assistant Professor Yang Hongshun from the NUS Food Science and Technology Programme were behind the development of novel magnetic nanoparticles that could speed up the screening of pesticide residue in vegetables

The technique, produced by researchers at the National University of Singapore, detects minute traces of pyrethroids, which are a constituent of most household and industrial pesticides, in under two hours.

The nanoparticles are first added into a liquid sample obtained from vegetables, serving as “micro magnets” to attract pyrethroid molecules. Pyrethroids bound on the nanoparticles are then washed off by a small amount of organic solvent and collected for analysis.

It is able to detect pyrethroids at a concentration level of as low as 0.02 nanogram per gram of vegetables. The nanoparticles can also be reused up to 30 times, making this screening approach both time and cost efficient.

Assistant Professor Yang Hognshun from the Food Science Technology Programme at the NUS Faculty of Science, developed the technology with his PhD student Yu Xi.

He said: “Existing screening methods require long processing time and hence it could be challenging to apply such methods to detect pesticide residue in a large batch of samples, which is vital to ensuring food safety. Our method therefore offers a faster and more effective alternative.”

“With small modifications to the extraction process, this method can be used to detect pyrethroids in other food products such as nuts, fruits and vegetable oils. Modifications can also be made to the coating of the nanoparticles to detect other types of pesticides and chemicals including mycotoxins and antibiotics,” added Miss Yu.

Synthetic pesticides such as pyrethorids are widely used in vegetable farming to control agricultural pests. While the use of these pesticides improves crop yield, long-term ingestion of excessive pesticide residues through the consumption of fruits and vegetables that have been subject to pesticide abuse could lead to adverse health effects.

Several methods have since been established to screen vegetable crops for pyrethorid residue. However, they require time consuming and costly procedures such as column filtration and centrifugation, and can take up to six hours to process and analyse a sample.

What is the most wasted takeaway food in the UK?