The Food Safety Authority of Ireland (FSAI) has revealed its 2017 figures, showing a 42 per cent increase in complaints relating to non-display of allergen information. 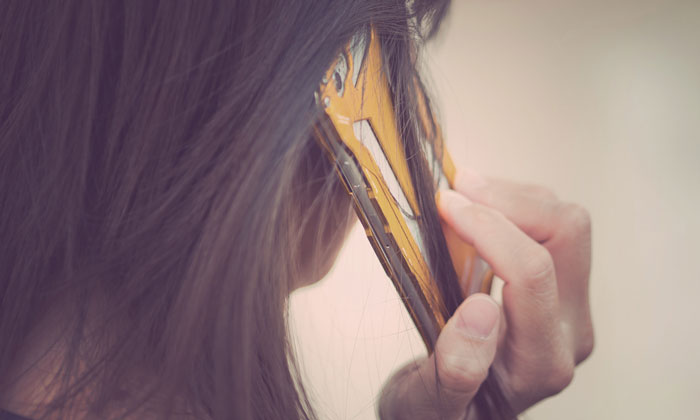 The Food Safety Authority of Ireland (FSAI) received more than 3,400 complaints last year, with over a third related to unfit food.

The FSAI said that the majority of consumer concerns relating to allergen information included a variety of non-compliance issues such as a lack of allergen information available in restaurants; confused messages regarding the presence of particular allergens in food; lack of awareness by food businesses of the legal requirement to display allergen information; allergens not highlighted on a food label; and allergens present in a food, but not indicated or displayed.

The categories of complaints were:

Contamination of food with foreign objects was frequently reported by consumers, which included reports of food contaminated with insects and glass, as well as other foreign objects. 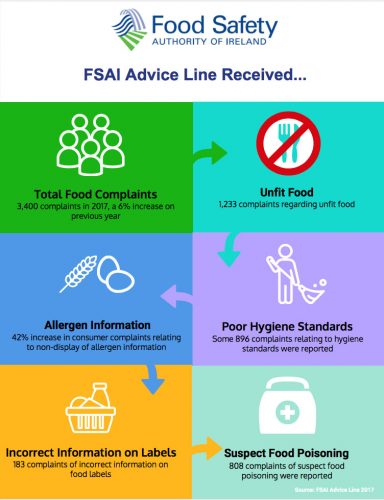 Examples of complaints received included chewing gum being reported several times as being present in a number foods including sandwich wraps; scrambled egg from a breakfast buffet; and in takeaway rice. Other foreign objects found in foods were a long black hair in a sandwich; rodent droppings in a bag of crisps; a tooth in a takeaway dish; larvae in jar of beetroot; a piece of glass in a smoothie; maggots in mashed potato; and a wasp in a packet of bacon.

Of those complaints regarding poor hygiene standards in food premises, the presence of rats, mice and flies were cited.  Others included poor personal hygiene habits of staff working in the food sector. Reports in this area cited staff wiping noses when preparing sandwiches; staff members picking up dropped food from the floor and then including the food to make a sandwich; and the smell of sewerage in food premises. All complaints received by the FSAI in 2017 were followed up and investigated by food inspectors throughout the country.

The FSAI’s Advice Line also offers advice and information and during 2017, there were 9,576 queries from people working in the food service sector – manufacturers, retailers, researchers, and consultants. The most popular queries were regarding legislation on food labelling requirements; requests for FSAI publications, as well as information for new food businesses setting up operations.

Dr Pamela Byrne, Chief Executive, FSAI sadi: “We welcome consumers and food businesses contacting us via our Advice Line.  Having people spotting and reporting inappropriate and unsafe food and practices greatly aids our work and provides us with information that we can act upon.

“The year on year increase in our Advice Line statistics reflect a continued trend where consumers are showing they have zero-tolerance when it comes to poor food safety and hygiene standards in food products and in food premises.

“In 2017, we undertook a nationwide campaign to raise awareness of the importance and legal requirement for allergen information to be displayed and communicated accurately to consumers in food service establishments. We are seeing consumers becoming more aware and having a greater understanding of what they should expect from food establishments in Ireland.”