The end of the cucumber flyers: harvesting robot under development

Changing labour costs are causing a migration of the labour-intensive cucumber farming industry out of Germany to Eastern Europe and India. Researchers in Berlin have set out to develop technology that will keep the nation’s cucumber production ‘commercially viable’. 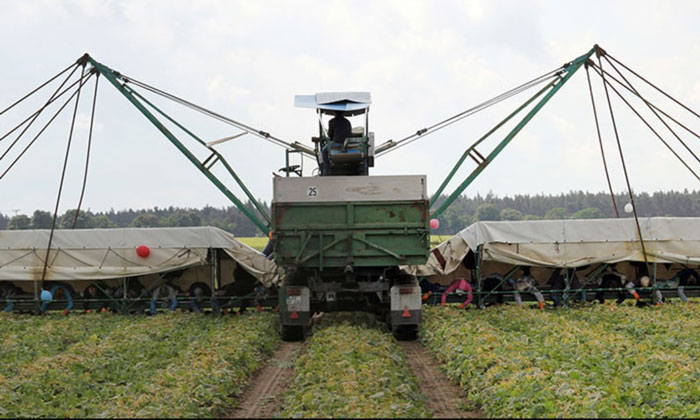 In Germany, cucumber harvesting is historically a labour intensive process. One popular method involves a cucumber flyer, a vehicle with two long wings stretching out on each side in which workers lie prone, testing and picking the vegetables by hand. But the days of the flyer may now be numbered.

As part of the EU’s CATCH project, the Fraunhofer Institute for Production Systems and Design Technology IPK is developing and testing a dual-arm robot for the automated harvesting of cucumbers – a solution its creators say has the potential to keep crop cultivation commercially viable in Germany.

Experts from Fraunhofer IPK in Berlin, along with other German and Spanish researchers, are studying the potential for automating cucumber harvests in the scope of the EU project CATCH. Project partners are the Leibniz Institute for Agricultural Engineering and Bioeconomy in Germany and the CSIC-UPM Centre for Automation and Robotics (CAR) in Spain.

CATCH researchers want to develop and test a dual-arm robot system consisting of inexpensive lightweight modules. The ultimate aim: this system could be used for automated cucumber farming and other agricultural applications.

They are using cutting-edge control methods equip the robot with tactile perception and enable it to adapt to ambient conditions. These methods also make it possible for the dual-arm robot system to imitate human movements. Researchers namely want to make sure that the robot does not damage crops – or pull them and their roots out of the soil. The automated harvester must be at least as efficient as its experienced human counterpart, who can pick as many as 13 cucumbers per minute. 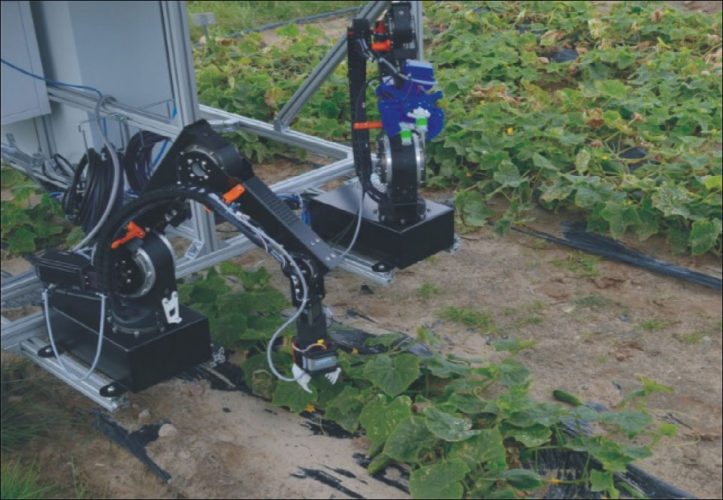 A prototype of the dual-arm robot system during the first field tests. Picture: Fraunhofer IPK

It is a considerable challenge to design autonomous systems capable of optical and tactile sensing, assessing and evaluating. The challenge is only compounded by cucumber harvesting: a robot must identify green objects camouflaged by green surroundings. In addition, cucumbers are randomly distributed throughout a field, and some are concealed by vegetation.

Varying light conditions make the mission all the more difficult. It should be possible to use multispectral cameras and intelligent image processing to help locate cucumbers and guide the robot’s gripper arms to pluck them. This part of the CATCH project is overseen by CSIC-UPM, the Spanish project partner.

A special camera system helps ensure that the robot detects and locates approximately 95 per cent of cucumbers, an impressive success rate. The goal is to advance the technology so that the robot picks all the ripe cucumbers to foster growth of new ones. Fraunhofer IPK has developed robot arms with five degrees of freedom on the basis of hardware modules developed by igus GmbH in Cologne.

The IPK project experts are tasked with developing three gripper prototypes: a gripper based on vacuum technology, a set of bionic gripper jaws (Fin Ray®) and a customised “cucumber hand” based on OpenBionics robot hands. They are relying on insights acquired during a previous European research project, in which they developed a dual-arm robot control system with efficient task-oriented programming for Workerbot I – a humanoid robot capable of industrial assembly.

Project experts from IPK are enhancing this system so that it can plan, program and control the behaviour of robots harvesting cucumbers. These preprogrammed behavioural patterns make bimanual searching possible, meaning the robot can look for cucumbers as a human would.

Dr. Dragoljub Surdilovic, a scientist at Fraunhofer IPK, said: “The robot can, for example, push leaves to the side using symmetrical or asymmetrical movements, or congruent and incongruent movements. As a result, it can automatically change directions on the fly to approach and then grasp a cucumber.”

The goal is to create an intelligent control system capable of making judgement calls: assigning a certain task to a certain gripper arm, monitoring cucumber picking and dealing with exceptions.

In July 2017, the Leibniz Institute for Agricultural Engineering and Bioeconomy used various types of cucumbers to conduct initial field testing of the robot system at its test site. The institute also tested harvesting new types of cucumbers with distinguishing features that make them easier to pick. In short, the first round of testing validated basic functionality.

Since autumn 2017, project partners have been conducting additional tests in a Leibniz Institute greenhouse. Researchers are especially eager to scrutinise the extent to which interference or malfunctions affect the efficiency and robustness of the system. Once testing of the lightweight robot has been completed, project partners will strive to make it commercially viable. Companies, cucumber farmers and agricultural associations have expressed considerable interest in the dual-arm robot. In November 2017, the CATCH project was unveiled to the general public at Agritechnica, the world’s leading trade fair for agricultural technology. The German Agricultural Society (DLG e.V.) exhibited the robot at its Agritechnica booth, eliciting enthusiastic feedback from agricultural specialists and numerous companies.

Domino’s set up shop in Uruguay and Latvia