In Northern Ireland and Wales, where it has become mandatory for food retailers to display their Food Hygiene Rating, safety compliance has risen. 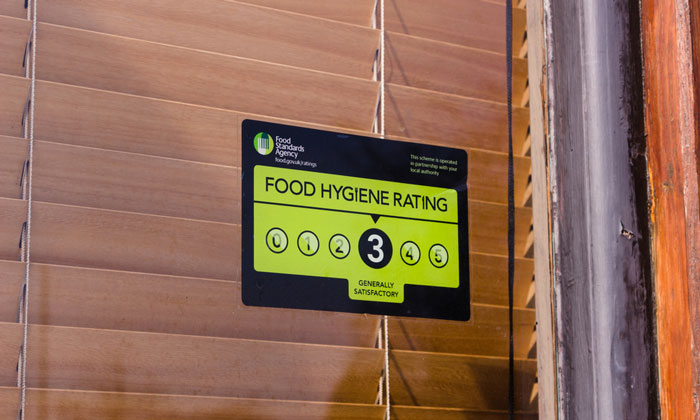 SCRUBBING UP: The Food Hygiene Rating Scheme rates the premises from 0 to 5

A new report by the Food Safety Authority’s (FSA) Chief Scientific Adviser has shown the legal obligation to display hygiene ratings in parts of the UK has been beneficial to overall food safety.

Under devolved powers, the legal requirement to display has been in place in Wales since 2013 and Norther Ireland since 2016. Though the rating system is in place in England there is no requirement for food sellers to show their customers their score on their premises.

As of September this year, 67 per cent of businesses with a rating were achieving the top standard of ‘5 – very good’ and 95 per cent were achieving ‘3 – generally satisfactory’ or better.

A study produced by the FSA’s Chief Scientific Adviser, Professor Guy Poppy, makes an argument for England following the other regions into a mandatory system.

Professor Poppy said: “The Food Hygiene Rating Scheme (FHRS) has been a significant development for food safety and one which has delivered tangible benefits for consumers across the country. The scheme has empowered people, helping them to choose to eat in places with higher ratings. This in turn has pushed restaurants and other food businesses to drive up hygiene standards to attract more customers. I’ve also been encouraged that our research has linked higher ratings to lower levels of microbes found in food businesses, ultimately lowering the risk to consumers from foodborne illness.

“Mandatory display of hygiene ratings has been successful in Wales and Northern Ireland and I am pleased that the FSA remains committed to seeing these benefits also realised in England.”

The evidence for this comes from work the FSA commissioned NatCen Social Research to carry out. NatCen looked two similar local authorities: one which had FHRS and another that did not. They then looked at how much individual businesses in those local authorities complied with food hygiene law and split them into three categories: poorly compliant, broadly compliant and fully compliant.

In the second year, the proportion of fully compliant businesses in the FHRS authority was 54.7 per cent, 3.3 per cent higher than the number in the non-FHRS authority.

Professor Poppy’s report goes on to look at indirect measures of food safety and the association between them and premises that were compliant with food hygiene law as above. These measures were: the level of compliance and the results from microbiological contamination samples, and the level of compliance and identified foodborne disease outbreaks.

Prof Poppy said: “While unsatisfactory samples will normally not cause illness they are an indicator of general levels of hygiene, and one would expect, all other things being equal, would be related to the risk of illness.

“Assuming that the risk of foodborne illnesses is proportional to the likelihood of a premises having unsatisfactory samples, then for every 1 per cent increase in the number of broadly compliant premises we might expect to see a decrease of between 1000 and 2000 cases of foodborne illness each year, with an associated reduction in burden to the UK economy in the region of £2.9m to £5.7m.

“The analysis found that ‘broadly compliant premises’ have a smaller chance of a foodborne disease outbreak than those that are not broadly compliant. The period of analysis was over 2010 to 2014 and the findings were statistically significant at the 95 per cent confidence interval.”