Putting cactus on the menu: FAO extols the virtue of prickly plants

The Food and Agricultural Organization of the United Nations (FAO) and International Center for Agricultural Research in the Dry Areas (ICARDA) worked with experts to write the book on cacti. Crop Ecology, Cultivation and Uses of Cactus Pear spreads knowledge of how to manage the plant effectively. It also gives readers an insight into its […] 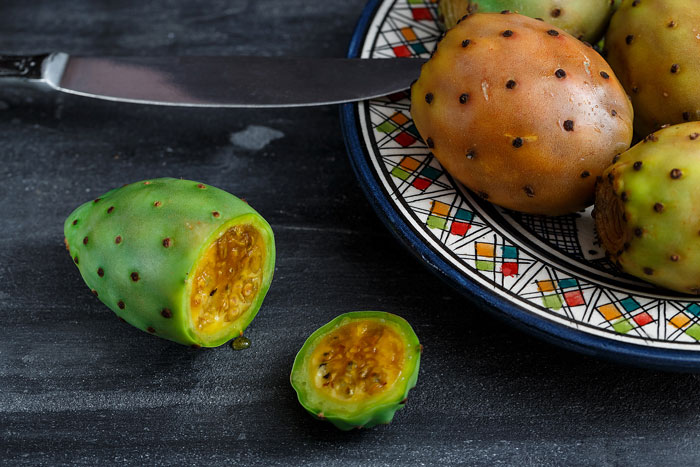 DINE ON SPINE: While most cacti are inedible, the Opuntia species (example above) has much to offer

The Food and Agricultural Organization of the United Nations (FAO) and International Center for Agricultural Research in the Dry Areas (ICARDA) worked with experts to write the book on cacti.

Crop Ecology, Cultivation and Uses of Cactus Pear spreads knowledge of how to manage the plant effectively.

It also gives readers an insight into its genetic resources, physiological traits, soil preferences and vulnerability to pests. Tips are provided on how to exploit the plant’s culinary qualities as has been done for centuries in its native Mexico and is now a well-entrenched gourmet tradition in Sicily.

During the recent intense drought in southern Madagascar, cactus proved a crucial supply of food, forage and water for local people and their animals. The same area had once suffered a severe famine as the result of efforts to eradicate the plant, which some saw as a worthless invasive species. It was quickly reintroduced.

While most cacti are inedible, the Opuntia species has much to offer, especially if treated like a crop rather than a weed run wild. Today the agriculturally relevant Opuntia ficus-indica subspecies – whose spines have been bred out but return after stress events  – is naturalised in 26 countries beyond its native range. Its hardy persistence makes it both a useful food of last resort and an integral part of sustainable agricultural and livestock systems.

“Climate change and the increasing risks of droughts are strong reasons to upgrade the humble cactus to the status of an essential crop in many areas,” said Hans Dreyer, director of FAO’s Plant Production and Protection Division.

Cactus pear cultivation is slowly catching on, boosted by growing need for resilience in the face of drought, degraded soils and higher temperatures.

It has a long tradition in its native Mexico, where yearly per capita consumption of nopalitos – the tasty young pads, known as cladodes – is 6.4 kilograms. Opuntias are grown on small farms and harvested in the wild on more than 3 million hectares, and increasingly grown using drip irrigation techniques on smallholder farms as a primary or supplemental crop.

Today, Brazil is home to more than 500,000 hectares of cactus plantations aimed to provide forage. The plant is also commonly grown on farms in North Africa and Ethiopia’s Tigray region has around 360,000 hectares of which half are managed.

The food and forage potential

The cactus pear’s ability to thrive in arid and dry climates makes it a key player in food security.

Apart from providing food, cactus stores water in its pads, thus providing a botanical well that can provide up to 180 tonnes of water per hectare – enough to sustain five adult cows, a substantial increase over typical rangeland productivity. At times of drought, livestock survival rate has been far higher on farms with cactus plantations.

Projected pressure on water resources in the future make cactus “one of the most prominent crops for the 21st century,” said Ali Nefzaoui, a Tunis-based researcher for ICARDA.

Various chapters in the book explore the potential of cactus cultivation, reporting that Tunisian barley yields rise when cactus is grown alongside as a soil-improving alley crop, and noting preliminary research that suggests including cactus in cattle diets reduces the ruminants’ methanogenesis, thus contributing to lower greenhouse gas emissions.

Yields of commercially grown Opuntia vary substantially according to place, cultivar and growing technique. Harvesting more than 20 tonnes of fruit per hectare is common in Israel, Italy and where irrigation is used in Mexico – a few cases of 50-tonne yields have been reported – but output is lower in most arid and rainfall-dependent locations.

The cactus pear’s biological trick is a special kind of photosynthesis – crassulacean acid metabolism – that allows them to take in water during the night.

Still, there are limits. Below-freezing temperature causes irreversible damage to pads and fruit. And while the O. ficus-indica can usually survive exposure to temperatures up to 66 degrees Celsius, its photosynthesis starts to slow above 30 degrees, which is why they aren’t seen much in the Sahel or Mojave deserts.