Keychain allergen detector to put food retailers on the spot

Scientists are developing a $40 device, small enough to fit on a keychain, that can accurately test for allergens in food. 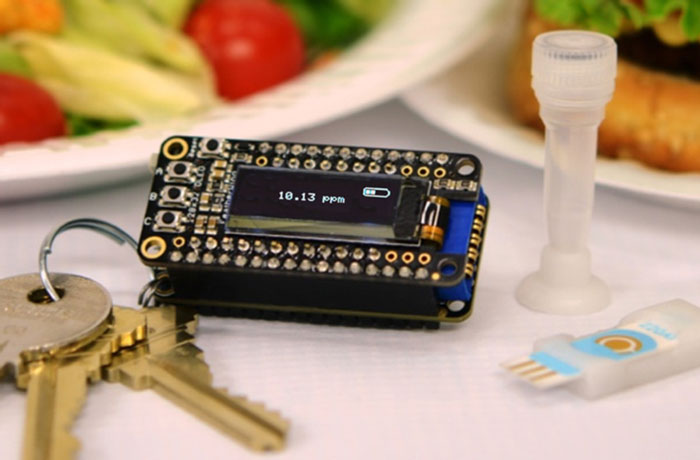 SMALL PACKAGES: The iEAT system for onsite antigen detection consists of a pocket-size detector, an electrode chip, and a disposable kit for allergen extraction. The detector connects with a smartphone for system control and data upload to a cloud server. Credit: Lin, et al. ACS Nano, Aug-2017

Consumers may soon have the power to analyse their own food for traces of allergens according to researchers at Harvard Medical School in Boston.

The scientists have developed a pocket-sized detector which can feed chemical data about a sample of food to a smart phone application.

It is called integrated exogeneous antigen testing (iEAT) and consists of three components.

First, the consumer places a small sample of the food in question in a test tube to dissolve. Magnetic beads that capture selected allergens, such as gluten, are added to the solution. A drop of the mixture is placed onto electrode strips on a small module that is then inserted into the reader – the keychain-sized device.

Data is collected indicating whether the allergen is present and, if so, in what concentrations. This is shown on a small display or channelled into a user’s smartphone through the iEAT app.

Development of the iEAT system was led by co-senior team leaders Ralph Weissleder, M.D., Ph.D., the Thrall Professor of Radiology, Professor of Systems Biology at Harvard, and Director of the Center for Systems Biology (CSB) at Massachusetts General Hospital (MGH); and Hakho Lee, Ph.D., Associate Professor in Radiology at Harvard, Hostetter MGH Research Scholar, and Director of the Biomedical Engineering Program at the CSB, MGH. The work, is published in the August 2017 issue of ACS Nano.

“This invention is a fortuitous combination of the interests and expertise of Drs. Weissleder and Lee in developing tools for early disease detection, magnetic sensors, and point-of-care diagnostics,” said Shumin Wang, Ph.D., Director of the NIBIB programme in Biomagnetic and Bioelectric Devices.

“They have taken technologies they developed for other medical problems, such as early cancer detection from blood samples, and applied them to solving the daily, potentially life-threatening difficulties of people with food allergies—a highly significant public health problem that incurs 25 billion dollars in annual costs in the U.S. alone.”

Dr Weissleder added: “High accuracy built into a compact system were the key goals of the project. Users can be confident that even if they are sensitive to very low levels, iEAT will be able to give them exact concentrations.

“Armed with accurate concentration levels they will not have to completely avoid potentially problematic foods, but will know whether an allergen is at a dangerous level for them or a concentration that is safe for them to eat.”

The high level of accuracy is very important. For example, even though Federal standards say that a food is considered gluten free if it has a concentration of less than 20 mg per kg of gluten, everyone’s sensitivity is different, and many people would have a reaction at much lower gluten concentrations.

Extensive testing of iEAT revealed that the system could detect levels of gluten that were 200 times lower than the Federal standard.

Beyond obtaining the information they need in about 10 minutes using iEAT, the mobile phone app offers the possibility of addressing food allergies at the community level. Using the app, consumers can compile and store the data they collect as they test different foods for various allergens at different restaurants and even in packaged foods. The app is set up to share this information online with both time and location stamps indicating when, where, and in what food or dish an allergen reading was taken.

With the app, people will eventually have a personal record of levels that trigger a reaction. Others with the app will be able to find restaurants with foods they like to eat that consistently have no or low levels that are below the individual’s triggering concentration.

“Although we believed iEAT could address a significant public health problem, we were surprised at the amount of interest the device has generated. We are receiving calls from people asking if we can adapt iEAT to test for other substances such as MSG or even pesticides,” said Hakho Lee, Co-senior Leader of the project. “The good news is that we definitely can adapt the device to test for just about any allergen or substance.”

The researchers have granted a licence to a Boston start-up hoping to make iEAT commercially available. The company wants to merge the components of the device into a single module to make it more convenient to use.

In addition to contributing to food safety at the individual and community levels in the U.S., the inventors point out that the device would be very valuable for travellers in countries where there are no specific requirements for food labels.

Another use of the system would be to trace the source of food contamination with bacteria such as E. Coli or Salmonella to a specific food-processing site by testing DNA in the samples to potentially identify and contain an outbreak more quickly.