Brexit could slash the average British farm’s profit in half

A new report paints a dark picture of the worst case scenario of leaving the European Union – but the message is ‘get fit for the future’. 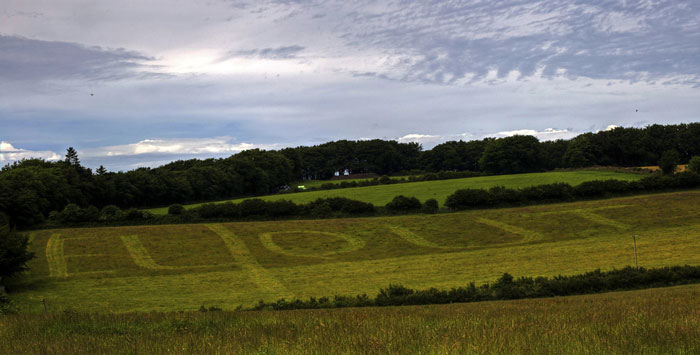 EU OUT: A farm in Devon mowed with pro-Brexit slogan during the campaign to leave the EU.

The profitability of Britain’s average farm could drop by 61 per cent if circumstances conspire to trigger the bleakest outcome for the UK as it splits with the European Union.

This is the warning issued by the Agriculture and Horticulture Development Board’s (AHDB) Horizon report, Brexit Scenarios: An Impact Assessment.

The levy board’s report charts three possible outcomes of the Brexit process, using modelling to predict how each will impact the Farm Business Income (FBI) across various farming sectors.

Evolution, Unilateral Liberalisation and Fortress UK represent variances in tariffs and support as well as labour.

It is the second of these scenarios, Unilateral Liberalisation, that paints the bleakest picture of a post-Brexit slump. In it, almost all of the farming sector, with the exception of pig farming, sees a drop in income. The average falls from £38,000 to £15,000 a year.

In the first, Evolution, business continues much as usual with most aspects of policy, regulation and trading relations remaining as near to unchanged as possible. This results in a boost for the average farm from £38,000 to £41,000.

Fortress UK, the final category, describes an outcome where trade only takes place under WTO Most Favoured Nation tariffs. The result is a 47 per cent drop in profitability.

But it isn’t all doom and gloom. While the results differ on a sector-by-sector basis, the top 25 per cent of businesses still remain profitable.

AHDB said farmers have the chance now to learn from that high-performing group and to use them as a benchmark for what is achievable in the way they run their own farm businesses.

Phil Bicknell, AHDB Market Intelligence Director, said: “This analysis underlines the fact that performance matters. As individual farms, we know that we can’t determine policy but we can recognise that performance is key to preparing for the challenges ahead.

“Buzzwords like competitiveness, resilience, productivity are not new to agriculture but Brexit brings renewed focus on farm performance. Do nothing and businesses that are currently profitable run the risk of heading into the red. There is plenty that individual businesses can do now to get fit for the future.”

The analysis was launched at AHDB’s Grain Market Outlook Conference this week.

The board, which is independent of both the Government and the commercial sector, will present the analysis and explore what actions farmers can take in advance of Brexit to better prepare for change at AHDB/NFU Brexit roadshow events around the country.

Running from October 18 to November 2 at 18 locations, the events will also see the NFU present its latest thinking on the development of a domestic agriculture policy aimed at helping farmers to mitigate volatility, enhance productivity and to deliver environmental benefits. NFU members can reserve their place by contacting their NFU Regional Office.

All AHDB’s analysis on the implications of Brexit for UK agriculture and horticulture can be downloaded at www.ahdb.org.uk/brexit