Detector can spot traces of horsemeat in one hour

Methods of testing raw meat DNA in lab conditions can often fail to differentiate between species. A Spanish research team has set out to tackle that problem. 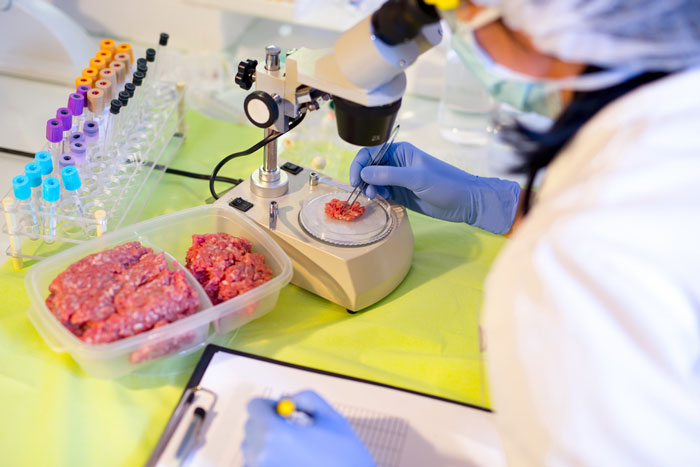 UNDER SUSPICION: The new technique can identify unique strands of mitochondrial DNA.

Researchers at Complutense University of Madrid have invented a biosensor that can detect traces of horsemeat in beef at a concentration of just 0.5 per cent.

The technology, announced in the journal Analytical Chemistry, could make it far more difficult for would-be-defrauders to adulterate their beef – a practice that made headlines in 2013.

It works by analysing mitochondrial DNA found in a sample. Mitochondrial DNA is significantly more resistant to industrial processing than its genomic or nuclear counterpart. In horses’ DNA there is a fragment unique only to the species. This fragment is identified using an RNA probe.

Complutense University’s biosensor was able to discriminate between raw beef and horsemeat using just 50 nanograms of extracted mitochondrial DNA without any previous fragmentation. Discriminating between 100 per cent raw beef and samples adulterated with just 0.5 per cent horsemeat means that the sensor can detect whether the product contains traces above the limits set by the European Commission.

The researchers claim that their work can be adapted easily to spot other meat adulterations using mitochondrial DNA fragments specific to the suspect animal in question and equally specified probes.

The horsemeat scandal of 2013 was the highest-profile example of food fraud in the recent years. It was unearthed when horse DNA was found in beef sold in UK and Irish supermarkets. In July, Andromicus Sideras, who worked for Flexi Foods, the company responsible was found guilty and sentenced to four-and-a-half years behind bars for conspiracy to defraud. Co-conspirators Ulrich Nielsen and Alex Ostler-Beech were also found guilty. Nielsen was given a three-and-a-half year term. Ostler-Beech was given a suspended sentence.

The future of food auditing