20 US hotspots where nitrogen reduction programmes could be targeted

Researchers say the study is the first of its kind and provides a comprehensive look into where nitrogen reduction programmes could have the most success in the US. 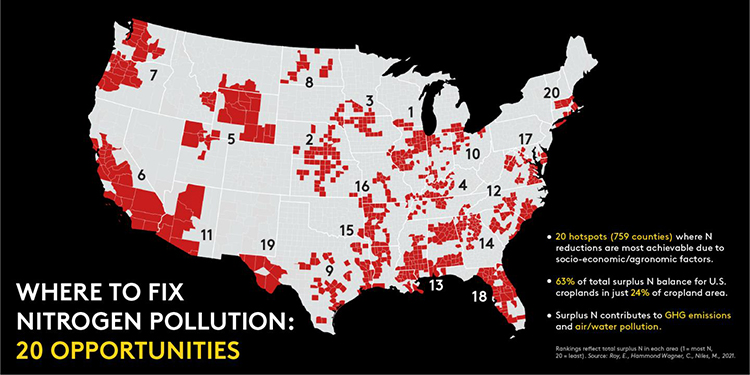 Here are the regions of the US that could benefit most from Nitrogen reduction programmes according to the study Credit: University of Vermont

A study of US nitrogen use in agriculture has identified 20 places across the country where farmers, government, and citizens should target nitrogen reduction efforts.

Nitrogen from fertiliser and manure is essential for crop growth, but in high levels can cause problems, including coastal “dead zones”, which organisms struggle to survive in, and increased greenhouse gas emissions.

The 20 nitrogen “hotspots of opportunity” represent 63 percent of the total surplus nitrogen balance in US croplands, but only 24 percent of US cropland area. In total, they comprise 759 counties across more than 30 states, according to the study published in Environmental Research Letters by researchers from the University of Vermont.

The top-ranked hotspot to target, based on total excess nitrogen, is a 61-county area across Illinois, Indiana, Missouri and Wisconsin. That’s followed by a 55-county region in Kansas and Nebraska in second place, and 38 counties in Iowa, Minnesota and South Dakota in third (a full list of the hotspots can be found here).

Several of the 20 hotspots with high nitrogen balances per acre reportedly surprised the researchers, particularly in the West and South. These included a 32-county hotspot in Idaho, Montana, Wyoming and Utah, and six hotspots across Texas, Louisiana, Mississippi, Alabama, Georgia, and Florida. Also on the list are chronic nitrogen problem areas, such as the Mississippi River Basin, Chesapeake Bay, and California’s Central Valley.

“This study provides new perspective on where to focus efforts to tackle America’s nitrogen problems,” said lead author Eric Roy of the University of Vermont (UVM).

“The US has so many nitrogen trouble zones, and making progress will be easier in some locations than others. That’s why this research is important. It reveals where programs aiming to increase the efficiency of farm nitrogen use are most likely to be successful.”

Why these particular 20 hotspots?

First, the study claims that nitrogen inputs are so high in many of these areas that farmers can most likely reduce nitrogen use without hurting crop yields. “This is a crucial finding because farmers naturally worry about lower crop yields when reducing nitrogen inputs,” said UVM co-author Meredith Niles. “And we don’t want to compromise food security goals.”

Secondly, and perhaps most importantly, researchers say the study is the first to provide a robust, national analysis of underlying social, economic and agronomic factors linked to nitrogen balances on croplands at the county-level. That makes it one of the most comprehensive studies of US nitrogen use to date.

By examining these predictors, researchers were able to identify nitrogen hotspots where reductions in excess nitrogen are most achievable. Surplus nitrogen use was higher than expected in these regions based on the mix of underlying factors, which in turn suggest there would be less barriers to successful nitrogen reduction efforts.

“This suggests that nitrogen reduction programs, including those that offer farmers’ financial incentives, have the highest potential for success in these 20 regions,” said co-author Courtney Hammond Wagner of Stanford University, who recently completed a PhD at University of Vermont.