History has warned us that as food prices rise, rioting is likely to follow. Here, Professor Chris Elliott points to a few key moments in history and calls on the UK Government to wake up.

The idea that food riots could ensue in the UK due to the rise of food prices and shortages is probably not top of consumers’ minds. But if history tells us anything, it’s that these two facets have been the cause of many civil unrests before.

By a striking coincidence, one of these moments can be tracked back to the mid-1650s in Russia, when an uprising, as a result of governmental action, triggered a hike in bread prices. And how many of you knew that the French revolution was directly related to food prices? The famous ‘Women’s March on Versailles’ arose because of the riots in Paris marketplaces – a reaction to the lack of affordable bread. I could easily list another dozen historic examples of where riots, uprisings and unrest are all linked to the sudden price increase of food staples, but let’s turn instead to the present. 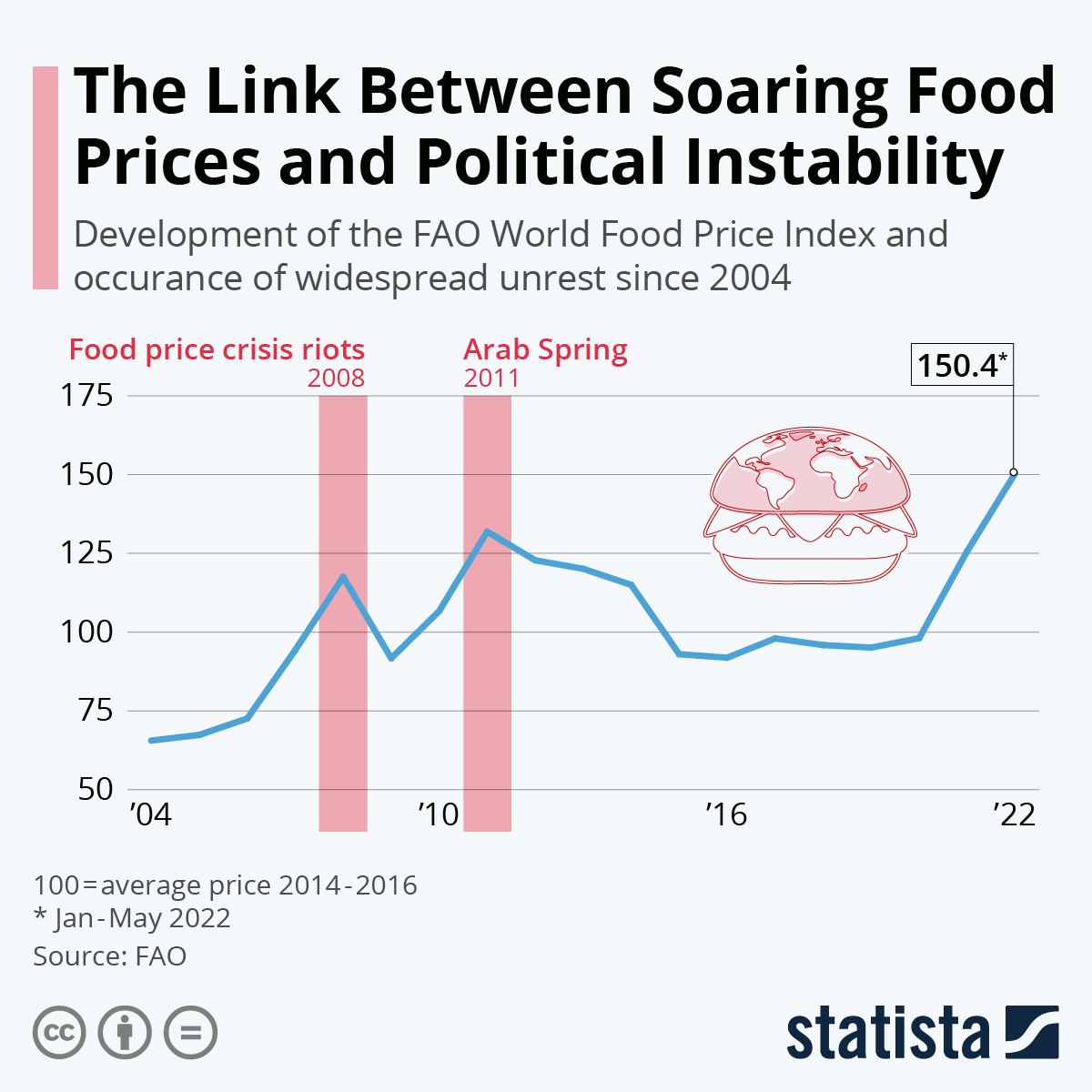 The recent links between soaring food prices and political instability has been plotted using FAO data and there is a clear trend to behold. Figure 1 shows that as food prices rise in areas such as Iraq and Sri Lanka, people are taking to the streets to protest. You might think this is all about the developing world and that such events simply cannot happen in modern times in a developed country, but when the highly respected consumers’ champion Martin Lewis writes in a piece in the Telegraph, ‘When people can’t afford food, they get angry – civil unrest isn’t far away’, then large plumes of black smoke are just on the horizon.

Consider what has happened in a just a few years – from Brexit, to Covid and now the Ukraine crisis; and, of course, one must also not forget the surging issues linked to the climate change – all of which have inevitably fuelled a destabilisation of food prices in the UK. For most people, the events seen over the last three years would have previously been the work of fiction. Unfortunately, what is happening is very real and could likely lead to rioting. Yet our blindfolded government remains mostly in denial, a mode they have become accustomed to even when faced with compelling evidence.

So what can be and should be done? I have seen first hand some real leadership coming from the Scottish government. Scotland’s Rural Affairs Secretary, Mairi Gougeon has called for an urgent four-nations summit to determine how best to deal with the massive hardship that abounds the agricultural and food sectors in the UK. This must be viewed in a wider context, so we are able to help as many as possible from going hungry. Indeed, as the dependency on food banks increases, it is imperative that this massive societal issue is acknowledged and tackled quickly.

But I see horrible parallels with the great famines of Ireland in the 19th century. An uncaring government more concerned with economics than the people they serve and those in dire need. Is it really unthinkable that we would see food riots in the UK? Perhaps as unthinkable as a pandemic or witnessing Russian forces conducting genocide in the streets, towns and cities of Ukraine.