As war rages on, New Food’s Joshua Minchin reflects on past events and questions how likely it is that food could be used as a weapon against Ukrainians. 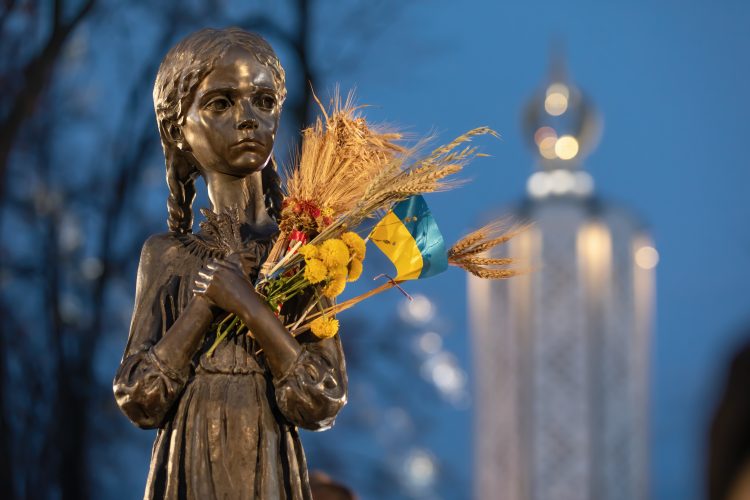 The Holodomor memorial in Kyiv offers a stark warning

The phrase ‘out of the frying pan and into the fire’ feels apt for the current situation facing, not just the food and beverage industry, but the world. If the trials and tribulations of a once in a lifetime pandemic were not enough, we are now seeing war on the European continent.

War has not been a stranger to Europe – just ask the residents of Sarajevo or Mostar – but I had rather hoped that the concept of one sovereign nation bombarding the residential districts of another had been consigned to the history books. If we have learned anything in the past two years, it’s that the situation can always get worse.

At New Food, we have dedicated plenty of time and virtual column inches to the impact that the conflict in Ukraine might have on the food and beverage industry; and those consequences should not be taken lightly (you can read about the potential industry pressures here).1 But another side to this looming crisis that is an additional cause for concern is the potential use of food deprivation as a weapon. My fears were, in part, validated by a grim address to the European Commission by Agriculture Commissioner Janusz Wojciechowski on Wednesday 23 March, 2022.

“I also spoke with Deputy Minister Taras Dzoba, who said that Russia is taking Ukrainian soil and using it as a weapon. A weapon against its own people; a weapon of starvation,”2 Wojciechowski said in a statement which promised European support both for the food system in Ukraine, but also for those countries reliant on imports from Russia and Ukraine.
Wojciechowski’s words could be dismissed as impassioned political rhetoric, but I feel they should be heeded as the warning they intended to be. Food, of course, plays an important role in every society, but it has been a central character in the historical tapestry of Russia, Ukraine and the entire territory of the former Soviet Union many times before.

It is less than 100 years ago that millions of Ukrainians were forcibly starved in the Holodomor (literally death by hunger in Ukrainian).3 There have been plenty of catastrophic famines around the world since then and these should not be downplayed nor dismissed, but rarely is such an event engineered.

Grain requisition policies, designed in part to drive agricultural collectivisation and to crush Ukrainian dreams of autonomy, were enforced by Stalin’s Politburo. Fines for not meeting grain quotas were seized in the form of other foodstuffs, and citizens were banned from fleeing the region. The ruined streets of Kyiv and Kharkiv broadcast on the Ten O’clock News are no stranger to suffering; in 1932 they were adorned with starving peasants.

Far more informed scholars have discussed the causes and effects of the Holodomor, particularly the sensitive debate on whether it can be called genocide, but perhaps it is incumbent on all of us to remember the Holodomor, or learn about it, now more than ever.

There are considerable fears that Russia’s targeting of Ukrainian farmland is no accident. If the Kremlin cannot overrun its neighbour in a matter of weeks, then it may well play the long game – and that is when food can be used as a weapon. It’s a technique as old as conflict itself, and Russia is all-too intimate with it – remember more people starved in Leningrad (now St Petersburg) as a result of the German siege of 1941‑44 than were killed as a result of the atomic bombs dropped on Japan and the London Blitz combined.

It is understandably terrifying to see explosive ordnance falling on a European capital – but we should be equally concerned about the looming spectre of hunger over Ukraine and, indeed, the countries it supplies.

Food, or the withholding of it, can be a far more destructive weapon than any bomb. It is up to governments around the world, plus actors in the food industry, to ensure that Ukraine’s people do not starve.