The rural poor in Ethiopia tend to live near lower-quality markets that sell food at high prices, impacting the health of children, a study from the International Food Policy Research Institute has found. 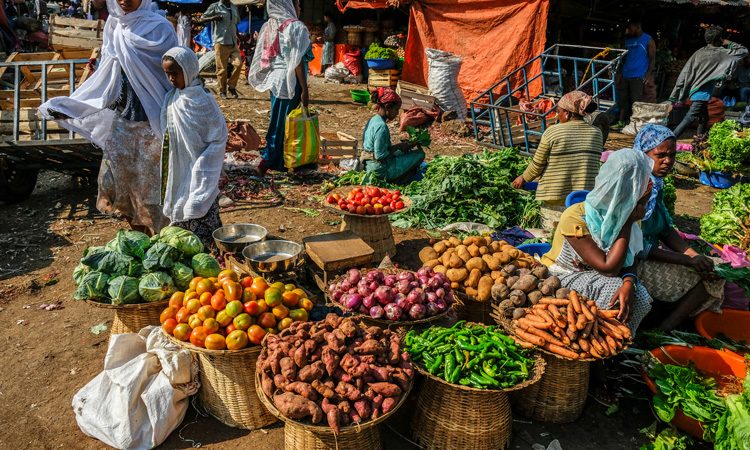 The rural poor in Ethiopia tend to live near lower-quality markets that sell fewer food groups at high prices, adversely impacting the health of children in these communities, a study from researchers at the International Food Policy Research Institute (IFPRI) has found.

The findings, drawn from data from rural Ethiopia, mark the first attempt to examine how rural markets vary in their diversity, competitiveness, frequency, and food affordability, and how these characteristics are associated with children’s diets.

“Despite some improvements in recent years, the quality of child diets in rural Ethiopia is still shockingly poor, especially in our survey areas where most children just eat basic staples and not much else,” said IFPRI’s Senior Researcher Derek Headey, co-author of the study. “But the touted solution to this problem has always been farm-level diversification, with little policy focus or research on the physical markets where even poor people obtain most of their non-staple foods.”

The study, Rural Food Markets and Child Nutrition, co-authored by IFPRI’s Derek Headey and Kalle Hirvonen; Cornell University’s John Hoddinott; and Lafayette College’s David Stifel, used an innovative longitudinal survey of both households and food markets in some of the poorest areas of rural Ethiopia.

The researchers used these data to assess which of the seven food groups recommended by the World Health Organization (WHO 2008) were consumed by young children, and then assessed whether local food markets sold these foods and at what cost.

The study also revealed an association between the number of traders selling food and consumption of non-staple foods; in markets with more than 20 food sellers, the likelihood that a child consumes a non-staple food group rises by about 12 percent.

While rural Ethiopia is agriculturally diverse, the study sites are all situated in poor, food-insecure localities where even the relatively better off are poor in absolute terms. Prices for non-staple foods in almost all survey sites were high: on an average, the cost of a calorie from a non-staple food is 12 times higher than a calorie from the cheapest staple. “Those findings suggest that poverty and high prices are major constraints on the ability of markets to improve rural diets,” said Stifel.

Ultimately, the findings suggest that sizeable improvements in rural diets depend on improved access to high-quality markets that deliver a wide array of healthy foods at affordable prices. “The agricultural foundations of better rural markets likely stem not from increased specialisation at the farm level but from diversification at the food system level, resulting in even greater dependence on markets for both agricultural sales and food purchases in the long run,” Headey said. “How best to accelerate the development of higher quality rural food markets is a critically important area for future research.”

The study was published in American Journal of Agricultural Economics.