The shrub that could feed Africa

Researchers have identified a common shrub that, when planted next to crops, can increase crop production by up to 900 per cent. 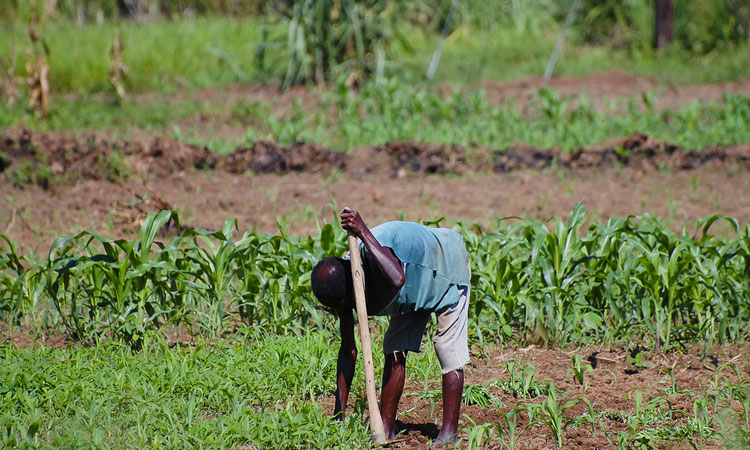 A shrub native to Africa could be a solution to boosting crop production in areas prone to drought and food insecurity.

Growing these shrubs next to millet increased the production of millet by over 900 per cent.

Soil scientist Professor Richard Dick, was travelling through rural Senegal in West Africa an identified how low-lying shrubs were growing well despite arid conditions meaning other vegetation had been wiped out.

“I said, ‘Wow, there’s some biomass! What’s that?'” he said, referring to his team’s initial interest in finding organic matter to improve soil in the area. Since then, Prof Dick and long-term lead collaborator Ibrahima Diedhiou of Senegal have discovered many ways in which the shrubs benefit soil and crops.

The researchers found that these shrubs – when planted adjacent to millet – can share the precious water they draw in and boost production of one of the primary grains that provide nutrition to West Africans.

“People in this part of Africa rely on locally grown crops to survive. Finding ways to increase food production, especially during times of severe drought, is critical,” said Dr Dick, a Professor of Soil Microbial Ecology at Ohio State.

“As things stand now, the population is continuing to climb, there’s no more land and yields are staying flat.”

Certain woody shrubs, such as the Guiera, can ‘share’ their water with millet plants below the surface of the soil. Millet, along with sorghum, is an essential food source in Senegal.

The researchers said that farmers there and in other parts of the African region called the Sahel have been allowing these shrubs to grow alongside crops to varying degrees – likely for thousands of years. Some cut them back or rip them out and burn them and they’ve been largely unrecognised as a resource for crops, Prof Dick said.

The research team developed an  innovative crop management system that they call the “optimised shrub system” that takes advantage of these readily available shrubs.

Their approach involves the dramatic increase of shrub density in farmers’ fields from fewer than 300 shrubs per hectare (about 2.5 acres) to 1,500 shrubs on that same plot of land. Their system also includes fertilising the ground with the shrub leaves and stems rather than burning this organic matter.

Along with a dramatic increase in yields, this system improves soil quality, boosts nutrients in the crops and reduces the time to harvest by about 15 days, which is important in an area plagued by low rainfall, Dick said.

The newly published research details one of the ways in which the plants benefit their neighbors.

The shrubs’ roots grow deep into the soil, searching for moisture 30 to 40 feet beneath the ground surface. That obviously better equips the shrubs themselves to survive tough, dry conditions.

But how do they share the liquid wealth? Dick and his collaborators created an experiment in which they were able to track water that moved from deep tap roots into adjacent pearl millet (Pennisetum glaucum).

They found that, at night – when the shrubs weren’t busy with sunlight-dependent photosynthesis – the water drawn from deep underground leaks out through surface roots into the surrounding soil rather than exiting through the leaves.

The stomata – the “pores” on the leaves of a plant – close in the dark, when photosynthesis stops, Prof Dick explained.

And that meant the millet plants’ roots near the surface are able to take up water delivered to the surface by the shrubs.

The researchers confirmed this by tracking water from its initial entry into the shrubs’ roots to its eventual presence in the millet leaves during a scientifically imposed drought experiment that included a comparison shrub-free field.

“We proved that ‘bioirrigation’ by these shrubs is happening and it’s the first time this has been shown for crop production,” Prof Dick said. “This is a native plant and it’s free and easy to grow – everything about this is positive.”

Now the team still wants to run pilot tests of their growing system with farmers throughout the Sahel and make any adjustments needed to foster more widespread adoption of the practice.

Finding natural, easy-to-employ solutions to feed a growing population has great potential in West Africa, Prof Dick said. In other areas of the world, including Southeast Asia and South America, farmers have adapted to population growth by extensive use of fertiliser and pesticides. But in Senegal and neighboring countries, agriculture is dependent on what nature provides – growers do not typically use fertiliser or pesticides, and do not have the resources to irrigate dry crops.

“This is a semi-arid region, where it rains only part of the year. Some years, there are major droughts and people go hungry,” Dick said, adding that between 60 and 90 percent of the Senegalese live in small, agricultural villages.

“The ultimate solution is going to be whatever is locally available, and finding these answers and working with the local farmers to consider potential agricultural techniques is paramount,” Dick said.

The study was published in the journal Frontiers in Environmental Science.