A survey of over 2,000 people in the UK has shown that Brits are less likely to buy imported meat after Brexit amid concerns of food mislabelling. 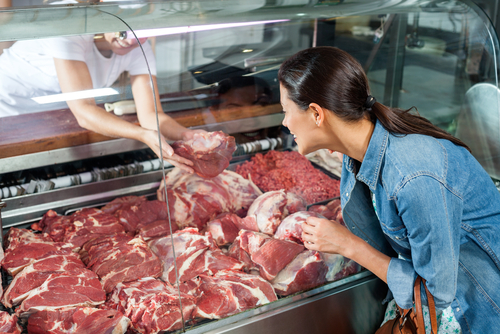 Shoppers may avoid buying meat if they cannot be sure it has been produced in the UK, amid concerns that standards on imported food will slip following Brexit resulting in food fraud, new research has revealed.*

Following warnings by the House of Lords EU Energy and Environment Sub-Committee that animal welfare and quality standards could drop as a result of Brexit; the survey conducted by ComRes suggests that shoppers could steer clear of the meat aisle if they can’t be sure products were farmed in Britain.

Nearly half (48 per cent) of British adults are less likely to buy meat if they cannot be sure it has been produced in the UK, while two in five (42 per cent) place the risk of food mislabelling among their top three concerns for imported food standards following Brexit.

The UK currently imports half of all its food, with over 40 per cent of imports coming from the EU or countries with EU trade deals.

The food industry has repeatedly warned that a no-deal Brexit could cause food prices to soar due to the UK’s reliance on imports, and that food mislabelling and food fraud could creep in due to a lack of coordination with EU regulators.

The EU cracked down on food fraud following the 2013 horsemeat scandal, where traces of horsemeat were found in food products labelled as beef.

The survey of over 2,000 UK adults commissioned by Oritain, a forensic traceability company, found that 69 per cent of people say that in the five years since the horsemeat scandal they have become more concerned that food may be different from what the label claims. Of those participating, 85 per cent agreed that if a food brand was involved in a food scandal, like the food fraud horsemeat scandal, they would be less likely to buy their products in the future.

Grant Cochrane, CEO of Oritain, said: “Shoppers are increasingly looking for assurances of where their food is from and now we’re seeing their trust in imported products waning. Modern food supply chains are incredibly complex – food can cross multiple borders and pass through many hands before it reaches our shelves. With each exchange the risk of food fraud and malpractice increases.

“Testing the intrinsic properties of food offers the assurances of origin that shoppers are looking for, rather than relying on labels or additives that can be forged or tampered with.”

Shoppers are now placing great value on food provenance. Nearly half (49 per cent) agreed they would pay more for food that has had its origin independently verified, while 71 per cent felt it was important to know where their food was produced when deciding what to buy.

Forensic science techniques traditionally used by crime scene investigators are now enabling food manufacturers to test the provenance of their products by verifying their origin.

Unlike other traceability methods such as DNA testing or barcodes, forensic science enables Oritain to test the naturally occurring isotopes and trace elements in food products, which are unique to the environment they were grown or reared in and can indicate exactly where the product was farmed.

*ComRes interviewed 2,053 adults in Great Britain online between 13-14 August 2018. Data are weighted to be demographically representative of all UK adults aged 18+.

Video: The Marketplace for CPG manufacturers