Orange is not the only colour: Scientists tint cheddar without staining whey

Orange whey is not considered commercially viable so cheddar makers often waste it. The new method could bring a welcome chunk of revenue back into the producer’s pocket. 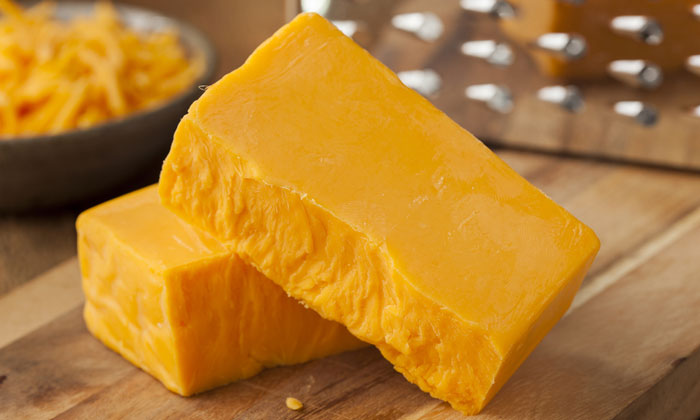 CHEDDAR GORGEOUS: The popular orange colour has no effect on the flavour of the cheese, instead it is often dyed because of a historical tradition with its roots in fraud

Scientists have discovered a method that can stain cheddar a customer-pleasing orange without staining the valuable whey.

Currently, colouring cheddar orange involves adding the South America-grown red annatto seed to the milk. The seed tints both the curd, which becomes the cheese, and the whey, which is often discarded because of its unusual colour.

The method discovered by researchers at Cornell University in New York spares the whey the change in hue, meaning it can be sold on for various products.

They created an annatto-infused microcapsule, coated with a natural shell of casein and a layer of fat, that, when added to milk, befriends the curd and leaves the liquid whey alone.

Dr Alireza Abbaspourrad, the Yongkeun Joh Assistant Professor of Food Chemistry and Ingredient Technology in the Department of Food Science, said: “As whey drains, it still contains a lot of lactose, protein and minerals, which can be a valuable additive when it is spray dried.

“Food companies can use the powder to add to food products, like infant formula or weight-training drinks, for example. But no one wants to use orange colour whey.”

Inside the curd, microcapsules open during the cheese-ageing process. As curds mature, the fat layer is degraded by enzymes that naturally dissolve and release reddish annatto (bixin) to colour the curds. “There’s nothing artificial, it’s all natural, it’s all green,” said Dr Abbaspourrad.

Assembling the microcapsules is a simple process. Imagine making a vinegar and olive oil salad dressing, and then vigorously shaking it – by way of a homogeniser – into an emulsion. The emulsion is then coated with fat and casein protein, which naturally sticks to the surface of droplets and becomes a group of microcapsules.

This system is quite pliant, said Dr Abbaspourrad: “The microcapsule shell’s composition is controllable, tunable and it can be optimised to use with other enzymes in other food systems or other media.”

This research, “Controlling the Release from Enzyme-Responsive Microcapsules with a Smart Natural Shell,” appeared earlier this year in the American Chemical Society’s Applied Materials & Interfaces. It was co-authored by doctoral student Raheleh Ravanfar (first author) and postdoctoral researcher Giovana Celli. The study was funded by Dairy Management Inc.