EU follows through with threat of retaliation in U.S. trade row

The EU’s Commissioner for Trade has expressed regret at being put in this position, but said there was ‘no other choice’. 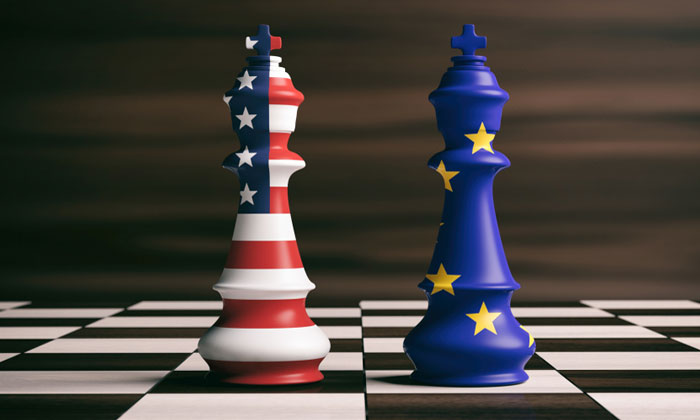 The European Union has followed through with a three-month-old threat to impose tariffs on certain products imported from the United States.

The ‘rebalancing’, as it has been termed by the European Commission, is a response to Donald Trump’s decision to level tariffs on steel and aluminium imports into the USA.

The EU’s measures will immediately target a list of products worth €2.8 billion and include several food and agricultural products such as rice, whiskey, peanut butter and orange juice. By putting these duties in place the EU is exercising its rights under the World Trade Organisation (WTO) rules.

Commissioner for Trade Cecilia Malmström said: “We did not want to be in this position. However, the unilateral and unjustified decision of the U.S. to impose steel and aluminium tariffs on the EU means that we are left with no other choice.

“The rules of international trade, which we have developed over the years hand in hand with our American partners, cannot be violated without a reaction from our side.

“Our response is measured, proportionate and fully in line with WTO rules. Needless to say, if the US removes its tariffs, our measures will also be removed.”

The announcement on Wednesday that the commission would be following through with its threat came after the notification of the full list to the WTO and its endorsement by the College of Commissioners on June 6, following the U.S. application of the full tariffs on EU steel and aluminium products. EU Member States have expressed their unanimous support for this approach.

The EU will rebalance bilateral trade with the US taking as a basis the value of its steel and aluminium exports affected by the US measures. Those are worth €6.4 billion. Of this amount, the EU will rebalance on €2.8 billion worth of exports immediately. The remaining rebalancing on trade valued at €3.6 billion will take place at a later stage – in three years’ time or after a positive finding in WTO dispute settlement if that should come sooner.

The full list of products can be seen here.