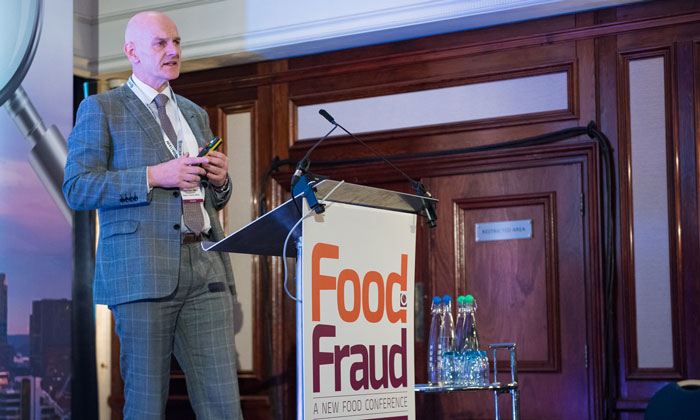 FRAUD THREATS: Chris Elliott setting out the scale of the challenge

Those were: defining the nature of fraud, treating it more seriously, forging partnerships and predicting vulnerable sectors, he told delegates.

“Five years on from the European horse meat crisis, we still don’t know how to define food fraud,” said the author of two influential government-commissioned reports on the scandal. But within 12-18 months, a new United Nations’ definition for food fraud will help to tackle the problem more effectively.

The second challenge was to treat food fraud more effectively. “We have a very long journey in thinking about food fraud as a criminal activity,” he said. Increasingly, food fraud was a growing global problem. “Wherever you look for fraud, in developed or developing countries, you will find it.”

Forging stronger partnerships to beat global fraud was the third challenge. “One of the fantastic things that happened in the past five years was the development of the Food Industry Intelligence Network,” said Professor Elliott.

The fourth challenge was to predict the likely occurrence of fraud more accurately, since it could be found “from salt to saffron and everything in between”. The most vulnerable sector at present was organic food production, where fraudulent activity was “very difficult to detect scientifically”.

But food sectors that were particularly vulnerable to fraud could be predicted from events such as recent crop failures. For example, the recent failure of the garlic harvest in China, the world’s biggest producer, had led to a significant increase in fraudulent activity involving this product.

“So, mapping crop failures and looking at supply chains could help to predict fraud six months to a year ahead of criminal activity,” said Professor Elliott.

Watch out for more reports from New Food’s Food Fraud Conference later this week. Meanwhile, you can also read Twitter posts about the event at #FoodFraud.