Technique developed to spot impurities in ground beef within minutes

Researchers at the University of British Columbia (UBC) have found a better way to identify unwanted animal products in ground beef. 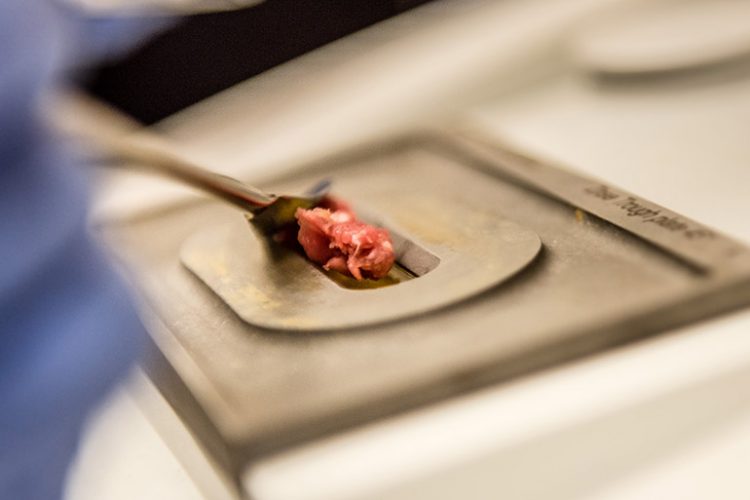 WHAT'S THE BEEF: Beef adulteration is behind one of the most notorious food fraud scandals of the last 20 years - Europe's horse meat scandal in 2013. Credit: Paul Joseph/UBC

Their new method can accomplish all of this in less than five minutes, which makes it a potentially transformative food inspection tool for government and industry.

“By using this innovative technique, the detection of food fraud can be simpler, faster and easier,” said the study’s lead author Yaxi Hu, a PhD candidate in UBC’s faculty of land and food systems.

DNA testing has proven efficient and accurate in identifying foreign species in meat products, but what DNA testing cannot do is identify offal—hearts, livers, kidneys and stomachs—mixed in with meat of the same species. Food fraud is the intentional misrepresentation of food products for economic gain. When producers hold an excess supply of meat or byproducts for which there is relatively little market demand, the potential exists for unscrupulous operators to try to pass those products off as something else. In the past five years, high-profile scandals in the U.K., Ireland, and Russia have seen lamb, chicken and even rat meat substituted for higher-quality meat products.

To establish their method, the UBC researchers aimed a spectrometer at meat samples they had prepared by grinding together beef and offal from local supermarkets at various concentrations. Because animal products all have different chemical compositions, their molecules absorb and scatter energy from the spectrometer’s laser in different ways. The spectrometer captures these signals—or spectra—to produce an “image” of each substance. These spectral images can serve as a library for comparison with other samples.

Whether a meat sample is authentic or adulterated with offal can be determined by comparing its spectral image with the pre-established library, to see if there’s a match.

The method improves on existing techniques that are more complicated and time-consuming. For example, a technique known as liquid chromatography works well, but it requires meat samples to be liquefied with solvents before testing, which can take more than an hour.

“The instrumentation for this technique is not that complex,” Hu said. “So, if government or industry wants to do some rapid screening, they don’t need to find highly trained personnel to conduct the experiment.”

All they would need is a spectrometer and user-friendly software that connects to a robust library of spectral images. As more types of meat and offal were analysed and their results stored, the technique would become even more accurate.

The researchers’ ultimate goal is to create an affordable smart device that could be used by consumers at home for the authentication of different food products, much like the pregnancy-test strip.

The study was published Nov. 9 in Scientific Reports. Hu’s co-authors were electrical and computer engineering post-doctoral fellow Liang Zou; food science undergraduate student Xiaolin Huang; and corresponding author Xiaonan Lu, a 2017 UBC Peter Wall Scholar and associate professor in the faculty of land and food systems. The research is supported by the Natural Sciences and Engineering Research Council of Canada and the Peter Wall Institute for Advanced Studies.