There has been a need to develop a more reliable way to detect off-flavours in cocoa, which have previously caused immense economic damage for producers. Now we have one… 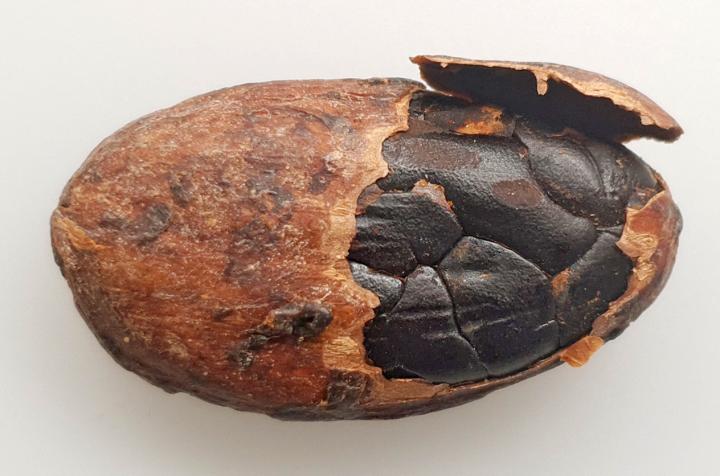 Where the shell has been removed from this cocoa bean, you can see the embryo. Credit: Martin Steinhaus

As one might imagine, cocoa that offers aromas similar to that of horse-dung or mould aren’t desirable nor suitable for chocolate production.

Using a molecular sensory science concept, the odourants responsible for such off-flavours has now been identified by a team of scientists, led by Martin Steinhaus from the Leibniz Institute for Food Systems Biology at the Technical University of Munich.

This work means that the food sector can assess the sensory qualities of fermented cocoa based on odourant concentrations.

Off-flavours have been a major issue for chocolate makers, particularly SME, and inspecting as to whether a line may be impacted has – until now – been limited to a trained sensory panel.  Previously, no approach to objectively evaluate off-flavors in cocoa on the basis of the concentrations of the causative odorants was available.

In cocoa samples with hammy-smoky off-flavors, the team identified six odorants; and in samples with a mouldy-musty odour, the researchers found additional four off-flavour compounds.

The research team then determined the odour threshold values of the identified substances in order to derive maximum concentration limits. For example, the team recommends a maximum tolerable concentration for the off-flavour substance geosmin of 1.6 micrograms per kilogram of fermented cocoa. Even in the lowest concentrations, this odourant has a musty, earthy smell reminiscent of beetroot.

For mothball-like smelling 3-methyl-1H-indole, the researchers’ findings suggest a limit of 1.1 micrograms per kilogram of fermented cocoa.

Interestingly, the results of the study also revealed that between 40 and 65 percent of total geosmin is found in the seed coat (testa) of fermented cocoa beans. While the off-flavour substance 3-methyl-1H-indole was mainly found inside the beans.

“The uneven distribution of the two odourants between the seed coat and the embryo is another important aspect that chocolate manufacturers should consider when testing fermented cocoa,” explained Steinhaus. “At the moment, we do not know how much geosmin is transferred from the shells into the embryo during the roasting process. Therefore, it might be reasonable to remove the seed coats before roasting rather than after roasting.”

Pesticides: why, how and what?

Food for thought: You can’t manage what you can’t measure