Scientists at the University of Tokyo say they have developed cultured beef that mimics the mouthfeel of steak, with a significantly lower risk of microbiological contamination. 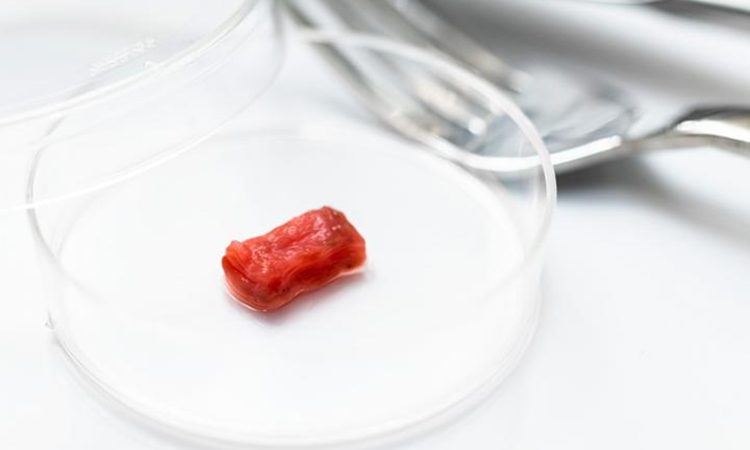 Credit: Institute of Industrial Science, the University of Tokyo

Humans are largely omnivores, and meat in various forms has always featured in the diet of most cultures. However, with the increasing population and pressure on the environment, traditional methods of meeting this fundamental food requirement are likely to fall short. Now, researchers at the University of Tokyo say they have managed to manufacture bovine muscle tissue in the laboratory that may help meet escalating future demands for dietary meat.

Many believe that the livestock industry in its current form is unsustainable. The research team says that from an environmental viewpoint, the land and water costs of modern mega-scale livestock farming are untenable, as are the greenhouse gas emissions and the overall toll on the planet. Additionally, ethical concerns about inhuman exploitation of lower species for food are increasingly being voiced.

To address future requirements, tissue engineering of cultured meat is under development at several centres worldwide – cultured meat recently featured on a restaurant menu for the first time.

However, most biosynthetic meat products are amorphous or granular-like minced meat, lacking the grain and texture of real animal flesh, say the researchers. Mai Furuhashi, lead author, explains their novel process. “Using techniques developed for regenerative medicine, we succeeded in culturing millimetre-sized chunks of meat wherein alignment of the myotubes help mimic the texture and mouthfeel of steak,” she said.

“For this, myoblasts drawn from commercial beef were cultured in hydrogel modules that could be stacked allowing fusion into larger chunks. We determined the optimal scaffolding and electrical stimulation to promote contractility and anatomical alignment of the muscle tissue to best simulate steak meat.”

“Breaking force measurements showed that toughness approached that of natural beef over time. Significantly, microbial contamination was undetectable; this has implications for cleanliness, consumer acceptability and shelf life.”

“Our method paves the way for further development of larger portions of realistic cultured meat that can supplement or replace animal sources,” claimed Shoji Takeuchi, senior and corresponding author.

“However, there is a long way to go before lab-grown meat is indistinguishable from the real thing and hurdles concerning consumer acceptance and cultural sensibilities are overcome.

“Nevertheless, this innovation promises to be a green and ethical alternative to animal slaughter in meeting our need for dietary meat.”

The University of Tokyo

The University of Tokyo