Greenpeace urged the supermarket giant to stop buying meat from companies involved in Amazon deforestation, and Tesco has now called on Government to make deforestation-free food a policy. 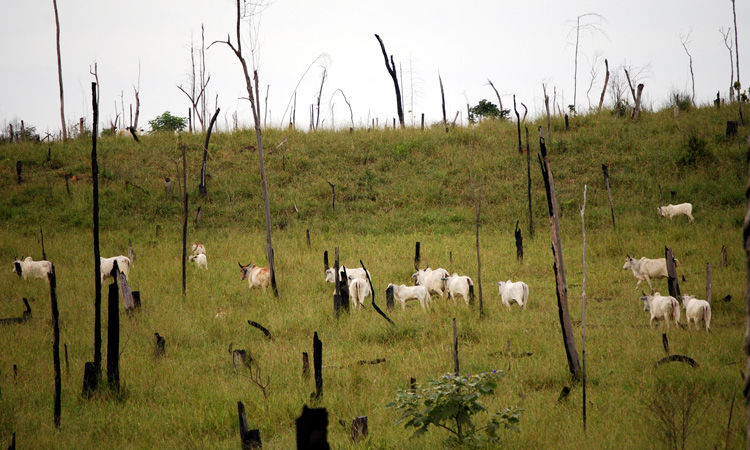 Recently cut and burned rainforest turned into a cattle ranch in the Brazilian Amazon.

Supermarket giant Tesco has announced that it supports the prevention of further Amazon deforestation after Greenpeace launched a campaign against it. The charity called on Tesco to stop buying meat and dairy from companies involved in destroying the Amazon and to halve the amount of meat it sells by 2025 to protect people, wildlife and the climate.

Greenpeace highlighted JBS, one of the world’s largest meat-packing firms, as the prime suspect that Tesco purchases meat from involved with deforestation.

Anna Jones, Head of Forests, Greenpeace UK, said: “The Amazon is perilously close to tipping point. Scientists warn that in fewer than 20 years it could collapse with catastrophic consequences for Indigenous groups, forest wildlife, our health and the climate.

“Tesco’s CEO knows we need to eat less meat and dairy to protect forests and stop climate breakdown. And yet the supermarket sells more of it than any other UK company and continues to buy from suppliers owned by Amazon destroyers.

“Tesco has completely failed to meet its 2020 zero-deforestation pledge and has kicked the can a further five years down the road. Claims that any of the soy in its meat supply chain is ‘deforestation free’ are also hugely misleading, since Tesco merely buys credits to offset soya use without tracing which farms it actually comes from. Unless Tesco commits to significantly reducing meat and dairy sales and drops forest destroyers immediately, vitally important forests will continue to be slashed and burned, and climate change and the risk of future pandemics will only get worse.

In response, a statement by Tesco read: “We have worked alongside Greenpeace on this issue over many years and we are ready to do more directly and as part of a national and industry level solution. We acknowledge that as the UK’s largest retailer, we have a responsibility to lead on this issue and that has driven our actions to date and will continue to do so.

“We stand ready to play our part, and today we call for our government to mandate food companies, as part of its National Food Strategy, to introduce effective due diligence across supply chains to make sure all food sold in the UK is deforestation-free.”

Dave Lewis, Group CEO of Tesco, said: “We all saw the terrible images of the Amazon burning last year. Setting fires to clear land for crops or grazing is destroying precious habitats like the Brazilian rainforest. It must stop. That’s why we support Greenpeace’s aim to prevent further Amazon deforestation. That’s why Tesco does not buy meat from Brazil. It’s why we will hit our target of zero deforestation in our soy animal feed through certification this year. And it’s why we commit to do more, setting tougher targets for 2025.

“Right now, 74 percent of shoppers don’t want supermarkets to remove meat but we recognise the whole country needs to reduce meat and dairy consumption. We will continue to lead with suppliers and through innovation, education and new choices. Our plant-based protein lines increased by 46 percent since last year. Already, 10 percent of Tesco’s chilled ready meals, milk, ice cream and frozen protein ranges are vegan. We are making tangible progress, but we can’t solve this on our own.

“Government needs to act now and on the whole food system, taking into account economic recovery, health, environment and affordability.”