A collaborative study from Cornell University and Washington State University has found that some farmers will have to decide between either low yields or revenue instability as a result of climate change. 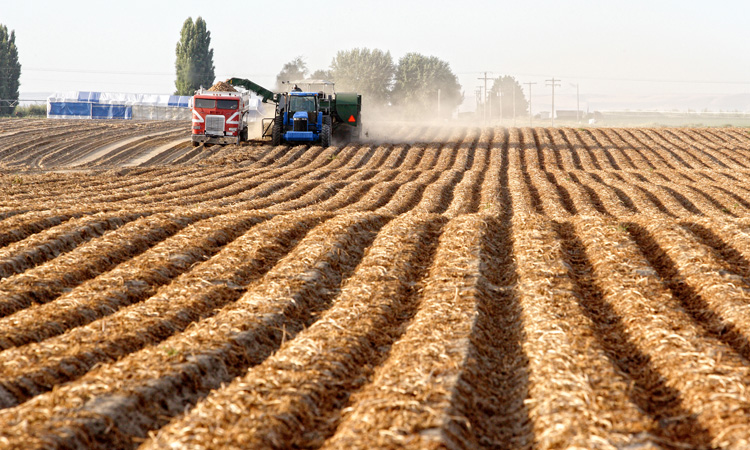 Climate change will leave some farmers with a difficult choice, according to a new study by researchers from Cornell University and Washington State University: risk more revenue volatility, or live with a more predictable decrease in crop yields.

As water shortages and higher temperatures drive down crop yields in regions that depend heavily on seasonal snow, the choice to use more drought-tolerant crop varieties comes at a cost, according to model projections detailed in the paper “Water Rights Shape Crop Yield and Revenue Volatility Tradeoff for Adaptation in Snow Dependent Systems.”

The study examined the Yakima River Basin in Washington, where a complex combination of snow, reservoirs and water rights controls the availability of irrigation water. That water dictates the success of some of the US’ largest producers of wheat, corn, potatoes, pears, cherries, grapes, apples and hops. With proper snowfall and melt, total agricultural productivity in the basin can reach more than $4 billion a year.

The research team sought to quantify climate change’s direct and indirect effects on irrigated agriculture in the basin. Researchers also wanted to know if drought-resistant crop varieties could help recover productivity during times of drought.

In this collaborative study, the group built on prior research at Washington State University that developed a modelling platform connecting crop growth and development, land-surface hydrology and river-system processes. The model simulates dam operations and prioritises the allocation of water among different sectors within the Yakima River Basin.

The team found that higher water stress and temperatures led to lower crop yield, as anticipated, said Keyvan Malek, a postdoctoral researcher in the group and lead author of the study.

“However, the models show that year-to-year variability in expected crop yields goes down because the difference between the best and worst case yields is reduced,” said Malek. “While this is not a positive result, year-to-year fluctuations in crop yield revenue are strongly important in how crop insurance programmes balance revenue fluctuations.”

The team then used its model to explore the potential of new drought-tolerant crop varieties, which are expected to improve annual yields under climate change. The results showed that although those varieties could significantly improve the average yield, farmers could also experience much higher revenue volatility from crop production.

“Typical and best-case annual yields are much higher,” said Jennifer Adam, Berry Distinguished Professor of Engineering at Washington State University and co-author of the study. “But climate change still is likely to cause severe droughts where current water management institutions in the Yakima River Basin simply cannot provide enough water, and there are severe worst-case crop failures.”

The researchers argued that the best outcomes for crop yield and revenue volatility must be through a simultaneous improvement in crop varieties – for example, by preserving agrobiodiversity – and in water systems, such as through improvements in water-governing institutions and infrastructure.

It is important to carefully capture a snow-dependent region’s specific management constraints while being innovative with climate adaptation strategies, the researchers said.

“Otherwise, systems may unintentionally strike the wrong balance as they trade off improving average yields and farmers’ revenue volatility,” said Patrick Reed, Professor of Engineering at Cornell’s School of Civil and Environmental Engineering, and the research group lead.