The survey reportedly found that 86 percent of the tested bacon products contained salt levels equal to or greater than levels found in seawater. 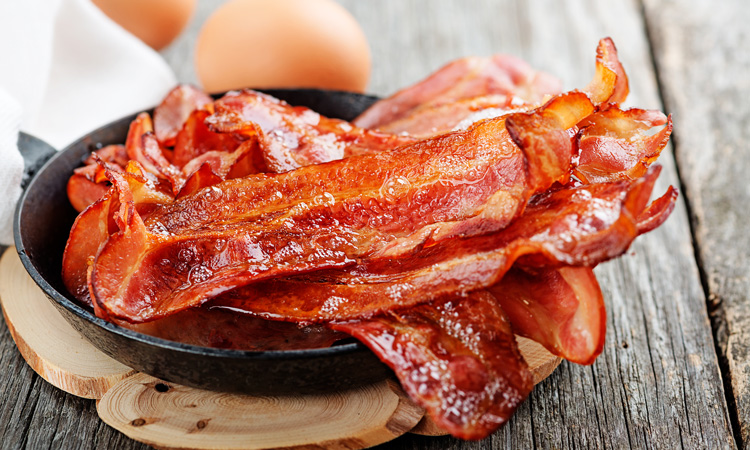 Findings from a new survey1 by Action on Salt have revealed the varying levels of salt found in bacon – the second biggest contributor to salt in the UK diet.2 The survey also suggests that there has been a lack of progress made by the food industry in meeting voluntary salt reduction targets.3

The group is urging the newly formed UK government to reignite a comprehensive salt reduction programme, with mandatory targets for salt levels in products that all companies would be expected to meet, and strict penalties/levies for those who fail to comply.

Given this, Action on Salt has stated that it is “inconceivable that the food industry is feeding consumers with incredibly salty bacon above the salt target set by the Department of Health and Social Care”.

Among the 171 bacon products collected from 10 leading UK supermarket chains, 86 percent have a salt concentration equal to or greater than seawater, the survey found.4

The saltiest bacon offender was reportedly ‘Tesco Finest Unsmoked 8 Wiltshire Cure Back Bacon Medallions’ with 5.3g/100g5, which is said to be more than twice the concentration of seawater.

According to Action on Salt, the survey also shows that bacon can be easily made with less salt. The least salty bacon overall was ‘The Co-operative 8 Reduced Fat Unsmoked Bacon Medallions’ with 1.45g/100g5 of salt.

The group also claimed that there is no consistency on declaration of nutrition information with some companies providing nutritional information for bacon as raw, whilst others declare information as cooked.

“Given the fact that bacon is the biggest contributor to salt after bread in the UK diet, and that we are still far exceeding our daily salt targets, it is shocking to learn that food manufacturers are still ignoring the voluntary salt reduction targets and putting profits before the health of the nation. We have seen great success with the soft drinks industry levy in driving reformulation, and the government must now consider doing the same for key contributors of salt in UK diet, such as bacon,” said Sonia Pombo, Campaign Manager for Action on Salt.

“Whilst Boris Johnson has pledged to spend millions of pounds on building new hospitals – many of which will treat the thousands of people suffering or dying from strokes and heart disease, the Prime Minister must be reminded that just 1g reduction in population salt intake prevents more than 4,000 premature deaths per year in the UK and costs next to nothing to implement,” said Graham MacGregor, Professor of Cardiovascular Medicine at Queen Mary University of London and Chair of Action on Salt.

“For many years, food manufacturers have been allowed to put profits before the health of our nation and we now urgently need Boris Johnson’s ‘no nonsense’ approach to get things done with an ‘oven ready’ mandatory salt reduction programme for all products for 2020. This will save thousands of people suffering and dying unnecessarily, and at the same time, provide huge cost savings to the NHS,” he concluded.

Some companies provide nutrition information ‘as sold’ or ‘as cooked/grilled’ – this impacts the reported salt content as raw figures do not account for water/fat loss on cooking, meaning the salt concentration is less. With this in mind it is difficult to make overall comparisons across companies. We have reported the information as it is provided on the label.

5. Nutrition values differ between products, but also depending on whether the values are for raw or cooked. Raw values do not take into consideration any loss of water or fat, and therefore information on salt per 100g is lower compared to cooked values. Other examples of bacon higher in salt are available, but in this instance for comparison reasons, we have compared products where nutrition information is displayed ‘as sold’.

6. According to our records, up until 2016 Tesco had some form of front of pack label, but now omit this information.