Soft fruit is a staple for many UK consumers, and the British love affair with strawberries and raspberries is particularly prominent. According to Defra, consumption of strawberries and raspberries has risen by 150 percent and 123 percent respectively between 1996 and 2015, supported by perceived health benefits and improved availability. UK soft fruit purchases now account for 22 percent of all consumer fruit purchases, according to primary market researcher Kantar World Panel. Volumes have continued to climb, with the market value of soft fruit grown in the United Kingdom worth £465 million in 2016, according to Defra’s agricultural report, estimated at £670 million in 2018. Yasuf Allinson assesses the current market picture. 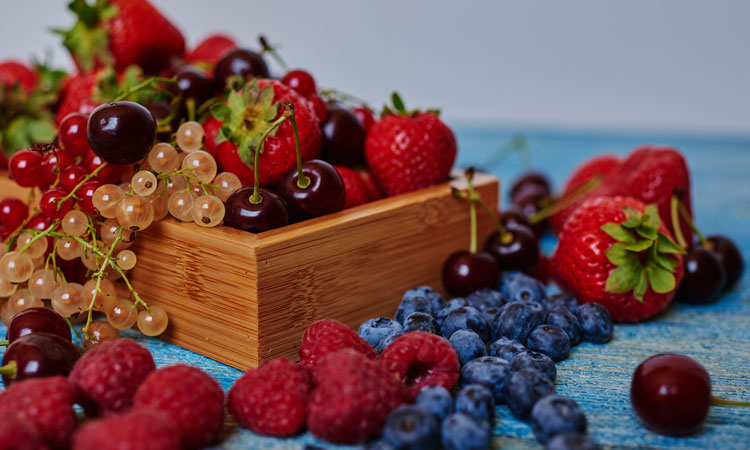 Across the UK, the planted area for soft fruit increased by eight percent between 2014 and 2016, with over 80 percent of strawberries, raspberries and blackberries grown under polytunnels. Although domestic consumption has been healthy, the effects of the EU referendum have posed problems for producers, with a shortage in seasonal labour leading to significant disruption in the 2017 harvest.

Soft fruit consumption takes many forms including smoothies, fruit salads and as ingredients in other products including fresh fruit used to decorate cakes and pastries. The rise in fruit-flavoured ciders has also been a factor in the industry’s expansion. Most raspberries and strawberries are consumed fresh, although sometimes swimming in cream, taking centre court at Wimbledon. Homemade smoothies have become regular in many households, boosting soft-fruit purchases. IBISWorld estimates 13 percent of soft fruit bought for home consumption is used to make smoothies. However, direct consumption still remains at the top of tree.

Away from home, the rise in the number of dedicated juice and smoothie bars in the United Kingdom has contributed to rising soft-fruit consumption, while the popularity of office deliveries and farmers’ markets has also been beneficial. Several online retailers now offer regular office deliveries as employers aim to boost productivity and encourage healthy eating among workers. Aptly named companies such as Fruitful Office offer a range of workplaces a convenient service and are quick to point out the advantages of a healthy workforce, prompting companies to dump doughnuts. This has contributed to rising sales of soft fruit, and, according to Kantar World panel figures, sales of berries in the United Kingdom broke the billion-pound barrier for the first time in 2016. 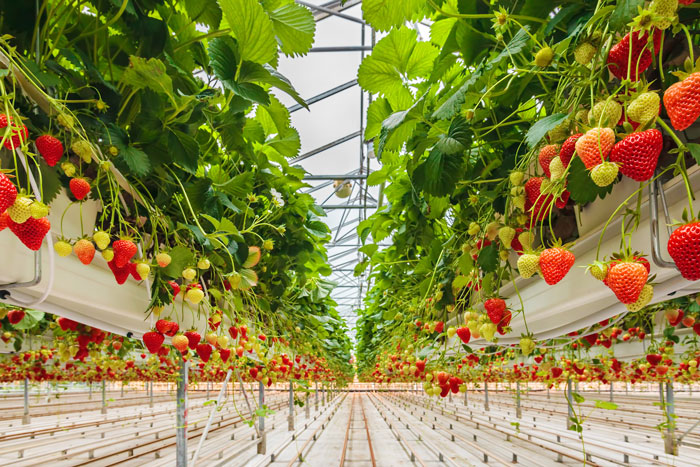 80 percent of strawberries, raspberries and blackberries are estimated to be grown under polytunnels.

The unseasonably warm weather in April stimulated sales in many supermarkets, with Tesco estimating sales of more than two million punnets of strawberries and 1.5 million punnets each of blueberries and raspberries over the week through until 22 April of this year (2018). Similarly, Asda revelled in a berry boost in sales, which propelled strawberries to a podium position among its 15 bestselling fruit and vegetables for 2018.

Supermarkets have responded to changing consumer diets by launching numerous marketing initiatives. According to the British Summer Fruits campaign, supermarkets have latched onto the importance of soft fruits, stocking full shelves and ensuring berries are easily accessible to consumers. This increased in-store prominence resulted in the sales value of soft fruit increasing strongly over the past five years, on occasion surpassing the value of vegetable sales. Cut-throat competition among major supermarkets, particularly with the rise of discounters Aldi and Lidl, has kept prices low for consumers for many years, also aiding demand. This has benefited soft-fruit consumption, as price remains a major determining factor when customers visit retailers – particularly given prevailing consumer uncertainty and pressures on disposable incomes in recent years. 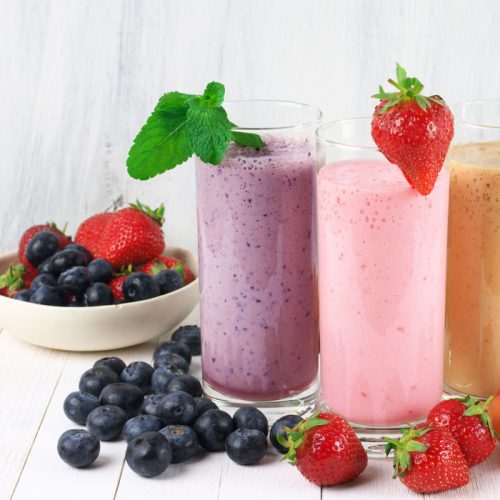 In a bid to maintain a strong position in the market, supermarkets have formed partnerships with growers to provide own-brand soft fruit, with bold labels that state the origin of the produce. British consumers often value the superior taste of locally sourced produce, as the fruit may be picked at the optimal time, ensuring it is fresh and flavourful. This enhances the unique selling point of domestic growers and makes the prevailing consumer focus on provenance particularly important to the soft-fruit industry. In light of this, Tesco, Sainsbury’s, Asda and many more have stocked their shelves with soft fruit punnets labelled as ‘British Grown’ or ‘Best of British’. Despite this increase in production, the industry is still affected by seasonality and import availability, which influences revenue for domestic growers. For example, in April 2018, UK strawberry prices increased due to a supply shortage in Spain, which pushed up wholesale costs by 63 per cent compared with April 2017. Such fluctuations can affect consumer demand.

Concurrent with rising interest in provenance, there has been a rapid rise in demand for organic produce. Indeed, the amount of UK farmland converted to organic production increased 22 per cent in 2016. Organic produce is often sold at premium prices, which has prompted retailers to expand shelf space. Despite recent pressures on household income, many consumers prioritise health, ethical and environmental issues over price, which is expected to keep the industry on an upward trajectory over the current year. Both organic and general soft-fruit consumption has been boosted by the rise of online-only retailers and farmers that sell directly to consumers. Online retailers such as Abel & Cole and Ocado allow customers access to a broad range of seasonal fruit delivered straight to their homes at their convenience, fitting in well with increasingly busy lifestyles. 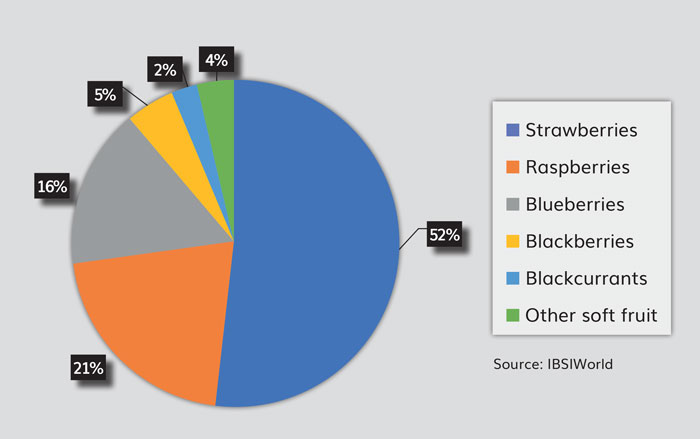 Rising environmental concerns have also led to an increasing media focus on waste and wonky fruit. Soft fruit is particularly prone to wastage, with a recent survey by WRAP, a government advisory body, estimating that one in 10 UK strawberries end up as waste. Some fruit processers, such as Wonky Drinks Ltd, have played a starring role in reducing this, by using misshapen fruit in their juice. These companies can effectively address consumer concerns over wastage in the food sector and the importance of sustainable, domestic production.

UK growers have responded accordingly by increasing land area dedicated to growing soft fruit, which has grown by 30 percent over the past decade, according to Defra. Polytunnel growing is a key aspect of the British soft-fruit-growing industry; protecting crops, reducing the use of pesticides and extending the growing season. Development in polytunnel construction allows for near ambient temperature, improved ventilation and, often, better-quality plants. Climate-controlled glasshouses, which are more expensive, have proved even more successful at bringing forward harvest times and extending growing seasons, while different varieties of strawberry, such as ‘everbearing’ cultivars, can help provide fruitful harvests throughout the year. The current year saw the earliest-ever British strawberries, when fruit from Springfield Nursery in South Wales went on sale in Tesco and Aldi on 26 February 2018.

Brexit has planted a few problem seeds for many growers. The weakness of the pound since the vote has gradually discouraged many seasonal workers from coming to the United Kingdom, as has the effects of an improving European economy and the perception that EU migrants are unwelcome. IBISWorld estimates that the average seasonal labourer from the European Union earned €412.82 per week prior to EU referendum. In the following year, seasonal workers earned 13.6 per cent less in Euro terms for the same hours, despite improvements in the national minimum wage. This contributed to almost a third of vacancies that were left unfilled during the crucial harvest month of September in 2017, according to the National Farmers Union (NFU).

Due to the delicate nature of strawberries and raspberries, harvesting remains a labour-intensive process. According to British Summer Fruits, 31,000 seasonal workers are required during the annual harvest of soft fruit in the summer. Labour shortages were therefore highly detrimental to the crop, with Haygrove farms and G’s growers, a producer organisation, reporting that many of their members were faced with strawberries rotting in fields across the country. This prompted the National Farmers Union (NFU) to call for the re-introduction of the Seasonal Agricultural Workers Scheme, which ceased in 2013, as many growers grumbled about the disruption to their harvests in 2017. In addition to the direct effect of labour shortages, many farms are finding it difficult to plan for the 2018 harvest due to lack of clarity regarding UK-EU immigration policies. It remains uncertain if the government will reintroduce the Seasonal Agricultural Workers Scheme, but an expected shortage of labour, and consequently a rise in wages, is likely to lead to higher soft-fruit prices.

Increased capital investment, however, does hint at a solution to the problems posed by Brexit. The development of glasshouses and more sophisticated polytunnels has already facilitated increased production, and productivity could, in the near future, be further increased by the utilisation of automated picking systems. Innovate UK funds a number of relevant start-ups, with Dogtooth Technologies, a Cambridge-based firm, currently pilot testing a number of strawberry-picking robots. Such developments could lead to a significant reduction in the industry’s reliance on labour. Ultimately, however, the consumer outlook for the soft fruit industry remains strong, continuing its ascent within the wider fruit and vegetable sector. With consumers finding numerous ways to enjoy the fruits of farmers’ labour and supermarkets emphasising domestic provenance and sustainability, British producers are well placed to benefit from strong domestic demand for soft fruit, estimated to be worth over £1.6 billion in 2018.­­­­­­­­­­­­­­­­­

Yusuf Allinson is an Industry Analyst at London-based market research firm IBISWorld, having previously achieved an Economics BSc at Royal Holloway. He specialises in the trends influencing the comprehensive UK agricultural sector. 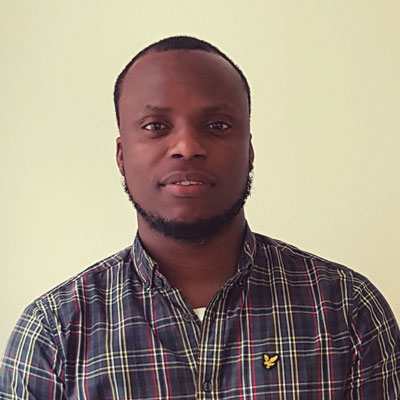