The rising trend of mycoprotein as a food ingredient is here to stay. In this article, Paulo Teixeira reviews how we got where we are, why we should prepare to see more of this fungal protein ingredient, and why that’s a great thing! Although the concept of food is as old as humans themselves, it is also increasingly regarded as a crucial technological field for our development. As in most other fields, food has in recent years experienced rapid innovation, quick product adoption cycles, and an extensive search for differentiation in a growing competitive market, and this has been particularly true in the areas of alternative proteins and the plant-based sector.

When looking at the plant-based sector and the focus on replacing meat with more sustainable and ethical options, the path was marked with the emergence of texturised soy and wheat (gluten) proteins through extrusion processes.

Although these products were a good start, the industry found it challenging to please customers when working with the inherent sensory properties of these proteins; ie, unwanted off-taste and flavour notes and defined textures that do not suit every product demanded by the market.

Subsequent developments saw the rise of other plant protein sources such as pea protein, and methods giving more meat-like textures such as high-moisture extrusion (HME), into the mainstream market and industry. Despite definite progress, the old challenges remain to some extent, and the quest continues for better products, sources and methods.

While the plant sector has bloomed, another protein source has been brewing on the side; a search beyond plants and animals into the third kingdom of life: fungi, the industry technical term for which is ‘mycoprotein’.

Until about 10 years ago, the answer to this question would inevitably mention one brand name: Quorn. The research behind this UK brand started in the 1960s by looking into thousands of different fungi present in, for example, soils, and finding a species that could grow into a nutritious, cheap and fast‑to‑produce food source. By making food products from this fungi, the company became the most consumed vegetarian brand in the UK. 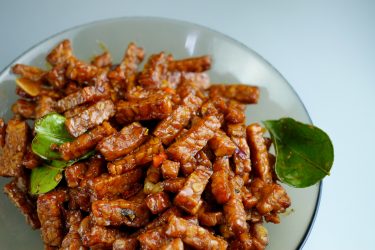 Traditional examples of fungal mycelia in food include tempeh

Mycoprotein refers literally to ‘protein from fungi’, as the etymology of the word ‘myco’ refers to the Greek work mýkēs, meaning ‘mushroom, fungus’. The term is somewhat misleading, however, as it implies a process of extracting and concentrating a protein from a fungal organism, as we do with plant proteins.

In truth, there is no extraction process in mycoprotein production, and the word refers instead to the whole fungal organism, in technical terms the ‘mycelium’, which is as high in protein as most protein concentrates, with a protein content of 45-70 percent on dry matter.

You might consider eating fungi mycelia as something exotic, but it actually isn’t. Traditional examples of fungal mycelia in food include tempeh, a traditional Indonesian food where soybeans are fermented with fungi that create a mycelium structure around the beans, forming essentially a mycelium block. Other common foods are cheeses such as brie, where a white fungus grows on the outer layer of the cheese and creates a mycelium crust.

As for mycoprotein, there are different ways to produce it industrially – one of the most common is through liquid fermentation. In this method, a fermentation vessel (bioreactor) is used in a process that looks similar to brewing beer, but with advanced techniques. Here, fungi are grown at exponential rates using a mix of liquid nutrients, in a process fast enough that a whole industrial bioreactor can be fully grown and ready to harvest in 24 hours.

Why is mycoprotein such a great solution for the food industry?

Today’s alternative protein sector is simultaneously pushing three different boundaries to keep ahead of competition: making products with great texture and taste that can compete with meat, delivering new food experiences to their customers, and doing both of these things in a price-competitive way.
Improving taste in plant-based protein products is often an uphill battle due to the need to mask flavour off-notes from these proteins and formulate against these effects. The textures delivered by these proteins can certainly perform in some applications, but are not appropriate for others, such as fish and seafood applications. While some protein sources can deliver better results for the aforementioned criteria, they cannot do so in a price-competitive way, or in the volumes needed.

One of the possibly most effective ways to overcome the challenges from plant-based proteins is simply to not use plants. Fungi, in this context mycoprotein, can deliver uniquely neutral taste profiles compared to plant-based proteins due to its cellular structure integrity. The textures obtained from different fungal mycelia and production techniques also cater to the variety of textures in demand within the food industry.

Furthermore, due to the scalability of fermentation processes and efficient growth of fungal organisms, the cost efficiency of this process benefits tremendously with technology scaling and development, and can offer real price competitiveness with the meat industry in the long run.
Considering its potential to impact global food systems, we’re talking about a whole food system where efficient carbohydrate-producing crops can be grown and then converted to protein via fungi fermentation. With this route, mycoprotein production offers an alternative protein production system with reduced CO2e (carbon dioxide equivalent) emissions, as well as drastically lower land and water use per kilogram of product.

Furthermore, this is not tied to geographical location or weather conditions, as the nutrient inputs for fungal growth can come from a variety of different crops depending on what is locally produced.

The Big Bang of a new protein source

Thus far, mycoprotein has been a small subset of plant-based protein sources, with estimated volumes accounting for less than five percent of the world’s alternative protein production.1,2 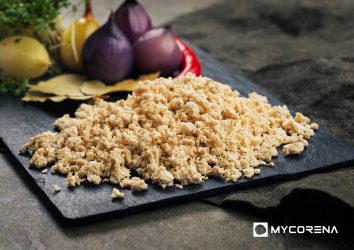 Confined to being produced by one company under a single consumer brand, its production has been centralised and its reach limited to a few geographies. However, in recent years the number of new and existing companies focused on producing, selling and working to commercialise mycoprotein products has risen exponentially, with a large majority of plant-based manufacturers already considering the inclusion of mycoprotein products in their portfolio. This has been aided by the founding of companies such as Mycorena3 whose focus is on the supply of mycoprotein as an easy-to-use ingredient for food manufacturers, expanding mycoprotein presence to major mainstream brands in widely different global markets.

This emergence period also coincides with the expiring dates of most of Quorn’s patents around the technology of mycoprotein production, facilitating an expanded market with a variety of solutions and providers, not unlike the desktop 3D printing phenomenon we’ve seen in the last decade. According to projected production volumes by the emerging market players, mycoprotein presence could escalate more than five-fold in this decade, accounting for a considerable chunk of the whole plant-based protein market.

Entering the market also are unique mycoprotein-based products that use novel production techniques to achieve unique properties, opening doors to novel products within the alternative protein market. The range of products to which this technology is being applied is even expanding beyond protein and meat replacements, entering the realms of animal fat replacement4 and dairy replacement products.

It could be possible to achieve something we haven’t yet seen in the food industry, especially within the plant-based protein sector: the emergence of a fully decentralised, robust, highly sustainable protein production system. A system where a variety of crops from different geographical locations can be used as inputs, the mycoprotein production process can be carried by a variety of different manufacturers with facilities spread throughout the globe (having either the same type or different outputs, as desired), and the resulting ingredient can be used by a multitude of different food brands for a variety of products. Such a system affords the capability to deliver a high level of food security and stable growth prospects for the system as a whole, without being dependent on a single player, location or condition.

Mycoprotein seems to be a solution that the industry both wants and needs, and its promises of positive impact in the global food system are obvious.

Paulo Teixeira is the Chief Innovation Officer at Mycorena, leading R&D and innovation projects within the company. He holds a PhD in Bioengineering with an expertise in precision and biomass fermentation technologies, with a focus in food applications. 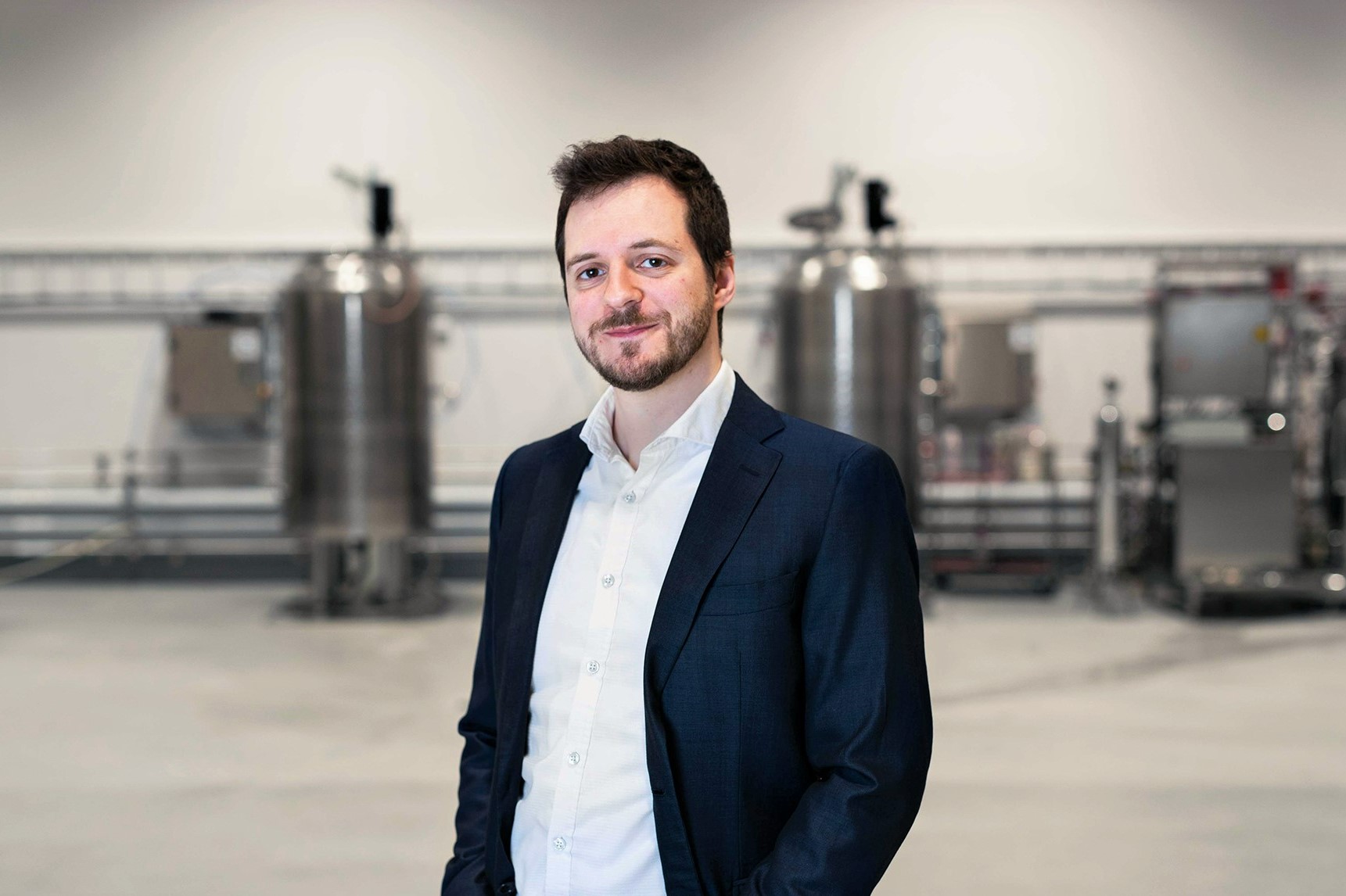