Mussels in UK supermarkets contain microplastics and other debris

For every 100g of mussels consumed, it is estimated there are approximately 70 pieces of microplastics, new research has found. 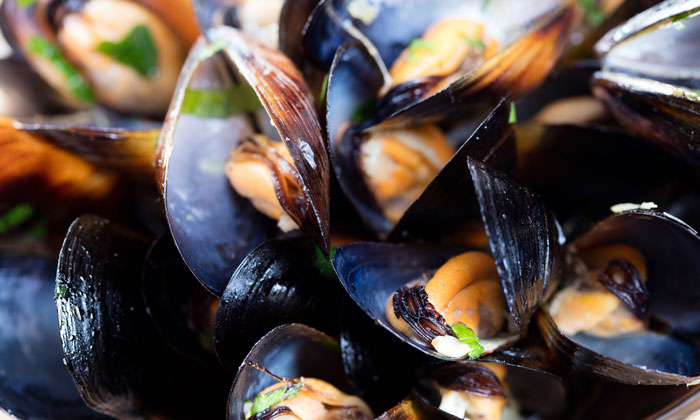 FILTER FEEDER: Mussels can be good indicators of what is floating round in our seas. Last month, mussels sampled from Puget Sound in the U.S. tested positive for opioids

Microplastics and other debris have been found in 100 per cent of mussels sampled from around the UK coast and those bought in supermarkets, leading researchers to call for further study of health implications for humans.

Scientists from the University of Hull and Brunel University London collected samples from eight locations around the UK’s coastline between November 2016 and February 2017 as well as from eight unnamed supermarkets, representing eight different, unnamed brands.

The findings have been published in the journal Environmental Pollution.

Professor Jeanette Rotchell, of the School of Environmental Sciences, University of Hull, said: “It is becoming increasingly evident that global contamination of the marine environment by microplastic is impacting wildlife and its entry into the food chain is providing a pathway for the waste that we dispose of to be returned to us through our diet. This study provides further evidence of this route of exposure and we now need to understand the possible implications of digesting these very small levels. Continued research will hopefully drive effective human risk assessment.

“Chances are that these have no implications, but none the less, there is not enough data out there to say there is no risk. We still need to do the studies and show that is the case.

“There are currently regulation of some contaminants in food, in the long term, regulatory solutions to this problem will also be needed.”

Dr Alan Reynolds, Deputy Director, Experimental Techniques Centre, Brunel University London, said: “Blue Planet has rightly awoken the public to the devastating effects waste plastics are having on the marine environment.  This paper highlights that the problems are close to home in finding that these same polluting microplastics are now coming back to us in the food in our supermarkets.”

An estimated 8 million tonnes of plastic waste enter the oceans each year, with significant environmental cost. Plastics are being consumed by marine organisms that mistake the waste for food

Mussels feed by filtering seawater through their bodies, ingesting particles such as microplastics and other debris as well as their food.

Professor Rotchell pointed out it is not just microplastics which need to come under the microscope.

Of the debris found in mussels, the study showed around 50 per cent was made up of microplastics and 37 per cent from other debris including textiles such as rayon and cotton.

She said: “All the conversation is about microplastics, but textiles could also be worth investigation.”

Previous research led by Dr Cath Waller at the University of Hull, along with colleagues at the British Antarctic Survey, has shown how the levels of microplastic particles accumulating in the Southern Ocean, around Antarctica, are much worse than expected.