The study comes amidst debate over post-Brexit trade agreements and the possibility of countries insisting the UK import their chlorine-treated foodstuffs. 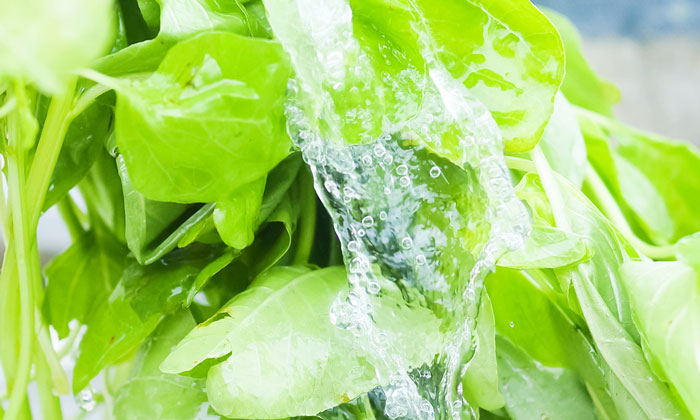 CLEAN AND FRESH?: In its study, the team incubated Listeria monocytogenes and Salmonella enterica populations on spinach leaves and then subjected the spinach to chlorine washes

Chlorine, commonly used in the agriculture industry to decontaminate fresh produce, can make foodborne pathogens undetectable according to new research led by the University of Southampton.

The study, titled ‘Viable but nonculturable Listeria monocytogenes and Salmonella enterica Thompson induced by chlorine stress remain infectious’ has been published in mBio, the lead journal for the American Society for Microbiology.

Foodborne disease presents a consistent but frequently preventable threat to public health, and is responsible for an estimated 2.2 million deaths worldwide annually. In the UK, it is estimated that each year one million people suffer a foodborne illness, resulting in 500 deaths.

The research team’s findings may help explain outbreaks of Salmonella enterica and Listeria monocytogenes among produce in recent years.

As a consequence of the research one of the collaborators, Vitacress Salads, has become the first UK company to obtain supermarket approval to sell fresh produce washed in spring water without chlorine.

“This important work is a major breakthrough, after 100 years of relying on chlorine to sanitise foods and drinking water, and may explain the many unrecognised or untraceable disease outbreaks relying on the gold standard of culture recovery,” said lead author Professor Bill Keevil, Head of the Microbiology Group at the University of Southampton.

“The problem with fresh produce, such as lettuce and spinach, is that many people eat it fresh, so it misses the cooking step which would kill most pathogens, one reason why companies have relied on chlorine washing before sale.

“It will likely impact on post-Brexit trade agreements with countries insisting the UK import their chlorine-treated foodstuffs which this new work shows may not actually be safe because the sanitisation does not kill any bacterial pathogens present that are still capable of causing disease. One example is chlorine treated chicken carcasses.”

In response to stress such as extreme temperatures, nutrient starvation, or significant dryness, some Gram-positive bacteria can form tough spores and survive for thousands of years in the environment. Bacillus anthracis, which causes Anthrax, is one example.

Many bacteria, however, cannot form spores and instead survive a stress by entering a viable but nonculturable (VBNC) state in response to environmental stresses.

In its study, the team incubated Listeria monocytogenes and Salmonella enterica populations on spinach leaves and then subjected the spinach to chlorine washes. The viable Listeria and Salmonella populations became VBNC by 50 and 100 parts per million (PPM) chlorine, respectively. Further experiments revealed that roundworms that ingested VBNC cells had shortened lifespans.

“Chlorine induces the VBNC state in foodborne pathogens Listeria monocytogenes and Salmonella enterica and chlorine was ineffective at killing total populations of these pathogens. The data shows that VBNC foodborne pathogens can both be generated and avoid detection by industrial practices, while potentially retaining their ability to cause disease.”

Dr Steve Rothwell from Vitacress Salads added: “Some years ago Vitacress recognised real consumer concerns regards the use of dilute chlorinated water in the preparation of ready to eat salads.

“Through working with the University of Southampton the company was able to validate a first to market ‘spring water wash’. Instead of using chlorinated water to try to kill bacteria that might be present on salad leaves this natural process works by simply detaching them and flushing to waste.

“This latest publication further validates our adoption of an environment and consumer friendly wash process, suggesting that whilst chlorine washed salads may sometimes yield lower microbial counts, the chlorine could simply be hiding potential problems that we would see and address.”