Scientists hope to use data from the invisible light bounced back by crops to monitor the photosynthetic efficiency of any field across the world to evaluate crop conditions and forecast crop yields on a global scale in real time. 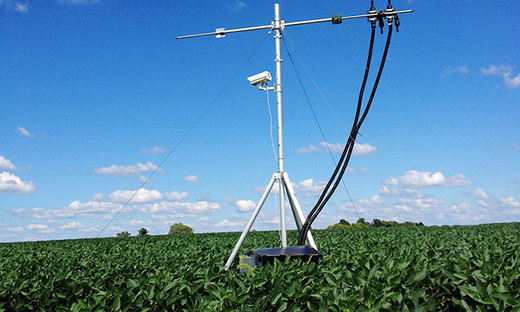 This light can reveal the plants’ photosynthetic performance throughout the growing season, according to newly published research by the University of Illinois.

“Photosynthetic performance is a key trait to monitor as it directly translates to yield potential,” said Kaiyu Guan, an Assistant Professor in the Department of Natural Resources and Environmental Sciences at U of I and the principal investigator of this research. “This method enables us to rapidly and nondestructively monitor how well plants perform in various conditions like never before.”

The Illinois team led by Guofang Miao, a Postdoctoral Researcher in NRES and the lead author of the paper, reports on the first continuous field season to use sun-induced fluorescence (SIF) data to determine how soybeans respond to fluctuating light levels and environmental stresses.

“Since the recent discovery of using satellite SIF signals to measure photosynthesis, scientists have been exploring the potential to apply SIF technology to better agricultural ecosystems,” said study collaborator Carl Bernacchi, an Associate Professor of plant science at the Carl R. Woese Institute for Genomic Biology (IGB). “This research advances our understanding of crop physiology and SIF at a local scale, which will pave the way for satellite observations to monitor plant health and yields over vast areas of cropland.”

Researchers captured this process using hyperspectral sensors to detect fluctuations in photosynthesis over the growing season. They designed this continuous study to better understand the relationship between absorbed light, emitted fluorescent light, and the rate of photosynthesis. “We want to find out whether this proportional relationship is consistent across various ecosystems, especially between crops and wild ecosystems such as forests and savannas,” said Miao.

“We are also testing the applicability of this technology for crop phenotyping to link key traits with their underlying genes,” said co-author Katherine Meacham, a postdoctoral researcher at the IGB.

“SIF technology can help us transform phenotyping from a manual endeavor requiring large teams of researchers and expensive equipment to an efficient, automated process,” said co-author Caitlin Moore, also a Postdoctoral Researcher at the IGB.

A network of SIF sensors has been deployed across the U.S. to evaluate croplands and other natural ecosystems. Guan’s lab has launched two other long-term SIF systems in Nebraska to compare rainfed and irrigated fields in corn-soybean rotations.

“By applying this technology to different regions, we can ensure the efficacy of this tool in countless growing conditions for a myriad of plants,” said Xi Yang, an Assistant Professor at the University of Virginia, who designed this study’s SIF monitoring system.

“Our ability to link SIF data at the leaf, canopy, and regional scales will facilitate the improvement of models that forecast crop yields,” Guan said. “Our ultimate goal is to monitor the photosynthetic efficiency of any field across the world to evaluate crop conditions and forecast crop yields on a global scale in real time.”

This work was supported by the NASA New Investigator Award, the Institute for Sustainability, Energy, and Environment (iSEE), a NASA Interdisciplinary Science Award and the TERRA-MEPP (Mobile Energy-Crop Phenotyping Platform) research project that is funded by the Advanced Research Projects Agency-Energy (ARPA-E).

TERRA-MEPP (Mobile Energy-Crop Phenotyping Platform) is a research project that is developing a low-cost phenotyping robot to identify top-performing crops. TERRA-MEPP is led by the University of Illinois in partnership with Cornell University and SignetronInc. and is supported by the Advanced Research Projects Agency-Energy (ARPA-E).