Extra Virgin Olive Oil (EVOO), being an important source of antioxidants and healthy fats, is an economically important product of Mediterranean countries. Since EVOOs can only be produced during a limited period of time annually, in order to maintain its commercial availability throughout the year packaging materials such as glass, plastic and metals are used. The transparency of the glass and plastic materials exposes the oil to the natural light conditions leading to photosensitised oxidation. The oxidation of oils results in loss of minor chemical components that are responsible for sensory and nutritional quality. 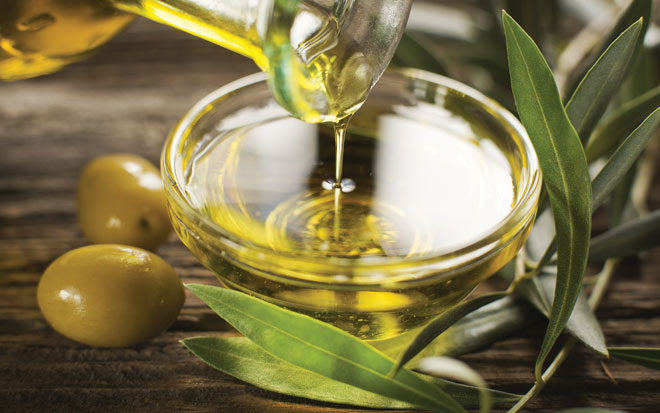 The oxidative stability of EVOOs during storage is of high importance to prevent the formation of off-flavour compounds leading to its overall quality deterioration. To maintain the quality of EVOOs it is important to monitor the changes occurring during its storage and processing conditions. However, the monitoring of EVOOs’ quality is a complex analytical challenge due to the presence of complex mixtures of biochemical compounds such as triacylglycerol, partial glycerides, hydrocarbons, tocopherols, pigments, sterols, alcohols, triterpene acids, volatile compounds, phenolic compounds, phospholipids and proteins1. Typically, the oxidation of EVOOs leads to the formation of primary oxidation products such as hydroperoxides, which, further decompose to secondary oxidation products like aldehydes, alcohols and ketones2. These latter formed compounds are responsible for the characteristic ‘off-flavour’ of degraded oils. Previous work carried out with fluorescence spectroscopy proved it to be a cheap, quick, noninvasive tool to deal with quality monitoring of olive oils3,4. In fluorescence spectroscopy, by excitation with ultraviolet or visible light, the fluorescent molecule of interest is promoted to one of the several vibrational levels. Afterward, the molecule returns back to the ground state emitting fluorescence light at higher wavelengths than the excitation light. These emitted lights at particular wavebands correspond to biochemical equivalents and, therefore, allows the non-invasive monitoring of EVOOs.

In the present work, fluorescence spectroscopy was used to monitor the changes occurring in the EVOOs when exposed to light and when stored in dark conditions. Typically, when the EVOOs are exposed to light conditions, they undergo accelerated oxidation. This oxidation results in production of new biochemicals in the oil, which typically have characteristic fluorescence spectral signatures. Therefore, it was decided to identify different regions from the changes in the fluorescence spectra. The identified changes in the spectra were later used to explain the change in quality of EVOOs. Obtained results showed that the exposure of oils to light resulted in a rapid degradation of quality, whereas the oils that were stored in dark conditions showed minimal change in quality. Furthermore, in a fast and non-destructive manner, the fluorescence spectroscopy provided successful monitoring of the biochemical changes occurring in the EVOOs during storage time.

A commercial EVOO sample of the variety Picual obtained from Casas de Hualdo, a manufacturer from Spain, was used as a sample in this study. The sample was further divided into two equal samples for the experiments related to dark and exposed light conditions. The measurements were performed with a right-angle fluorescence spectroscopy setup connected to a multi-channel spectrophotometer. A UV-VIS deuterium lamp (200-400nm) was used for exciting the fluorophores present in the EVOOs. During every experimentation day the samples were taken from the corresponding bottles and spectra were recorded. The bottles were sealed after every sampling and the cuvettes used for sample presentation were cleaned after every measurement. The recordings for a period of seven months (June to December) resulted in a total of 2×7 = 14 spectra.

Before any data interpretation and analysis, it was decided to reduce the spectral range of fluorescence spectra to 400-800nm for all the recorded spectra. Furthermore, to reduce the random noise in the selected spectral range, Savitzky–Golay smoothing was performed5. After the smoothing, the emission spectra provided a very high intensity peak near 671nm for the presence of chlorophyll. This high-intensity peak overlay the interpretation of other low-intensity local peaks arising due to the presence of other fluorophores (such as the oxidation products). Therefore, for better interpretation, each emission spectrum was normalised independently by dividing by the sum of its emission intensities recorded for complete wave-length range, and furthermore, expressed as its percentage. To show the progressive development of oxidation products in the EVOO with a corresponding decrease in amount of chlorophyll, the ratio of sum of peaks identified in the region of 400-570nm and the peaks corresponding to chlorophyll (671nm) was used. Furthermore, the ratio was used to explain the evolution of the EVOO during storage and for different light conditions.

Figure 1 (below) presents the spectra of the EVOOs placed in dark (a), and exposed to light conditions (b). The spectra of different months can be identified with different colour markers. At first glance, it can be easily seen that the oil placed in dark shows very little change in the spectra of the oil during the storage. A noticeable change can only be observed as a decrease at 671nm, which is biochemically equivalent to the decrease of chlorophyll pigments. However, the change is very minute compared to that of the oil exposed to light. A major reason for the slight change in the spectra of oil stored in dark conditions could be understood as the result of auto-oxidation. The auto-oxidation results from the presence of minor chemical constituents such as free fatty acid, metals, phospholipids, thermally oxidised compounds and antioxidants.

From Figure 1(b) it can be seen that the spectra of oil placed under exposed light conditions changed considerably with the storage time. It can be noticed that the intensity of the peaks above 650nm decreases and the intensity of the range below 650nm increases. This evolution could be ascribed to the photo-oxidation of the EVOO in which the chlorophyll acts as a photosensitiser. The photo-oxidation led to the formation of primary and secondary oxidation products, thus producing the overall quality degradation of oils.

Figure 2: The standard deviations obtained from the spectra of EVOOs placed in
dark (blue) and exposure to light conditions (red)

Figure 3 presents the evolution of oils placed in dark conditions (red) and exposed to light (blue) conditions. The evolution is presented as the ratio of the sum of the peaks related to oxidation products (identified between 400-570nm) in fluorescence spectra to that of the peaks corresponding to chlorophyll (671nm). In figure 3 it can be seen that for the oil placed in light conditions (blue line) the ratio is increasing with storage time, however, for the oil placed in dark conditions (red line) the ratio is almost constant. The change in ratio explains the development of oxidation products with respect to the decrease of chlorophyll content due to photo-oxidation. A higher ratio indicates a high amount of oxidation products and less amount of chlorophyll. It can also be noticed from figure 3 that the change in ratio values of the oils exposed to light was the highest during the first month and later the changes were less. A reason for this was the relative decrease in the chlorophyll pigment with storage time. Typically, the chlorophyll pigment acts as a photosensitiser and causes accelerated oxidation of oils. However, in this work no chemical analysis was performed to estimate the real changes in the concentration of chlorophyll during the storage period.

Figure 3: Evolution of oils stored in dark (red) and in exposed to light conditions
(blue). The evolution is presented as the ratio of the sum of the peaks identified in
the region of oxidation products (from 400-570nm) in fluorescence spectra to
that of the peaks corresponding to chlorophyll (670nm)

The oxidative stability of EVOOs is the major factor determining its quality. However, the oils undergo auto-oxidation due to the presence of minor chemical compounds, and an accelerated oxidation when exposed to light. To maintain the quality of oils it is imperative to control and prevent the exposure of oils to light during both the processing and storage stages.

Puneet Mishra is presently a Marie Curie Early Stage Researcher at Centre for Process Analytics and Control Technology (CPACT), Glasgow, United Kingdom. Before joining CPACT he was working as a researcher for iMinds Vision Lab at Department of Physics, University of Antwerp, Belgium. He obtained his masters in agro-engineering in June 2015 from Universidad Politecnica de Madrid (UPM), Spain. During his master studies he was a visiting student to IRSTEA in Montpellier, AgroParisTech in Paris and King Abdullah University (KAUST) in Saudi Arabia. His research interests include spectroscopy, machine learning, artificial vision and process analytical technologies.

Lourdes Lleó García obtained her PhD in Agricultural Engineering from Technical University of Madrid (UPM, Spain) in 1999. Presently she is an Assistant Professor at UPM and member of the research group Physical Properties Laboratory and Advanced Technologies in Agrofood (LPF-TAGRALIA). Her research interests include application of optical sensors for safety and quality of food, applying techniques such as multispectral-hyperspectral imaging, spectroscopy UV/VIS/NIR and chemometrics analysis tools.

Natalia Hernández-Sánchez obtained her PhD in Agricultural Engineering from Technical University of Madrid in 2006. Presently she is an Assistant Professor at UPM and member of the research group, Physical Properties Laboratory and Advanced Technologies in Agrofood (LPF-TAGRALIA). Her research interest includes evaluation of food quality and safety using techniques such as Nuclear Magnetic Resonance, X-Rays, UV-VIS-NIR and Fluorescence Spectroscopy; and application of chemometric techniques to data analysis.

Margarita Ruiz-Altisent obtained her PhD from Technical University of Madrid (UPM) and is presently a Professor at UPM. She is also senior researcher and founder of Laboratory for Physical Properties and Advance Technologies in Agrofood (LPF-TAGRALIA) at UPM. Her research interests include post-harvest technology, biological product mechanics, non-destructive sensors for product characterisation and quality, infrared techniques, and imaging spectroscopy.