Rare and potentially deadly bacteria found in US milk

For the second time in three months, the Centers for Disease Control and Prevention (CDC) is warning Americans who might have consumed contaminated raw milk and milk products in the last six months to visit their doctor. 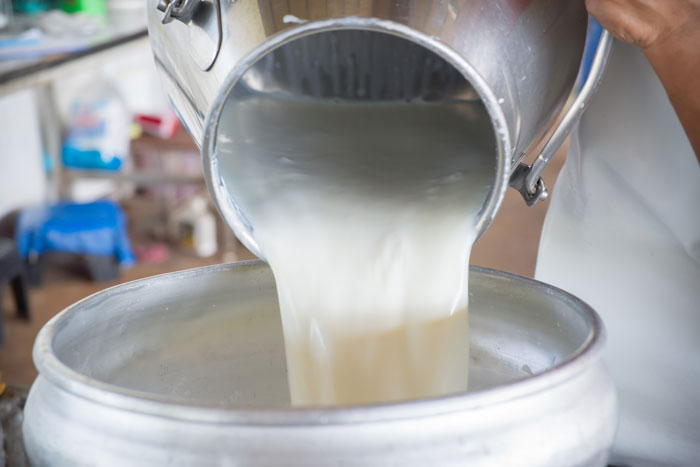 RAW AND RISKY: The sale of raw, or unpasteurised, milk is illegal is some countries

A public health scare has been triggered after a woman was infected with a potentially deadly bacteria from drinking raw milk.

Now the CDC have warned anyone who drank the product from a company called Udder Milk that they may too have been infected with the bacteria Brucella abortus RB51.

While Brucella can cause anyone to become sick, women may suffer miscarriage and other pregnancy complications making it critical for pregnant women who may have consumed the raw milk from Udder Milk to seek medical care immediately.

In late September, a New Jersey woman became ill after drinking raw milk from the company. CDC confirmed her illness was Brucella RB51 in late October. Because Udder Milk has not provided information about the farms that supply their milk, it has not been possible to trace the source of the woman’s infection. CDC scientists have been collaborating with state health officials on the investigation. The U.S. Department of Agriculture and the U.S. Food and Drug Administration are working with state health and agriculture officials to trace the source of the contaminated products.

Until more information is available about which farms may be supplying contaminated milk or until officials can test milk from the farms, CDC recommends that anyone who products from the company in the past six months visit their doctor for antibiotics to prevent illness. Information suggests that the company delivers in Connecticut, New Jersey, New York and Rhode Island.

“Because health officials  have no direct way to let people know they may have drunk contaminated milk, everyone who consumed milk from Udder Milk in the past 6 months should receive antibiotics now to avoid having long-term health effects from the bacteria,” said William Bower, M.D., team lead for the CDC group that investigates brucellosis, the illness caused by RB51.

The New Jersey patient is the second known domestically acquired illness caused by Brucella RB51 in raw milk in the United States this year; the other was in Texas in July. The Texas and New Jersey incidents are not connected.

The locations of the farms supplying Udder Milk are not known. Neither are the places where the company sells and distributes. Online information about the company points to members-only websites through which people purchase raw milk online and delivery sites that shift to avoid detection by public health officials. Selling and distributing raw milk and raw dairy products is illegal in New Jersey and selling it outside of the farm that produces it is illegal in New York. Farms that sell raw milk in New York also must have a permit to sell it.

The CDC have advised anyone who consumed the company’s products to seek medical care and start on antibiotics to prevent future chronic disease from RB51. The Brucella RB51 strain is resistant to some antibiotics that would normally be used to prevent or treat brucellosis.

The symptoms include muscle pain, lasting fatigue, arthritis, depression, and swelling of the testicles. Untreated Brucella RB51 infection can result in long-term health problems like arthritis; heart problems; enlargement of the spleen or liver; and, in rare cases, nervous system problems like meningitis. RB51 can cause severe illness in people with weakened immune systems and miscarriages in pregnant women.

RB51 is a weakened strain of Brucella abortus bacteria used to vaccinate young female cattle. Intensive vaccination campaigns have nearly eradicated B. abortus, which can cause abortions in cattle. The bovine vaccine reduces the risk of people contracting brucellosis from infected cows. However, in rare cases, vaccinated cows can shed RB51 in their milk. The only way to avoid this potential exposure to RB51 is to drink pasteurised milk. The heat of pasteurisation kills RB51, other types of Brucella, and a variety of other disease-causing bacteria.

Human brucellosis cases in the United States have fallen from about 3,000 per year in the 1950s to 100-150 –per year in recent years. Most cases of brucellosis in the U.S. are caused by strains other than B. abortus and occur in people who travelled to countries where Brucella is more common and drank contaminated milk or had contact with infected animals. Among cases who acquired brucellosis in the U.S., infections occur from contact with feral swine or, more rarely, dogs, or because of accidental exposures among lab workers testing samples from ill people.